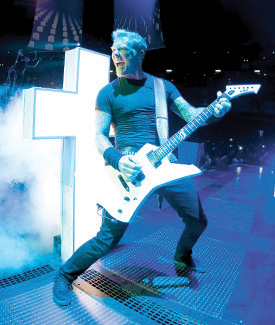 FILM The 3D IMAX concert film may be lurching toward cliché status, but at least Metallica: Through the Never has more bite to it than, say, this summer’s One Direction: This is Us.

Director Nimród Antal (2010’s Predators) weaves live footage of the Bay Area thrash veterans ripping through hits (“Enter Sandman,” “For Whom the Bell Tolls,” etc.) into a narrative (kinda) about one of the band’s roadies (The Place Beyond the Pines‘ Dane DeHaan). Sent on an errand, the hoodie-wearing hesher finds himself caught in a nightmarish landscape of violence, fire, hanging bodies, masked horsemen, crumbling buildings — more or less, the dude’s trapped in a heavy metal video, and not one blessed with particularly original imagery. Yet despite Never‘s deliberately baffling storyline, it’s also often very literal: a fight scene set to “Battery,” for example.

Lead guitarist Kirk Hammett — other members: singer-guitarist James Hetfield, bassist Robert Trujillo, and drummer Lars Ulrich — is the band’s resident movie fanatic; for proof, see Too Much Horror Business, the 2012 book chronicling his memorabilia collection. (Through the Never offers a larger-than-life chance to ogle his Boris Karloff guitar.) Though it contains unsettling elements, Hammett admits that Through the Never isn’t really a horror film.

“We needed to find a concept that fit all four of us as people, as well as Metallica as a band,” he says, holding forth a day after the movie’s Metreon premiere. “There were a lot of different concepts thrown at us. Most of them were science fiction — and while I’m a big sci-fi fan, I just don’t see Metallica making a sci-fi movie. But Nimród’s concept was loose enough that we were able put our own ideas and personalities, and the band personality, into it. Sure, it would’ve been great to have a scary, 60-foot troll tromping around with a Metallica shirt on. It would have been fun for me. But I don’t know if it would have been as much fun for the other guys!”

About that “loose concept” — though Hammett says the decision not to give DeHaan’s character any dialogue was so “anyone could understand [the film] anywhere in the world,” he admits that some viewers have been confused by the story.

However, “the great thing about this movie is that it’s open to interpretation,” he says. “It’s being told in a metaphoric fashion, which means that depending on who you are, and where you are in your life, you’re going to have a different interpretation of this movie. And that’s the beauty of it — it’s like Metallica lyrics. It acts almost as a mirror to what your own life perspective is. That is something that we wholeheartedly chase in all our creative endeavors — we want something that is not, ‘This is a square and that’s it.’ That’s boring! We want something like, ‘Is this a rectangle in a different dimension that has capabilities that we don’t even know about?’ It’s much more of an interesting approach, and I think it was the right one to take with this movie.”

Of course, this isn’t the first time Metallica has been the focus of a feature film — prior to Through the Never came searing, deeply personal 2004 documentary Metallica: Some Kind of Monster.

“Two different animals altogether,” Hammett says of the films. “Monster was a documentary about four people and their real struggles against adversity. This is more along the lines of pure entertainment, being able to put forth a concert scenario and tell a story at the same time. That was really unique and cool for us.” *

METALLICA: THROUGH THE NEVER opens Fri/27 in Bay Area theaters.