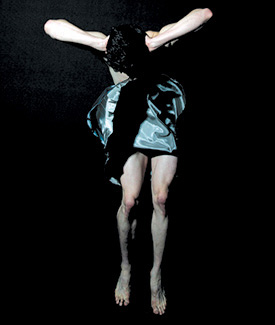 DANCE It’s still early in the new season, yet two programs this past weekend offered worthwhile perspectives on new dance. “New” in this case doesn’t necessarily indicate right out of the oven, but the pieces were novel to these eyes, and more importantly, they looked fresh and left behind a pleasant aftertaste.

Every year Dance Mission Theater schedules two first-come, first-serve choreographer showcases, one in the fall, the other in the spring. Rarely have these evenings been a complete washout. Sure, you get the occasional novice who yet has to find a way to navigate the space (this time, that spot belonged to Erica Pinigis’ A Small and Rapid Sorrow). In the only other single-dancer piece, Todd Eckert’s hermetic Sole Soul felt like it was channeling someone being imprisoned without any possibility of escape.

The evening started on a ghostly note and ended with a paean to percussive feet. Megan Finlay’s Blood will have Blood looked suspiciously as if it were inspired by Macbeth, in the way that the man of the house was repeatedly attacked by something that nobody else could see. The piece, though a little thin, had a good sense for building suspense, starting on a comedic note but quickly becoming sinister.

Una Fusion de Percusiones’ snappy and friendly competition between Vanessa Sanchez and Arturo Flores delighted with its sense of freedom and discipline. While Flores mainly stuck to Mexican-flavored heel work, Sanchez spiced hers up with jazz and tap.

San Mateo’s Monsoon Dance Company brought a group of pre-teen girls in an exceedingly simple but enthusiastically performed Deva Ganesha, a Bollywood-style homage to the pot-bellied Indian god. Natasha Carlitz and Erika Tingey, all in white, wove their trajectories through pathways delineated by white balloons. If there was a subtext, as Subtext implied, it escaped me.

A trio of Afro-Caribbean dancers — Adonis Damian, Jose Carlos Alarcon, and Delvis Savigne Frinon — excelled in Reggaeton Fusion’s mostly unison choreography that benefited from these fine dancers’ skill, energy, and collaboration. They returned later in Ramón Ramos Alayo’s Untitled, which might have been a preview excerpt of a new piece Alayo will premiere in November. Set very closely to a lushly romantic orchestra score, the work featured dancers who kept the choreography aloft.

ONCE UPON A MATTRESS

Though badly in need of better seating facilities, the space is becoming popular as a performance venue. But it has never looked better than in Dawson’s intelligent and spacious choreography, bathed in Patrick Toebe’s bluish lighting design that highlighted the performers one minute before swallowing them up the next.

Dawson, a former member of Alonzo King Lines Ballet, decamps for Italy — he is also a mosaic artist — for extended periods of time. For a choreographer, fabbrica is a major achievement, mesmerizing, puzzling yet ultimately convincing. Of course, he carries within him much of what he learned during his 18-year tenure with King. But he made the fractured lines, the fierce attacks, and the collage approach his own.

There are moments when you began to wonder where what looked like independent units were going, besides showcasing excellent dancers at their best. But in the end the pieces came together. It felt like a veil had been yanked away and, all of a sudden, you clearly saw what had been a journey for these six dancers after all. The exception was Jeffrey Van Sciver, who after an astoundingly virtuosic yet silken solo, performed in a diaphanous white skirt that beautifully set off his dark skin, simply disappeared. Why? Was his presence a guiding force no longer needed? Dramaturgically, this seemed weak.

Dawson brilliantly balanced the vigorous, individualized center-space dancing with a haunting pictorial quality, in which the performers devolved into black silhouettes against the silver coated black wall. Moving friezes, they melted away.

Alton San Giovanni’s tempestuous score excellently supported the choreography. The dancers: Jordan Drew, Oliver Shock, Ilaria Guerra, Christopher DeVita, Jessica Wagner, Isaiah Bindel, and, of course, Van Sciver — who next month is starting his first season with Lines Ballet — performed at the top of their impressive abilities. I want to see them again. *