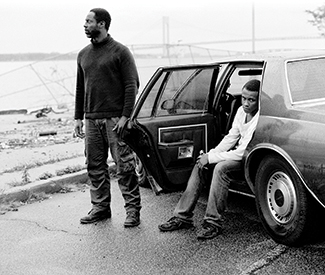 FILM On Oct. 24, 2002, a man and a teenager were arrested upon being found sleeping in their car at a Maryland rest stop. That ended the three-week reign of terror known as the Beltway sniper attacks, in which 13 people were shot (10 fatally) in a wide area surrounding Washington, DC. When facts started coming to light, what seemed most striking about these attacks were their utter randomness — the perps had pre-selected locations but not victims, the latter being just passers-by ranging from age 13 to 72 — as well as the curious relationship between the two shooters.

Forty-one-year-old John Allen Muhammad had met 17-year-old Jamaican Lee Boyd Malvo three years earlier when on a vacation with his three children in Antigua. (He’d actually kidnapped them for this purpose.) Malvo, who was more or less parentless, was sorely in need of guidance and a guardian. Taken back to the US by his new protector, the boy got a perverse dose of both, and was too grateful, gullible, or intimidated to question it.

A former US Army mechanic and driver, Muhammad lived an itinerant lifestyle with his new “son,” moving them from one end of the country to another with very little stability. Meanwhile Malvo was encouraged to steal — shoplifting the Bushmaster XM-15 with which they later committed the Beltway attacks — schooled in expert marksmanship, and inculcated in his “dad’s” bizarre antisocial, paranoid, punitive ideas about “waking people up” to the “evil” in the world. Phase One of the plan was purportedly to kill six white people a day for one month; the final goal was either (according to defense attorneys) to regain possession of Muhammad’s biological children, or (according to Malvo) to extort millions from the government to create a boot camp for other boys, who’d be trained to help trigger some murky downfall of our corrupt society.

Alexandre Moors’ first feature Blue Caprice offers an unsettling if ambiguous take on a case that still leaves a lot of questions unanswered. Here, Lee (Tequan Richmond) has been abandoned by his negligent mother when he spies tourist John (Isaiah Washington of Grey’s Anatomy) frolicking with his younger kids; hungry and otherwise needy, he follows them around, eventually making a desperate bid for the older man’s attention.

Taken to the US, Lee accepts whatever strange wisdom his minder has to offer — that the latter’s ex-wife is “a fucking vampire;” that he himself needs brutal “training” that includes his being left tied to a tree deep in a forest; and that if he really loves his “dad,” he needs to complete various tasks as ordered, including shooting a particular woman point-blank in front of her home — even if later it turns out she “might have been the wrong woman.”

All this seems some sort of paramilitaristic preparation. But it’s also an outlet for John’s bottomless, often scarifying anger, and his need to create someone as emotionally disconnected from other humans as himself. For a while they stay with a former Army buddy and fellow weapons enthusiast (Tim Blake Nelson) who’s too much of a good ol’ boy to sense anything wrong about the visitors. But Ray’s wife (Joey Lauren Adams) does, and there’s tension in the way her suspicion might make her the latest woman John regards as an enemy.

The shootings themselves are dealt with very discreetly in Blue Caprice, though it’s chilling enough just watching the two leads arbitrarily pick targets. Moors and scenarist Ronnie Porto aim to conjure an atmosphere of isolation and indoctrination where we’re nearly as blindsided as Lee; the nondescript American settings they temporarily inhabit become hostile environs he and John infiltrate like spies for reasons that understandably wouldn’t make a lick of sense to anyone else. “They don’t realize the house of cards they live in. All it would take it one little push,” Muhammad says ominously, seeing himself as one-man destroying angel of some Great Lie. His delusions are as incoherent to us as they remain in real life.

While its deliberate omissions and psychological gaps are somewhat frustrating, Blue Caprice does cast a spell — aided considerably by Brian O’Carroll’s artful photography (no shaky-cam here) and a fine, unpredictable original score by Sarah Neufeld and Colin Stetson. The real Muhammad tried claiming that no proof could be found that he actually committed any of the shootings. That notion was tossed aside in court, and he died by lethal injection — calling himself an “innocent black man” to the end — in September 2009. Malvo was sentenced to life without parole. He revealed little in his Virginia trial, but by the time of his subsequent prosecution in Maryland, he no longer felt the need to protect Muhammad, and denied he’d been the sole triggerman. Just last year he came forward to say that Muhammad had sexually abused him.

Since the trials, the two have been linked to as many as 12 unsolved additional killings. What’s perhaps most disturbing about their case is that, strange as it is, in today’s US such conspiratorial murder of strangers doesn’t really seem that strange at all. Think of it this way: in 1976, the plot of Taxi Driver seemed improbable. But we now live in a world of well-armed Travis Bickles, prepping themselves to avenge some grave personal injustice they think everybody else must pay for. *