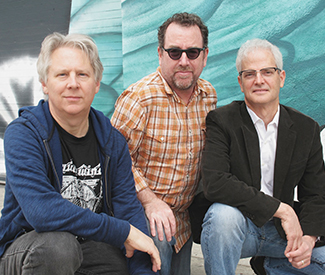 MUSIC As Urinals folklore goes, the band was formed in 1978 by a group of five UCLA students looking to have a spot in their dorm talent show. Guitarist and vocalist John Talley-Jones recalls the band’s earnest beginnings as an experiment that evolved into something much more. “We were in film school, not approaching it as musicians, but as conceptual artists,” Talley-Jones says. “It was an experiment to see if you put five people with limited music in a room and see what they can do with one quasi guitarist. It was like an art project.”

And 35 years later — save for a decade-long hiatus and a few changes in the lineup — the Urinals are still at it. The group play’s Oakland record shop Stranded’s one-year anniversary party this weekend, and has a new full-length in the works for next year (label yet to be determined).

Coming forth in a time when virtuoso-like musicians were most valued, inexperience and ineptitude were the Urinals’ calling card — from music on down to the etching of a garbled face on its Sex E.P. (Happy Squid Records, 1980) and anthology Negative Capability…Check it Out! (Amphetamine Reptile Records, 1997).

“When I think of the Urinals, I see a band that got together in ’78, and developed in the last 35 years,” Talley-Jones says. “Not many people have heard or recognized material past our first few releases.”

And just as people grow and develop, so did the Urinals. In their infancy, the Urinals were known for their raucous, simplistic sound. As the band members matured and learned how to play their instruments, the band reached its adolescent stage, becoming an admittedly post-punk outfit dubbed 100 Flowers for a brief stint during the ’80s and playing shows during the 2000s.

“I remember starting out with the Urinals, feeling that I had to carry on a certain stage persona, mine being theatrically psychotic” Talley-Jones says. “But as time wore on, I grew into my own. When I first started I would be anxious the entire day before the show. After the first few years, that disappeared.”

Though many elements have shifted with the band throughout the years, one thing remains pertinent: DIY ethics. In the age of virtuoso-like butt-rock, Talley-Jones and fellow band mates accepted the fact that two-chord songs seldom lasting more than a minute about just being a bug (“I’m a Bug”) or a hologram (“Hologram”), weren’t exactly a hot commodity. Known for putting out many of their releases on self-owned record label, Happy Squid Records, self-production was a necessity.

Talley-Jones recalls being approached by Vitus Matare, keyboardist for Los Angeles power punk outfit the Last, about recording the Urinals.

“Everything was starting from the ground up,” Talley-Jones says. “Of course Vitus Matare recorded us initially, but following that we taught ourselves how to write, play, and distribute. We had no misapprehension to ever be signed, because what we were doing was not marketable to the masses.”

That being said, the Urinals appreciate doing things on the cheap — that’s why the band is playing this free show with the original lineup (comprised of Talley-Jones, Kjehl Johansen, and Kevin Barrett), in honor of an East Bay record store.