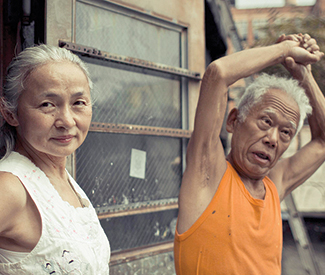 FILM At least since Grey Gardens in 1975 provided a peek at mother-and daughter eccentrics living in squalor — distinguished from your average crazy cat ladies by being closely related to Jacqueline Kennedy Onassis — there’s been a documentary subgenre devoted to, well, weirdos. Errol Morris and Werner Herzog have devoted a sizable chunk of their output to them, those people who might make you nervous or annoyed if they lived next door but are fascinating to gawk at for 90 minutes or so. Like Cate Blanchett’s fictional wack job in Blue Jasmine, their dysfunctionality is entertaining at a safe distance.

The protagonists in Zachary Heinzerling’s Cutie and the Boxer aren’t nuts, but they’ve been together over four decades without their problems really changing or getting any better. Ushio “Gyu-Chan” Shinohara was a somewhat notorious artist in Japan’s fertile avant-garde scene of the 1960s — we see footage of him sporting a Mohawk early in that decade, non-conformity already in full flower. His “neo-Dadaist” work already consisted largely of grotesque pop-art sculptures made out of found junk and large-scale canvases that, in a variation on Pollock’s action painting, he executed by battering paint onto them with boxing gloves. (When he finishes one, he raises his aims in triumph, like Rocky Balboa.)

In 1969 this wild man decided he needed a bigger stage, so he moved to New York. An early 1970s TV documentary excerpted here calls him perhaps “the most famous of the poor and struggling artists in the city,” noting that while his often outsized work gets a lot of attention, people seldom actually want to buy it. This is a situation that, we soon learn, hasn’t altered much since.

Gyu-Chan was 41 when he met wife Noriko, a 19-year-old art student also from Japan. She was swept up in the “purity” of his art and lifestyle; within six months she was pregnant with their only child, Alex (also a talented visual artist). In hindsight, she flatly tells us “I should have married a guy who made a secure living and took responsibility for what he did.”

We first meet the duo on his 80th birthday. It’s hardly a conventionally comfortable old age — in a tone so weary it can hardly be classified as nagging, Noriko reminds him that they’re late with the rent on their fairly large yet cluttered Brooklyn apartment-studio, and the utilities are about to be cut off for lack of payment. You get the feeling all this is business-as usual, and that the cheerful, oblivious, still-energetic Ushio would’ve been out on the street years ago if not for her insistence that he actually make some money once in a while.

It’s a classic dysfunctional-yet-still maintaining marital dynamic: the easygoing, charming, eternal bad boy herded about as successfully as a cat on a leash by the long-suffering wife. He no longer drinks — having stopped on doctor’s orders just a few years ago — but he’s still a manboy making junk-art mock motorcycles and pounding large canvases … and not making much money. His reputation remains incongruously far greater than his means, even if we see a Guggenheim representative ponder making a purchase of one of his “historical” pieces.

Meanwhile Noriko, who one senses has long resented living under the shadow of this larger-than-life figure, feels she’s finally escaped his influence in her own work. (It doesn’t help that, when acknowledging that she’s his occasional, reluctant assistant, Gyu-Chan confides “The average one has to support the genius.”) She’s working on a series of narrative, cartoon-like drawings depicting the titular “Cutie” and “Bullie” — blatant stand-ins for herself and Ushio, chronicling her long saga of disillusionment as a classic “good girl” who married a bad boy, to the detriment of her own art and the child she had to raise with “drunk adults hanging around him all the time.” (It is one of the film’s frustrations that we never really get Alex’s perspective on this, though he’s clearly a wary veteran of his parents’ misbehaviors and judgments.)

If her husband is discomfited by this exposure of their private life — even when the “Cutie” series (which is turned into simple animation throughout the documentary) is exhibited in conjunction with his own latest gallery show — he doesn’t show it. But then, she does the fretting for both of them.

A quiet, almost meditative portrait of messy lives, Cutie and the Boxer doesn’t really answer the question of why these two remained together despite all (her) dissatisfaction. When he accepts an invitation to go to Japan — cramming a couple of small sculptures carelessly in his suitcase to sell while there — she says “suddenly the air clears” whenever he’s gone, and we see her lighten up considerably while showing a fellow Japanese expat friend her latest work. But you get the feeling Noriko, while hardly an emotional open book, loves her burdensome, unruly spouse more than she’d admit. Or at least she’s accepted the “struggle” of life with him as her own goading raison d’être. You know the saying: life is short, art is long. *

CUTIE AND THE BOXER opens Fri/23 in San Francisco.