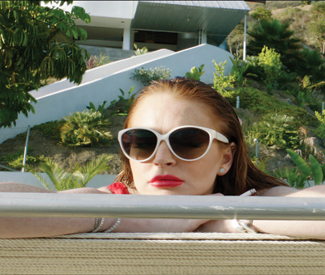 FILM Now that “train wreck” is an official celebrity category popular media ignores at its peril, certain people and projects are deemed doomed automatically. Lindsay Lohan can’t redeem herself — she’d lose her entertainment value by regaining any respect. Ergo, The Canyons — the first theatrical feature she’s starred in since 2007, the year of triple A-bombs Georgia Rule, Chapter 27, and I Know Who Killed Me — was earmarked as a disaster from the outset.

How could it be otherwise, with the now-disgraced former Disney luminary co-starring opposite porn superstar James Deen in an envelope-pushing screenplay from literary bad boy Bret Eaton Ellis (Less Than Zero, American Psycho)? Its apparent rejection from the Sundance and SXSW festivals, plus Lohan’s widely reported difficulty on set — not to mention Ellis’ dissatisfaction with the “langorous” final results — only heightened a sense that The Canyons would be a pretentious, full-frontal crapfest. Even US distributor IFC has been highly reluctant to let anyone see the film more than a week in advance of its opening dates, as if assuming any reviews would be damning ones.

We live in a reality-TV-dominated world of sharply divided winners and losers now. Now that she’s typecast as an off screen fuckup, Lohan’s professional endeavors must follow suit. They have to be bad, because we enjoy her failing so much.

But The Canyons isn’t exactly bad, despite the gloatingly negative publicity rained on it. (And despite the fact that we do, eventually, catch a glimpse of Deen’s famous johnson.) Instead, it’s a middling exercise in upscale erotic-thrillerdom, beautifully crafted (on a Kickstarter dime), clever yet superficial in terms of psychological depth. Its indictment of jaded LA life centers on glamorous couple Tara (Lohan) and Christian (Deen). The latter is a producer slash trust-fund brat who’s pushed an “open relationship” credo onto his trophy spouse, yet turns pathologically jealous once it’s clear she’s cheating with wannabe actor Ryan (Nolan Funk), the boyfriend of his former assistant Gina (Amanda Brooks).

This isn’t headed anywhere pleasant. Ellis trades on his usual themes of corrosive privilege, sex, and violence to deliver a rather simplistic if sardonic lesson in Hollywood amorality that director Paul Schrader angles toward credibility. His sleek feature is the latest for an important American filmmaker who wrote the scripts for Scorsese milestones Taxi Driver (1976), Raging Bull (1980), and The Last Temptation of Christ (1988), as well as writing-directing such less generally heralded yet admired titles as Blue Collar (1978), Hardcore (1979), American Gigolo (1980), and Affliction (1997).

I caught up with Schrader in a recent phone interview. He said the project came about because funding for another Ellis screenplay he was going to direct fell through. “I said, ‘What you do, Bret, writing about beautiful people doing bad things in nice rooms, is something we can do for much less money.'”

Asked if it was a difficult shoot, he says, “Every shoot is difficult. Sometimes you run out of money, sometimes the weather turns against you. And sometimes you have high-strung performers. Lindsay needs to live in a world of crisis. It’s unnecessary — but that’s what she needs.”

When it’s suggested that The Canyons is like American Gigolo with women now the primary sexual commercial properties, Schrader corrects: “It’s with smart phones as the primary sexual commercial property.” The characters’ obsessive use of social media — they spend dinners barely maintaining conversation as they stare at their phones, and use Grindr-like apps for casual hookups — is one aspect of their alienated state.

Another is that they work in a film business when “the whole notion of theatrical cinema is changing. That was the concept from the beginning: making cinema for the post-theatrical era.” (The Canyons, already available in streaming formats, opens with a montage of shuttered Los Angeles movie houses.) “This was designed to be distributed through the Internet and cable. I saw these kids as not really caring about movies. I told the cast this was about some twentysomething Angelenos who went to see a movie, but the theater closed. And they stayed in line because they had nowhere else to go.”

THE CANYONS opens Fri/9 at the Roxie.