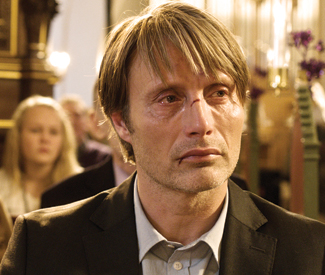 FILM Mads Mikkelsen has the kind of face that is at once strikingly handsome and unconventional enough to get him typecast in villain roles. (A good Hollywood parallel would be Jack Palance in his prime — they’ve got the same vaguely Slavic features, with sharp cheekbones and narrow eyes.)

He’s certainly known best, if not exclusively, as a villain in countries where Danish cinema has a non-existent or minor presence. (Which is to say, most of the world.) Like so many great foreign-accented actors, he got his big international break playing a bad guy in a James Bond or other blockbuster action series — in his case an actual Bond, as groin-torturing gambler Le Chiffre in 2006 franchise reviver Casino Royale. He was mean again in the big-budget 2011 flop Three Musketeers remake, and is currently creeping TV viewers out as a young Dr. Lecter on Hannibal.

Those roles are pretty much all American viewers know about Mikkelsen. But if you’ve been following Danish movies since 1996, when he debuted in the first of Nicolas Winding Refn’s Pusher trilogy — and you should have been, even years before that — you’d know he’s an endlessly charismatic actor who’s played many sympathetic roles. Several have been for leading Danish writer directors Anders Thomas Jensen (2005’s Adam’s Apples), Ole Bornedal (2002’s I Am Dina), Susanne Bier (2002’s Open Hearts, 2006’s After the Wedding) and Lone Scherfig (2002’s Wilbur Wants to Kill Himself). Why he hasn’t made a movie for Lars von Trier, I dunno — though he’s probably a happier person for it.

He’s a very fine actor, the kind whose international profile is eventually assured — even though Hollywood, which invariably magnetizes such actors with its engorged salaries and publicity, has so far found nothing else for him to do than play diabolically intelligent monsters. The Danish movies reveal other sides: the gradual crumbling of his charity-worker’s character’s well guarded emotional defenses in After the Wedding, for instance, or the near farcical yet eventually beatific blind faith of his minister in Adam’s Apples, who holds fast during a blackly comedic avalanche of misfortunes echoing the Book of Job.

His ability to evoke both sympathy and a suspicion of otherness are particularly well deployed in The Hunt, which won him the Best Actor prize at Cannes last year. Strangely, it’s Mikkelsen’s first film with another major Danish writer-director, Thomas Vinterberg — perhaps because the latter spent most of the interim time since 1998’s Dogme triumph The Celebration making weak English-language features.

In the very Danish Hunt, Mikkelsen plays Lucas, a benign lifelong small-town resident recently divorced from his son’s mother (with whom he has ongoing custody disputes), and who currently works at the local kindergarten. One day one of his charges — the youngest child of his best friend, in fact — says something to the principal that suggests Lucas has exposed himself to her. We’ve already seen how the little girl, who has obvious if unexplained psychological issues (symptomized by her superstitious skittishness about stepping on any sidewalk or tiling line), might’ve been led to parrot elders’ statements through sheer infantile confusion and willingness to say what adults apparently want.

Once her misguided “confession” is made, however, Lucas’ boss immediately assumes the worst. She announces her assumptions at a parent-teachers meeting (from which Lucas has already been excluded) even before police can begin their investigation. By the time they have, the viral paranoia and suggestive “questioning” of other potential child victims by all parties has created a full-on, massive pederasty scandal with no basis in truth whatsoever. Lucas is shunned (even beaten) by people he’s known all his life.

The Hunt is a valuable depiction of child-abuse panic, in which there’s a collective jumping to drastic conclusions about one subject where everyone is judged guilty before being proven innocent. (If you doubt that judgment, look on any gay-related Yahoo news comment-board, in which some posters will invariably state the “fact” that all gay people are pedophiles and/or were “turned” gay by being molested as children.) Many parents fervently believe “children don’t lie” — yet they do all the time. Sometimes inadvertently because they don’t understand the complexities of a situation, sometimes blatantly because they’re simply trying to tell adults what they want to hear.

The Hunt‘s emotional engine is Lucas’ horror at the speed and extremity with which he’s ostracized by his own community — and its willingness to believe the worst about him on anecdotal evidence. Mikkelsen’s imperfect yet upstanding father and teacher here is a fine parabolic illustration of such predator-hyperconscious adults’ victims. Engrossing, nuanced, and twisty right up to the fade-out, The Hunt questions one of our era’s defining public hysterias. In our own society, many people believe in entrusting guns to young children whom they wouldn’t dream of thinking mature enough to drive, drink, or absorb basic sex ed. Nonetheless — and this is not to remotely dismiss the existence and prosecution of genuine child sexual abuse cases — they assume children always know what they’re talking about when they’re nose-led into accusing elders of vaguely grapevine-heard behaviors they probably don’t yet understand the actual meaning or consequences of. *