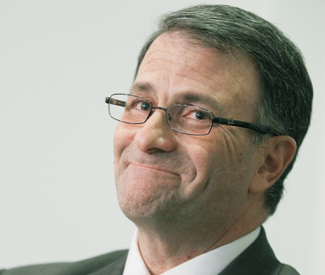 Jack Abramoff says “legalized bribery” is corrupting our political system, and as a lobbyist who went to prison for taking the practice of buying favors from Congress to obscene new depths, he should know. But if we’re relying on him to help reform that system, a cause he’s now taken up, we could be in real trouble.

“I didn’t create a new way of lobbying, I just did more of it,” Abramoff told the students, noting that while some lobbyists had a few good tickets to Washington Redskins or Wizards games to give away to members of Congress, he had 72 of them. And while some lobbyists would take members golfing, “I would put them on a Gulfstream and fly them to Scotland. What’s the difference? It’s still playing golf.”

It was particularly strange for someone of Abramoff’s obviously questionable moral fiber to be addressing political students at this Jesuit-run academic institution, whose local advertising slogans include “How to succeed in business and still go to heaven” and “Wicked smart without the wicked part.”

Yet forgiveness is supposed to be divine, and the instructor who lured Abramoff to speak with his class, local lobbyist and political consultant Alex Clemens, was certainly pleased to attract someone with Abramoff’s inside knowledge, avoiding Abramoff’s usual speaking fees of up to $20,000 by piggybacking on a Southern California speech he gave and paying only his airfare.

I was a bit more skeptical of a guy who equates political donations with bribery while hawking a book and narrow reform proposal — while at the same time soliciting corporate lobbying clients and telling the San Francisco Chronicle that Silicon Valley should be spending far more money to influence politicians.

“It needs a much bigger view of political involvement,” Abramoff told the Chron. “It should be spending much more. They’re not playing as smart as they should, and they could lose big.”

That’s part of the muddle of contradictions that defines Abramoff and his advocacy today, which is consistent with the anti-government, wealth-worshipping conservatism he has pushed with missionary zeal since his college days, along with pals Ralph Reed and Grover Norquist, who still play key roles in keeping religious fundamentalists and the rich in the Republican Party fold.

“I’m not against money in the system, I’m against money being used the wrong way in the system,” Abramoff told me after the talk, as I probed the contradictions in his statements and views. My efforts to pin him down caused him to scornfully brand me a “socialist,” the old bully replacing the affable face he showed the students.

“Money is a tool,” Abramoff told me.

Abramoff is also a tool, I decided as I listened to him, although it’s still tough to discern who is wielding him now and where this effort may be headed.

Abramoff told the students that even after he got busted in 2005, for a long time he indignantly wondered why he was being prosecuted for the same sorts of actions that were endemic to Washington DC. Eventually, he began to realize he had done something wrong.

“I thought maybe some of this [the charges against him] is right,” he said. “I decided to be honest with myself. Am I the saint I always thought I’d been, or the devil they said I was?”

Yet in the end, Abramoff never did really rethink his own worldview and history — from his early days of shilling for the South African government against efforts to end apartheid to later bribing members of Congress to oppose regulation of sweatshops and sex trafficking in US territories — he just blamed the political system.

“I thought this system is maybe not right,” he told students studying to be a part of that system. “I thought when I got out, I should probably try to help.”

So he wrote a book, Capitol Punishment: The Hard Truth About Corruption From America’s Most Notorious Lobbyist, and he says that he’s been developing political reform legislation that he intends to start pushing next year along with unnamed others.

Abramoff has consulted with Harvard Law School professor Lawrence Lessig, who founded Rootstrikers to push political reforms, but Abramoff doesn’t support many of the central tenets of that and other reform groups, including public financing of elections and overturning “corporate personhood” court rulings that deem political spending by the rich to be a free speech right.

In fact, Abramoff is still a right-winger who shows little interest in limiting the ability of wealthy corporations and individuals to freely spend their money on political candidates and issues, placing him at odds with pretty much the entire political reform movement.

Phillip Ung, a spokesperson for Common Cause — which has been working on these political reform efforts for decades — was a little skeptical about getting help from someone who once embodied the most corrupt and excessive aspects of the current system.

“As much as we enjoy his newfound support for political reform, we also understand that he has a debt to pay, and not just to society,” Ung said of the $44 million in restitution that Abramoff still owes to his victims.

Ung said that a stark example of political corruption like Abramoff represents does help the cause, but that has little to do with his current advocacy. “The reform flag at the federal level goes almost nowhere if there’s not a political scandal,” Ung said, although even that isn’t saying much because, “Congress and DC only have tolerance for political reform one every 10 years or so.”

With Democrats now overwhelmingly controlling California’s Legislature and executive offices, Ung sees opportunities for important reforms here. The most promising is Senate Bill 27, which would require political groups that raise more than $500,000 to disclose their donors.

By contrast, Abramoff’s proposal seems tepid at best, and his strategy for selling it relies on using political spending to elect sympathetic people to Congress, which would seem to undermine his reform message almost as much as pitches to corporate clients to hire him for lobbying consulting services (see www.abramoff.com).

“He seems to be going back to his old ways,” Ung said of Abramoff.

Abramoff said his legislation would broaden the definition of lobbyist, limit their campaign contributions to $500 per election cycle, and prevent public officials from working as lobbyists for 10 years after they leave government.

Then Abramoff said that he and his unspecified “we” will dump money into six contested Congressional races in 2014, trying to elect three Democrats and three Republicans who pledge to support his legislation, following that up in 2016 by targeting 25 to 50 races.

“Then and only then will Congress take it seriously,” Abramoff concluded, arguing that politicians respond to losing their jobs more than other means of persuasion. He’s going to use aggressive political spending to win the reforms he seeks, which don’t really do anything to limit political spending.

When I asked Abramoff how increased political spending can reform a political system corrupted by money, he replied, “You play with the tools and the battlefield you’re on.”

THE SYSTEM, OR ITS SPONSORS?

Abramoff blames Congress for corruption far more than the lobbyists or wealthy special interests who are doing the corrupting, noting how difficult it is to get political reforms approved by legislators who want to later cash in on their public service.

“The lobbyists are a response to the system set up by Congress,” he told the students, building on his earlier point that “99 percent of everything I did was legal, and that’s a bigger deal than the 1 percent that was illegal. That’s what has to change.”

But he acknowledges that reforming the system will be “impossibly difficult” because those who are invested in the current system will always find loopholes to any new regulation. “They’re extremely brilliant people and their goal is to get around things,” he said.

Omitted from Abramoff’s recitation of what’s wrong in Washington are the people doing the corrupting, that other 1 percent, the very rich. When I asked him about how he can really attack institutionalized political corruption without going after the cash that feeds that corruption, he told me, “I tend to be nervous about a political approach that says, ‘It’s the rich.”

Abramoff actually supports the Supreme Court’s controversial Citizens United ruling, which ended controls on the political spending of wealthy individuals and corporations, telling the students, “We all want certain corporations to have the rights that we individuals have.”

Abramoff also seems to dismiss the possibility of a grassroots political reform effort, saying that any change in the system would need support from both the left and the right, and the latter will kill any effort to actually removes private money from political campaigns.

“You’re not going to have federal financing of elections. The right will die before they let that happen,” Abramoff said.

That might have been the most insightful thing that Abramoff said to the students, although he certainly didn’t intend it the way that I heard it: maybe the right needs to die, in the political sense, before the system that Abramoff both decries and supports will change.