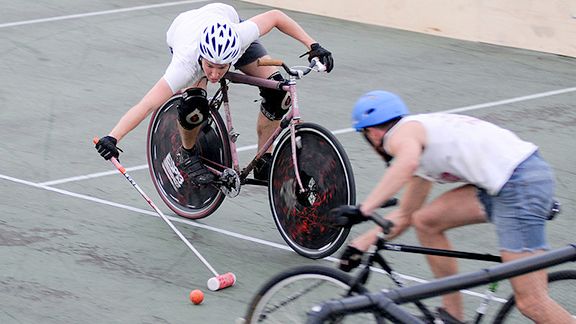 IN THE GAME The lights at Jose Coronado Playground stay on until 10 p.m. Like most playgrounds, it has a life of its own: a heart, a brain, a bloated liver, and a basketball hoop. In fact: two — but most nights the basketball court is cut in half by an extension of the tennis court to create a bike polo court. Which is cut in half by the slightly grassy crack between tennis-top acrylic and just plain asphalt.

So you don’t always get a clean roll, but that’s life.

Also life: the ragtag collection of drunks and disorderlies congregating on the sidewalk near the 21st St. entrance to the courts most evenings. They bring chairs, or huddle around the trash bin there.

One of their number, long gray hair scare-crowing out from under his hat, saunters onto the empty half-court with a worn black basketball and starts shooting free throws. He’s wearing a suit jacket. After missing four straight from the line, he backs up to almost half court, heaves awkwardly from his rib cage, and finally sinks one.

On the unbicycled part of the next-door tennis court, a couple of much younger folks, a pink-haired woman and a regular ol’ facial-haired man, are riding around in electric-wheelchair-based cardboard robots. They look like something from a sixth-grade science fair, modified boxes with marker-drawn robot features. One has corrugated heating ducts for arms, dangling down to the pavement.

“You go on ahead without me,” I say to Hedgehog.

“Do you want me to bring you something?” she says.

Nor are homemade robots. But I have to ask, so while Hedgehog is walking on to 24th and picking out our flavors, I manage to make my way into the driver’s seat for a test drive. There is a camera mounted high on the chain-link fence surrounding the playground, and you have to drive by video, which is transmitted to a pair of goggles.

It’s like playing a video game from inside the screen. You are the little thing that you’re looking at.

Zipping around pretty much blindly, I get almost immediately dizzy and lost, and almost crash into some bikes.

They’re going to race these funny wheelchair robots next day at SubZERO, San Jose’s annual subcultural festival, and I wish them luck.

While I’m waiting for Hedgehog to get back with our ice cream, I watch a little bike polo on the other side of the tennis net. It’s a pretty intense pick-up scene. Three-on-three, with a basketball hoop and a light pole in the field of play.

Most of them wear helmets. Some, knee pads and elbow pads. They drink beer, they smoke. One girl is playing with a cigarette in her mouth.

Plastic mallets awhirl, they circle and sprint, skid, bounce, and sometimes fall. If your foot touches the ground, you have to touch one of the mid-court posts with your mallet before returning to play.

Another woman scores her second goal of the game and a dude against the fence, waiting his team’s turn, hollers, “My nipples are hard!”

“I didn’t know he had nipples,” quips a guy on a bike, racing back to defend his goal.

On the hard-top soccer pitch other side of the fence from all this, a couple of moms are kicking around with their kids. I fantasize about joining them, but here comes Hedgehog with our ice cream: mango and carrot, and basil lime.

The basketball scarecrow has moved on, and now two short guys are playing one-on-one. Someone else is practicing his fancy dribbling in the shadows, and occasionally pulls up and bounces a shot off of a light pole.

Twenty Major League Baseball players face possible suspension for alleged use of performance enhancing drugs, and these moms, kids, kooks, and badasses are out here every time I walk by, which is often.

Between Shotwell and Harrison on 21st Street in the Mission. Jose Coronado Playground. This has been a night in the life. Of it.

Newcomer Nights are on Wednesdays, in case you’re interested in getting in the game, bike polowise.

Otherwise, it’s not a bad spectator sport. Mondays, Thursdays, and Saturdays they play, from seven to ten. Check it out.