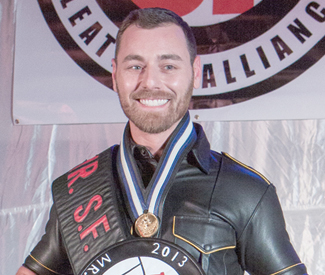 It’s all the perfect, thigh-high-booted lead-in to a gloriously kinky summer, bracketed by those essential Folsom Street Events (www.folsomstreetevents.com): scruffy gay Up Your Alley Fair on Sunday, July 28 and pansexual bacchanal Folsom Street Fair (celebrating 30 years, woah) on Sunday, September 29. Those two events have grown so much they’ve recently been expanded, as have their satellite parties — this year, Folsom’s muscle-hunk Magnitude party will take over two huge venues, Sound Factory and nearby Terra, as will its more queer-friendly counterpart Deviants, at Beatbox and Mist. Meanwhile, Folsom Events is planning its first Pride float — at 48-feet, it needed a special parade provision, because it’s “too big.” Ummm.

“Well, people are still having the dirty sex. We’re just trying to give them as much as they can handle — and they can handle a lot, apparently.” laughs sparkle-eyed cutie Demetri Moshoyannis, Folsom Events’ executive director, when I bring up how much his organization keeps proving that rumors of the leather scene’s imminent demise are unfounded. (Like many close-knit communities, the leather one’s in a constant tizzy over dying out — due to the Internet, mainstream blanding, old age, gentrification, Japanese water ghosts, what have you.) “But of course things change. No, girl, it’s not gonna look like the ’70s. Because those were the ’70s.”

“It’s kind of funny, our biggest task this year is assuring everyone that it’s perfectly legal to be naked at Up Your Alley and Folsom Street Fair,” Demetri continued, referring to the street fair exemption from the city’s recently passed nudity ban. “We’ll have an expanded clothes check, and we encourage everyone to get naked. Everywhere we go, people from around the world are, like, ‘You can’t even be naked in San Francisco anymore?’ Well, at least at our party you can.”

The biggest surprise expansion of the leather community, however, has been one of taste. Under Demetri’s eight-year leadership, Folsom’s gone beyond being the biggest fetish fair in the world to becoming a major West Coast tour stop for indie electro bands. For those of us who still associate leather parties with the tinny diva carnival racket that is gay circuit music, this is an incredible relief. Folsom Street Fair lineups, including acts like The Presets, Little Boots, and Ladyhawke, have been geared toward attracting a more adventurous concert-going demographic. And it’s worked.

“We’re now competing with Treasure Island Music Festival for acts for Folsom,” Demetri said. “We want to grow into more than the circuit-y vibe, and it’s gotten to the point where the thought of playing for 400,000 fetish fans sounds great to a lot of up-and-coming acts.” (Demetri couldn’t share this year’s Folsom co-headliners yet, but could spill that Light Asylum, Icky Blossoms, Heloise and the Savoir Faire, and Mark Moore from legendary UK pop-house outfit S’Express would be there. And Up Your Alley will feature mysterious outfit Luther’s deep techno and David Harness’s soulful house.) “It’s an adjustment for some of our crowd, but most people have welcomed it. Why have the same thing all the time? I love mixing it up, and hear these amazing stories about vanilla straight couples who came for the music bonding with queer piss fetishists and BDSM folks over the whole experience. It’s really one of those only in San Francisco things.”

“It’s already shaping up to be a crazy party,” Demetri said. “Who knows what’s going to happen? Maybe wear something stain resistant.”

PS I have to get in an extra special sloppy kiss here for my own Leather Dad, Ray Tilton, the sweetest ever, on his 50th birthday. Love you, Daddy Ray!