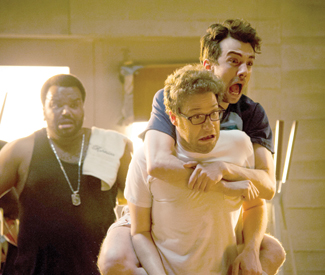 FILM It’s a typical day in Los Angeles for Seth Rogen as This Is the End begins. Playing a version of himself, the comedian picks up longtime pal and frequent co-star Jay Baruchel at the airport. Since Jay hates LA, Seth welcomes him with weed and candy, but all good vibes fizzle when Rogen suggests hitting up a party at James Franco’s new mansion. Wait, ugh, Franco? And Jonah Hill will be there? Nooo!

Jay ain’t happy, but the revelry — chockablock with every Judd Apatow-blessed star in Hollywood, plus a few random inclusions (Rihanna?) — is great fun for the audience. And likewise for the actors: world, meet Michael Cera, naughty coke fiend.

But stranger things are afoot in This Is the End. First, there’s a giant earthquake and a strange blue light that sucks passers-by into the sky. Then a fiery pit yawns in front of Casa Franco, gobbling up just about everyone in the cast who isn’t on the poster. Dudes! Is this the worst party ever — or the apocalypse?

I chatted with Rogen, his co-director and co-writer Evan Goldberg, and co-star Craig Robinson (The Office) when they hit town a few weeks back; their Bay Area visit included stops at multiple social-media HQs (Rogen’s take: “I thought there’d be more Segways.”) Rogen and Goldberg’s often-overlapping, guffaw-laden answers speak to their lifelong friendship — at 13, the Vancouver classmates wrote the first version of what would become the 2007 hit Superbad.

Also in 2007, they made Jay and Seth vs. The Apocalypse, a short film starring Rogen and Baruchel as “two guys arguing in a room, basically,” Rogen says. “The world is ending, but our main problem is that we have to deal with each other, and our histories, and our friendship issues.” The idea expanded and became This Is the End, which marks Rogen and Goldberg’s feature directorial debut. An apocalypse comedy? Well, why not?

“There’s always been apocalyptic movies. It’s the biggest idea you can have: the end of everything. But are there any other funny ones?” Goldberg wonders. “I found moments of Volcano (1997) pretty funny. I suppose Armageddon (1998) would be classified as an apocalypse comedy, by accident.”

It’s important to note that This Is the End relies not on natural disasters, asteroids, aliens, or zombies to signal doomsday. “The whole concept was, full Christian apocalypse,” Rogen says.

“Catholic. Christian. Apocalypse. Book of Revelations. It’s the biggest book ever made,” Goldberg adds. “It’s the most popular version of it, so we might as well ride that gravy train.”

Cult-movie connoisseurs will be familiar with unintentionally hilarious depictions of the Rapture, most famously in “scare films” like 1972’s A Thief in the Night. Rogen’s research was slightly more modern. “Along with two of our producers, I watched all of Kirk Cameron’s Left Behind movies,” he admits. “They are fucking insane. It was one of those things where we were like, “Let’s look at it for five minutes. It’ll be funny!” and we ended up watching the whole trilogy. It was unbelievable.”

Neither Rogen nor Goldberg happens to be Christian, which is part of the joke. “A lot of people think we’re gonna be stuck here as hell comes to earth ’cause we’re Jewish,” Goldberg points out.

“It’s true!” Rogen laughs. “That idea fascinated us. Most people in North America were raised Christian; whether or not they actually believe in it, they’re ingrained from a very young age with the general idea that hell is gonna come to earth one day, and the good people will get sucked up to heaven and the bad people will be laid to waste, basically. Which to us was a fuckin’ disturbing concept, especially since it was implied that we would be the ones left behind. I think that’s really where [the film] came from.”

Goldberg elaborates. “In 11th grade, I had a conversation with a Christian friend, where I asked, ‘Let’s say I save a bus full of children who are falling off a bridge. But there’s this serial killer who believes in the stuff that gets you into heaven, and I don’t. Does he still go to heaven, and I go to hell?’ And she was like, ‘Yeah. Sorry, dude.’ Most Christians don’t really think we’re going to hell. But they all know the story.”

“You’ve seen people play themselves in a movie before, but not to this level,” Robinson notes. “Though there’s two versions, you know — there’s me, singing ‘Take Your Panties Off,’ which I do in real life, and the me who has killed a man, which is not real. Hopefully the audience will able to differentiate.”

With a large ensemble of funny guys (Rogen, Robinson, Baruchel, Franco, Hill, and Danny McBride), plus a raft of cameos, the filmmakers were careful to split the laughs as evenly as possible.

“For the six main guys, we tried to write the best script we possibly could. But sometimes, the actors won [with their improv], because they’re funnier,” Goldberg laughs. “When it came to the party with all the different deaths and stuff, we had a bunch of ideas and we kind of hashed it out with each actor. We tried to make sure we gave everyone one good bit, and I think we mostly pulled it off.”

THIS IS THE END opens Wed/12 in Bay Area theaters.