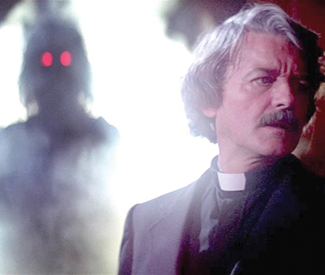 FILM In the 1970s conspiracy-theory culture flourished as never before, an unsurprising development considering the disillusioned malaise that set in after the turbulence of the 1960s and Watergate. In addition to innumerable theories about the “truth” behind JFK’s death (and later Elvis’), there was suddenly a widespread fascination with such questionable phenomena as the Bermuda Triangle, UFOs, Bigfoot, extra-sensory perception, the “Amityville Horror,” and so forth. Naturally this interest rapidly spread from cheap paperbacks to television and drive-in screens.

Such obsessions occasionally sparked upscale treatment (i.e. 1977’s Close Encounters of the Third Kind), but were more often exploited by filmmakers working on the trashier side of the audiovisual entertainment spectrum. Ergo the surfeit of cinematic dumpster-diving that comprises the Vortex’s June series “The Vortex Phenomena,” whose four Thursday evenings are dedicated to exploring the unknown in movies that themselves are largely pretty dang unknown.

There are at least a couple exceptions — and interestingly they’re the ones least relevant to the theme, being traditional supernatural horror. Most prominent is John Carpenter’s 1980 The Fog, his entry into the relative big time after indie Halloween basically invented slasherdom two years prior. Depicting murderous mariner ghosts who attack a coastal town on its centennial, The Fog is an atmospheric classic of sorts that almost became a career-ending bomb. Assembling a rough cut, Carpenter thought the results so flat he did extensive reshoots that ultimately constituted about a third of the final, successful version. The film still has a structural problem, though: we know early on that the ghoulies want to claim six lives, and since right off the bat they take three, there’s no huge sense of peril for the cluttered cast (including Jamie Lee Curtis, her Psycho-shower-victim mom Janet Leigh, bodacious Adrienne Barbeau, and Hal Holbrook). Trivia note: it was partly shot in Point Reyes and Bolinas.

The other moderately well-known film in the Vortex series is The Dunwich Horror, a striking 1970 H.P. Lovecraft adaptation with erstwhile Gidget and all-around perky girl Sandra Dee as a graduate student unknowingly recruited for demonic sacrifice by a superbly creepy Dean Stockwell. Otherwise, “Phenomenon” features movies even the fairly learned horror fan has probably never heard of — though if you were of viewing age in the 1970s you might have actually seen (and forgotten) a couple of them on network TV.

A pilot for an unproduced series, 1973’s Baffled! features Leonard Nimoy in an unusually debonair role as a racecar driver who begins experiencing psychic visions of future mayhem (sometimes, inconveniently, when he’s behind the wheel). They draw him to England, where a visiting movie star (Vera Miles, another veteran of 1960’s Psycho) finds her 12-year-old daughter going through an uber-bratty phase possibly heightened by demonic possession. The slick mix of comedy-mystery and horror doesn’t quite work, but Star Trek aficionados will enjoy the inexplicable wrongness of seeing Nimoy as a conventional suave action hero, saying things like “You’re a great-lookin’ chick!”

A stand-alone, more typical TV “Movie of the Week” of the same era was 1975’s Satan’s Triangle, which offered “one explanation” for the ongoing mystery of disappearances in the Bermuda Triangle. Forgotten bo-hunk Doug McClure is part of a Coast Guard rescue team answering a distress signal from a wrecked yacht on which are found various corpses — and one traumatized survivor, Kim Novak (yet another Hitchcock veteran). What happened? A hint: Name-check the title. And expect a very Christian ending. It’s like a fairly clever attenuated Twilight Zone or Night Gallery episode. Those series’ actual mastermind, Rod Serling, narrates the 1973 omnibus horror feature Encounter with the Unknown — something of a ruse, since he neither wrote or produced this amateurish trilogy of dull, dismal horror stories. Also on the yakkety side is 1978 Italian lukewarm mess Eyes Behind the Stars, in which space invaders wearing sparkly hoodies and leotards with motorcycle-helmet-type face visors wreak convoluted havoc on any human who gets wise to their murky global conspiracy.

There’s likewise too much talk and not enough terror in 1979’s The Kirlian Witness, a murder mystery about a dead florist (and telepathic plants) that’s just odd enough to hold interest. The “secret life of plants” was big that year — then-massively popular Stevie Wonder released an album of that same name, one that was soundtrack to a documentary about floral phenomena that played theaters but seems to have been completely removed from the public sphere since.

The hairy mother of all speculative subject matters arrives in the form of Yeti: The Giant of the 20th Century, a 1977 wonder that manages to combine two of the decade’s most disreputable subgenres, the Bigfoot cash-in and the King Kong knockoff. Dino De Laurentiis’ massively publicized, critically mauled 1976 Kong remake inspired a lot of cheap imitations, none sillier than this Italian production which basically copies the entire second half of that revamp, albeit with a muscled bear in a fright wig giganticized via primitive process shots, terrorizing Toronto. He’s like a 100-foot tall, glacier-thawed, million-year-old Wolfman Jack.

The yeti does not appear to have genitals, but gets very excited when the heroine of this otherwise family-targeted entertainment inadvertently rubs one giant nipple. (That is the kind of attention to detail one appreciates in “Un Film di Frank Kramer,” a.k.a. Gianfranco Parolini, a vetern of spaghetti westerns and Hercules movies.) It’s no Shriek of the Mutilated (1974) as yeti movies go, but it does have disco music, super loud wide-lapel men’s sports coats, a heroic Lassie-type dog, and magical leaps of narrative continuity. *