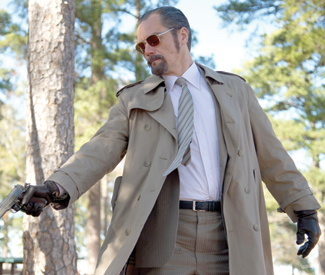 FILM Starting in the late 1960s, it was noted that Hollywood no longer necessarily required actors who were conventionally handsome. Dustin Hoffman, George Segal, and others were hailed as representatives of a brave new system in which the idiosyncratic character actor of another generation could now be the star. This was an oversimplification, given that the movies had already made room for the likes of Lon Chaney, Humphrey Bogart, and Bette Davis, among others who wouldn’t be considered conventionally beautiful. Nonetheless, the cult of beauty remains a huge factor in movie stardom — even more so now that we live in an era where the principal cinematic heroes are primarily superheroes of one sort or another, defined by their physical perfection.

Nevertheless, sometimes sheer, striking talent forces someone into the front ranks without their having the benefit of looking like a former model. A case in point is Michael Shannon, who has simply been too intense to ignore in movies since at least 2006’s Bug — through indelible performances in Revolutionary Road (2008), Take Shelter (2011), TV’s Boardwalk Empire, last month’s Mud, and more. He’s such a Method-y changeling that it’s hard to believe he’s six-foot-four — he’s so often, so effectively shrunken himself to play flawed men whose souls are in danger of being shrunken further by irresponsible actions.

He’s pretty much the whole show in The Iceman, about a real-life hitman who purportedly killed over 100 people during his career. Despite some scarily violent moments, however, Ariel Vromen’s film doesn’t show much of that body count — he’s more interested in the double life Richard Kuklinski (Shannon) leads as a cold-blooded killer whose profession remains entirely unknown for years to his wife, daughters, and friends. The waitress he marries, Deborah (Winona Ryder), isn’t exactly a brainiac. But surely there’s some willful denial in the way she accepts his every excuse and fake profession, starting with “dubbing Disney movies” when he actually dupes prints of pornos.

It’s in that capacity that he first meets Roy Demeo (Ray Liotta), a volatile Newark mobster impressed by Kuklinski’s blasé demeanor at gunpoint. He correctly surmises this guy would make a fine contract killer, and his offer does seem to strike a chord. Telling Deborah he’s now an investment banker, or some such, Kuklinski upgrades their lifestyle to suburban comfort on a mafia salary. When he has a falling out with Demeo, he “freelances” his skill to collaborate with fellow hitman Mr. Freezy (Chris Evans), so named because he drives an ice-cream truck — and puts his victims on ice for easier disposal.

For the sake of a basic contrast defined by its ad line — “Loving husband. Devoted father. Ruthless killer.” — The Iceman simplifies Kuklinski’s saga, making him less of a monster. His wife said he frequently beat her, though here the marriage is portrayed as fairly idyllic. You can see why Ryder’s Deborah might choose to overlook so many gaps in her husband’s alibis — Shannon makes Richard someone whose stern dedication to murder can also be applied to the roles of spouse and father. Woe betide anyone who insults his family, as one pool hall loudmouth finds out early on.

The movie only briefly suggests Kuklinski’s abused childhood, and it omits entirely other intriguing aspects of the real-life story. But Shannon creates a convincing whole character whose contradictions don’t seem so to him — or to us. It’s an unflashy performance, everything reined in, very tightly wound, such that you’d never imagine this actor could be loose or funny — though that’s exactly what he is in Mud. Shannon isn’t yet 40, and while there are plenty of actors whose bags of tricks leave little room for surprise, one suspects this guy couldn’t repeat himself if he tried.