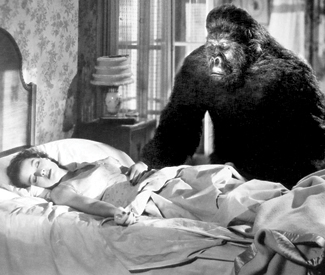 FILM While frequently spiced by dames alluring and sometimes deadly, film noir has always been intrinsically a manly-man’s world. Elliot Lavine’s latest Roxie noir retrospective, offering 30 features over two weeks, seems particularly heavy on vintage male charisma. Whether showcasing the seldom-noted comic chops of Humphrey Bogart, the seldom-appreciated star swagger of Victor Mature, or Cliff Robertson having an unusually credible (for the era) mental breakdown, the range of familiar and ultra-rare titles in “I Wake Up Dreaming 2013” offers a compendium of variably tough guys in tougher situations.

If you’re wondering where the series’ title comes from, the answer kicks things off: 1941’s I Wake Up Screaming is a most enjoyable murder mystery in which Manhattan sports promoter and all-around hustler Frankie Christopher (Mature) decides on a whim to play Pygmalion and make a pretty but coarse waitress (Carole Landis) his Galatea. Once she’s successfully launched as a “glamour girl,” however, she proves quite the little ingrate — “Why should I go on slinging hash when I can sling other things?” she leers, preparing to bolt for Hollywood. There’s no lack of suspects (including reliable sleazeballs Elisha Cook, Jr. and Laird Cregar) once she’s found knocked off.

The publicity at the time focused on 20th Century Fox’s big wartime pin-up and musical star Betty Grable making her dramatic debut as Landis’ “sourpuss sister” (meaning she’s a nice girl who disapproves of her trampy sib). But the movie belongs to Mature, a big strapping lunk who became a punch line about looks-but-no-brains Hollywood he-men. (Later career highlights include playing opposite Hedy Lamarr in Cecil B. DeMille’s vapid 1949 megahit Samson and Delilah, then getting mocked two decades later in the Monkees’ 1968 Head.) But he’s charming, confident, and surprisingly nuanced here. Oddly, Screaming‘s orchestral score heavily features unaccredited lifts from “Over the Rainbow” — a standard now, but then just a song from a two-year-old movie that everybody had already forgotten.

Similarly playing a semi-respectable Big Apple man-about-town, Bogart gives a master course in magnetizing viewer attention while seeming to do very little in the next year’s All Through the Night. “Gloves” Donahue is a gambler — surrounded by memorable flunkies including Jackie Gleason, Phil Silvers, and William Demerest — reluctantly sucked by his busybody mom (Jane Darwell from 1940’s The Grapes of Wrath) into investigating the death of her beloved local immigrant baker-neighbor. This being 1942, the path leads directly to Nazis — Peter Lorre, Conrad Veidt, and Judith “Mrs. Danvers” Anderson chief among them. Packed with priceless snappy patter, this comedy action hybrid may lack the “classic” cache of the star’s other ’40s vehicles. But it’s enormous fun, even if it goes off the rails a bit toward the end.

Another revelation in the program is Screaming‘s co-feature Blues in the Night, a strikingly ambitious sort of jazz musical melodrama written by Robert Rossen (director and co-writer of 1961’s The Hustler) and directed by another intriguing, now-neglected talent, Anatole Litvak. Following the very rocky road traveled by a combo of white musicians seriously dedicated to “real low-down New Orleans blues,” this starless effort is one of those rare B movies that packs an incredible amount of incident and depth into a relatively short runtime without ever feeling cluttered.

Some of “Screaming”‘s bills are themed by director or performer. May 19 brings a double dose of 1950s Joan Crawford, with her eerie resemblance at the time to Mrs. Potatohead. Female on the Beach (1955) is a fun thriller in which she’s a widow seduced and possibly menaced by Jeff Chandler, one of the era’s several leading blond pin-up boys. But Robert Aldrich’s 1956 Autumn Leaves is something else: a May-December romance that turns into a serious treatment of mental illness, as much-younger suitor Robertson turns out to be unstable in ways less conventionally scary than credibly pathetic. Unusually vulnerable — her nervously babbling curtain speech might be the finest acting she ever did — Crawford knew this was one of her best movies, and later paid due credit to Robertson’s “stupendous” performance.

Another evening pays tribute to the fascinatingly odd oeuvre of longtime industry fringe-dweller Arch Obeler, who famously made the first 3D feature (1952’s Bwana Devil), but is found in more intriguing form here with two earlier black and white cheapies. Bewitched (1945) is an offbeat thriller from the POV of a pretty schizophrenic (Phyllis Thaxter), though that term is never used. Its primitive psychoanalysis is bettered by the post-apocalyptic psychodrama of 1951’s Five, whose titular quartet — including a pregnant woman, a kind African American war veteran, and a fascistic white supremacist — mysteriously survive nuclear disaster but may not survive each other’s personalities. Politically progressive if sometimes dramaturgically simple, it’s a fascinating obscurity.

Other highlights include quintessential cult object The Monster and The Girl (1941), in which a giant gorilla takes out various corrupt underworld types whilst “Skipper the Terrier” follows its trail; ultra-low-budget 1957 Mickey Spillane adaptation My Gun is Quick, with Robert Bray as a marginally less cretinous Mike Hammer than usual; the very cool 1961 British drama All Night Long, which transposes Othello into a jazzbo context (complete with Brubeck and Mingus); and last but possibly least, a double bill devoted to short-lived blonde bombshell Beverly Michaels. A hammer-voiced minor challenge to Monroe, Mansfield, and Van Doren, she was invariably cast as destructive man bait. But like Victor Mature, her performances in Pickup (1951) and Wicked Woman (1953) suggest a more alert, modern intelligence than she was given credit for.