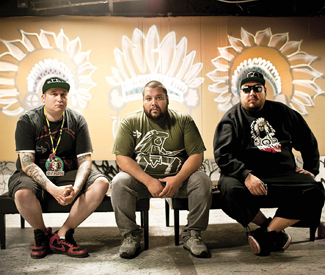 SUPER EGO “I’ve been listening a lot to Hulk Hogan’s new comedy album. I hear he has an acid jazz album coming out soon, too — can’t wait for that.” I’m being treated to some good ol’ deadpan Native American leg-pulling from DJ Bear Witness of A Tribe Called Red, performing at Thee Parkside on Fri/19.

Well, more accurately it’s First Nations leg-pulling, as the fascinating and super-fun ATCR DJs — Bear Witness, NDN, and Shub — are of indigenous Canadian descent, calling me from Ottawa, where their monthly party Electric Pow Wow has been slaying for almost five years now. The trio mixes electronic dance beats with contemporary aboriginal tribal drumming and singing, plus a healthy dose of aural and visual sampling both historical (early field recordings of powwow chants and 20th-century sound bites) and ironic (cringe-worthy Hollywood redskin whoops and awkward pop culture quotes ranging from John Wayne to Back to the Future III) to create a deliciously subversive club experience.

The result is what the three call “pow wow step” — a banging, trancey sound mostly rooted in the bass-heavy drops and meticulously constructed plateaus of dubstep, but transcending that too-trendy sound by virtue of the trio’s innumerable global dance music influences. And it’s finally giving a contemporary electronic voice to aboriginal groups from Ojibwe to Nippising.

Bear Witness points out that in Canada and much of the United States, indigenous people are now “urban aboriginals — we’re the people in the hoodies and baseball caps living downtown,” so a distinct, urban musical expression could only come naturally.

“We’re one of the fastest growing demographics, yet we’re still pretty invisible,” NDN added. “It’s a lot different from when our great-great grandparents came off the reservations looking for work. Our grandparents became integrated as much as they were allowed in 1950s and ’60s culture until some of them joined radical movements like Black Power. Then our parents grew up in this kind of unique urban environment full of little telltale signs that they were aborigines.

“And now we come along, raised on tribal identification, but also hip-hop and everything else you got growing up in the city. Including the fact that the whole world’s structured to be against you, from the moment you step out of the house in the morning to get a cup of coffee.

“So we’re representing, while also trying to move it all forward. We want to decolonize some of the references and stereotypes while having a lot of fun with it.”

For all the political subtext and critical theory red meat, ATCR’s emphasis is always on the party. “We’re three energetic DJs up there playing off each other in a totally spontaneous fashion, having a blast with the crowd,” says DJ Shub. Shub’s status as an insanely talented, vinyl-shredding winner of the Canadian DMC DJ championship makes him a star on his own.

When tripled with NDN and Bear, the quick-witted referents from Nusrat Fateh Ali Khan to Q-Tip fly — the group credits mashup culture, a breakdancing revival, and kooky Brit electro duo Radioclit among its inspirations. (And yes, when it comes to the sometimes awkward, culturally-appropriative legacy of tribal house, jungle, and New Age ambient, they love to flip it all back on itself, reclaiming it.)

A Tribe Called Red often draws hundreds to its touring powwow parties in the Great White North and the East Coast, sometimes featuring live drum circles and hoop dancers. Last year’s electrifying self-titled free-download album snagged them a pretigious Polaris prize nomination. The trio works with several organizations to promote aboriginal causes. New album Nation II Nation drops May 7, a cheeky collab with Das Racist, “Indian From All Directions,” just debuted on Pitchfork. And they’ve been buzzing for years. (I first became aware of them after a trip to Navajo Nation, when the morning radio pumped the spacey electro-tribal sounds of what my traveling companion instantly dubbed “tech-navajo.”) But this will be their first full-on West Coast tour.

No qualms about reception in unfamiliar territory, though: “There are aboriginal people everywhere, just like there are party people everywhere,” DJ Shub says. “Word gets out, and people will come for a good time.”

There’s some kind of size queen joke about this seminal bathhouse disco party finally reaching the big nine, but damned if I know what it is. Let bearded clan king DJ Bus Station John lay it all out for you, as his intimate weekly Tenderloin bacchanal keeps alive the down and dirty spirit of gay San Francisco. Free mustache rides!

Has it really been 10 years since club Mezzanine first mezzed up downtown? Celebrate in wild style with beloved big-room Brit electro duo SMD and a couple thousand others.

One of the best deep and Latin house DJs of all time, fiddling knobs on one of the best sound systems in the country. That is all.

Great, dark and dubby techno from a contemporary master will lay waste to one of the city’s most colorful dance floors at Honey Soundsystem. Who will survive? Anyone willing to plumb the secret depths of sound. And do some high kicks.