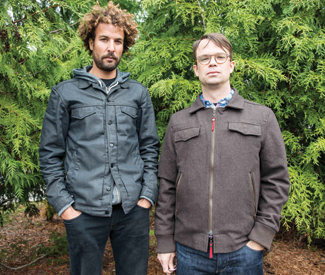 TOFU AND WHISKEY “I felt like, if I don’t put these songs out, they’re just going to fade away,” Phil Manley says from the enclosed playground in the Panhandle. He’s doing double-duty as an artist on an interview and a father watching his 15-month-old daughter in the park. And he’s prepping for a show at the Knockout later in the night.

It’s a juggling act the musician-producer knows well. He was a founding member of influential DC post-rock trio Trans Am, and has played with the Fucking Champs and Oneida. He’s produced albums for Wooden Shjips, Grass Widow, Date Palms, and Golden Void. And most recently, he released a textured, guitar-heavy drone rock album called Alphawaves (April 16, Thrill Jockey) with his new band, Life Coach. The release show for which is Sat/20 (9:30pm, $8. Hemlock Tavern, 1131 Polk, SF. www.hemlocktavern.com).

Given the prolific output, he’s been described as the Bay Area’s very own Steve Albini.

Manley moved to the Bay about a decade ago on the advice of Tim Green from the Fucking Champs. “DC is a much smaller artists community,” he says. “It’s been great for me as a recording engineer, to be here in San Francisco.”

He’s been working out of Lucky Cat Recording in Potrero Hill since 2006, after a fortuitous meeting with Lucky Cat engineer Kurt Schlegel at Manley’s previous workplace, Bottom of the Hill. At Lucky Cat, Manley’s more recent recording sessions have yielded albums by the Fresh and Onlys — “all I remember is this intense burst of creative energy” — and Barn Owl, whose new album, V, also dropped last Tuesday on Thrill Jockey.

Alphawaves is the first official Life Coach record, but confusingly, in ’11, Manley released a solo album, also called Life Coach. Got it? That was a collection of songs with vintage synths, Moogs, and drum machines, allowing a krautrock influence that remains a part of the Life Coach equation, even now with standard live drums. Manley pulled together a set for that solo project, ended up writing new songs for it anyway, and then turned those into Life Coach, the band.

He recorded with a drum machine as a place holder then sent the new tracks to “four or five drummer friends,” including Kid Millions from Oneida and Spiritualized, and LA’s Jon Theodore, who was in Mars Volta and is now drumming for Queens of the Stone Age. Theodore was the first to respond; he spent two weeks rapidly pounding out and recording tracks while living in Flea’s guest house in Malibu. “He banged it out so fast. He got the gig,” Manley chuckles.

The nexus point of inspiration for Theodore and Manley can be found in Tony Williams, a late jazz-rock fusion drummer who played with Miles Davis. “If you listen to his band, the Tony Williams Lifetime, you can hear the similarities,” Manley says. “But I should qualify that by saying that there’s no way we could ever touch that shit, because it’s so amazing. But we’re both fans.”

“Also, and I’m going to say this knowing that I probably shouldn’t say this. When we’re on tour, we basically only listen to the Grateful Dead,” Manley adds. “I think there’s a taboo [about that], especially among indie musicians, but who cares?”

Together, Theodore and Manley have toured with Psychic Paramount and Moon Duo, though Theodore’s schedule is a bit insane currently, given his involvement with QOTSA. But he’ll be there for the Life Coach album release show this weekend. Isaiah Mitchell of Earthless and Golden Void — who plays on some Alphawaves tracks — also might be in the live mix.

Mitchell played the backward guitar solo on opening track “Sunrise” and reprises that solo during title track, “Alphawaves.” He also guests on the awesomely noisy “Fireball.”

“[Mitchell] rips that crazy solo,” Manley says, excitedly recalling the recording of “Fireball,” — “[Mitchell] was like, oh my god, my hands are on fire!”

While Theodore did record most of his drums down in Malibu, some of the tracks were rerecorded live with Manley. “The tracks developed as we were playing live,” Manley explains. “But everything was a time crunch, so while we were on tour, we just snuck it in and finished it. I like working that way anyway — less time to fuss and you just bang it out. I feel like records sound better when you do them quickly, [they sound] less labored.”

In the first section of his farcical (if dead-on) popular music/how-to/occult book on forming a buzz band, Supernatural Strategies for Making a Rock ‘n’ Roll Group, legendarily hip frontperson Ian Svenonius (of Nation of Ulysses, the Make-Up, Weird War, Chain and the Gang) holds seances with dead rock stars to glean important information for the reader. The book continues with more pragmatic chapters like “communicating with those outside of the group” and “manufacturing nostalgia,” along with the scathingly accurate chapter, “critics.”

Winks Svenonius in the intro, “with the information revealed in this book, you too will be empowered to create a rock’n’roll group, tour the world, and record (or otherwise construct) a body of work so as to create a myth which might define a generation, inspire a movement, or earn the other various earmarks of rock’n’roll success. You might even perform at the All Tomorrow’s Parties festival if you play your cards right.”

Word to the wise, show up for the reading early; City Lights gets packed at these events, and you don’t want to miss an up-close look at Svenonius’ lippy pout and oh-so-tight pants.

You may already know Anna Hillburg’s sonic touch, without knowing you know her. The Bay Area trumpet player has guested on Dodos and Fresh and Onlys records, and she’s one-third of power-pop girl group, Dreamdate. As she puts it, she’s hella local. Get to know her more intimately on her new self-titled solo album — released on vinyl, March 25 on California Clap.

Left to her own devices, the songwriter and multi-instrumentalist hops genre barriers and eras over the course of 13 tracks, mixing classic ’60s pop with girl group harmonies, cry-ing over you ballads and dreamy whispers to forlorn lovers, with hat tips to fuzzy ’70s folk, Joni Mitchell, and the like. The only constant is Hillburg’s pleasant and confident crooning. Also, can we talk about this album cover? Perfection. With Luke Sweeney, Garrett Pierce.

And they said it wouldn’t happen. Remember all the way back in ’10, when sloppy doo-wop masters King Khan (Arish Khan) and BBQ Show (Mark Sultan) imploded over a series of on-stage arguments on an ill-fated tour? The Canadian garage punk duo has since mended — not before going on separate solo victory laps as King Khan and the Shrines and Mark Sultan, respectively — and has been patching things up with fresh songs and a few short tours. This is Khan and Sultan’s first time back in SF together since the break.

In the words of the dudes themselves, “Now listen baby, I don’t want to fight/Beautiful darlin’, maybe tomorrow night/You told me ‘You know I love you so’/But did you know ‘You know, I love you so’/Yeah yeah!” With Sir Lord Von Raven, Wild Eyes SF.