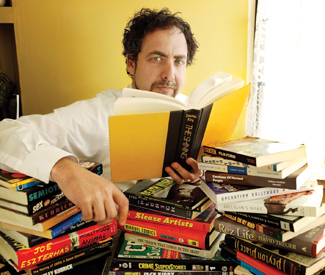 FILM Though he’s now living in Los Angeles, Rodney Ascher was a San Franciscan “for years and years,” he says, adding that he used to spend “a lot of time at Craig Baldwin’s Other Cinema.” He also has praise for the Roxie, the venue that’ll be hosting the local premiere of his Room 237 — a fascinating, kinda disturbing documentary that burrows deep down the rabbit hole with people who are obsessed with Stanley Kubrick’s 1980 horror masterpiece The Shining.

The Roxie screens that film Thu/18, and opens Ascher’s doc Fri/19; Ascher hints that he’ll journey to SF for the occasion. I spoke with him about Kubrick, Italian horror, and other mind-bending topics.

San Francisco Bay Guardian How did you find your five subjects?

Rodney Ascher Before I did the first interview, [producer] Tim Kirk and I spent maybe a year researching different theories about The Shining and people who were writing about it. Some people were fairly well-known to us, like Bill Blakemore, who has the Native American [theory]. His article was syndicated in newspapers in 1987, and has been reprinted all over the internet, so he was a person that we always wanted to talk to. Jay Weidner, who talks about subliminal techniques and allusions to the space program — his essay has circulated pretty widely online too.

So we started with them, and we would find other people as we went. The writer Jonathan Lethem, who’s had a lot of interesting things to say about The Shining, turned me on to John Fell Ryan, a guy in Brooklyn who’d been screening the movie backwards and forwards at the same time. Not only was that amazing in and of itself, but like a lot of this other stuff we were finding, it was amazing that it had only happened in the time since we’d started the project. A lot of [Room 237] is about the substance of what people are saying about The Shining — but it’s also very concerned with this phenomenon at the beginning of the 21st century, where an awful lot of people seem obsessed with this movie made in 1980, and isn’t that interesting, and why is that happening?

RA I mailed [each subject] a digital audio recorder, and I would talk to them via Skype from my studio. I’d have a list of questions based on what I knew about what they had written, but oftentimes the more open-ended questions would lead in more interesting directions: “What was the first time you saw The Shining?” or “When did you figure out this idea? How did it come to you?”

I read someplace that one of the best interview questions is just, “Why?” I don’t have much of a hard-core documentary background, so I haven’t interviewed tons of people, but I figured out pretty quickly that the less I said, the better.

SFBG What role do you think the internet has played in this growing obsession with The Shining?

RA I think it’s got everything to do with it. Things like YouTube videos and digital technology in general allow us to look at movies more carefully. We try to have a little bit of a subplot of people being able to watch the movie in theaters, and then on home video, on DVD, Blu-ray, YouTube. As [the opportunity to watch the film again] increases, the way we watch it changes.

But it’s also things like comment threads and blog postings, which allow people to share ideas with other folks in a way that was never possible before. Even if you could write a newspaper article or a magazine entry, there are very practical length considerations that you’d have to work with. But now, if you feel like writing a 125-page article about the manager of the Overlook Hotel, you can put it up on your blog, and there’s no limit to how much detail you can include.

SFBG Both your 2010 short The S From Hell and Room 237 are about hidden meanings and subtexts. What draws you to those themes?

RA The S From Hell started because I read about these people who had a childhood phobia of the old Screen Gems logo, and I had a flashback to myself at the age of three. Although my experience wasn’t quite as intense, I had a similar strong, confused reaction to that thing. And I’ve watched The Shining again and again, and have been obsessed with it, even if I haven’t come close to deciphering it. So it may be that — although I barely appear in these movies — there’s an autobiographical quality to this, that I’m recognizing aspects of myself in what these folks are doing. But maybe it’s not best for me to try to analyze Room 237 too deeply!

SFBG The Shining isn’t the only film used to illustrate Room 237. How did you decide what else to use? I spotted clips from Lamberto Bava’s Demons (1985), for example.

In a big-picture sense, I think we’re talking about the ways movies get into our heads. Bill Blakemore, one of our interviewees, has a great phrase where he compares The Shining to a dream, and Stanley Kubrick’s process of filmmaking to dreaming — that you condense everything that’s happened in your life up to that point, and then it comes out in dreams, in some kind of strange new version.

Demons is a movie about the line between what’s happening on the screen, and what’s happening in the audience, getting very blurry. So for people who are familiar with Demons, the connection might play very clearly; but for people who aren’t, they’re still seeing a really stylishly shot scene of people in a theater in the early ’80s who are struggling to understand this very baffling movie they’ve been presented with.

SFBG Room 237‘s sound design is very distinctive. Can you talk about how that came together?

RA The sound design is by Ian Herzon, an amazing guy who was able to create this heavy, atmospheric mix. It was important to me that Room 237 played more as an immersive experience than as a dry piece of journalism. In a weird way I wanted it to be kind of a horror movie in itself. And Ian has worked on some of the Resident Evil movies, so that was a style that he was comfortable with.

The music is by William Hutson and Jonathan Snipes, who specialize in [horror themes]. Jonathan plays in a band called Nilbog, which performs, like, music from Dawn of the Dead (1978) and Suspiria (1977) live in concert. Their studio looks like a museum of analog synthesizers. So when I was discussing the music I wanted for the film, and I was talking about the early ’80s, Italian synthesizer scores, or John Carpenter music, or Tangerine Dream’s score for Sorcerer (1977), we spoke the same language very quickly. I love the way the synth scores have this trance-inducing, meditative effect. They sometimes have even quasi-religious aspects to them, which seemed kind of appropriate, since we’re looking at The Shining the way some people interpret the Bible.

SFBG What is your reaction when you hear people say, “After seeing Room 237, I’ll never watch The Shining the same way again?”

RA That’s great! And another thing that a lot of them say is, “I’m gonna go and immediately re-watch The Shining,” which is awesome. The Shining is a maze that certainly me and the people that we talked to can’t get out of — so there’s something satisfying about luring other people back into the middle of it.