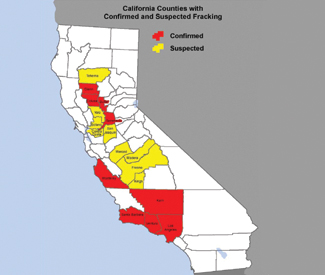 In December 2012, the federal Bureau of Land Management held an annual auction for oil and gas development rights on federal territory in California, offering up wild lands in Fresno, Monterey, and San Benito counties. It sold off leases to 15 parcels, totaling nearly 18,000 acres. One bidder was a subsidiary of Occidental Petroleum, an oil company that drilled 675 new wells in California in 2011 alone.

The BLM affair works like any other auction: Bids are made verbally, and leasing rights are awarded to the highest bidder. Every last acre was snapped up, locking companies in for 10-year leases.

The fact that oil companies can buy up mining rights to such a vast area of public land, for the price equivalent of about a tenth of a house in San Francisco, is nothing new. But this land auction was significant because BLM turned a blind eye to fracking, an oil and gas extraction technique that’s fueled widespread opposition. BLM green-lighted the leases based on an official assessment projecting that no more than a single acre of land would be disturbed by the anticipated oil drilling, the same argument used to justify the previous year’s auction.

Such a scenario may have been realistic in 2006, when the governmental agency drafted the document it relied on to make such a rosy prediction. But technological advancement has transformed the fossil-fuel sector over the past six years, and the oil industry is buzzing about vast untapped potential contained within the Monterey Shale, a leviathan geologic formation that extends across a major stretch of California, including beneath the federal lands in question.

“The Monterey area has become a focal point,” says Brendan Cummings, “because, but for fracking, these areas would never get tapped for oil.” An attorney with the Center for Biological Diversity, Cummings splits his work between offices in Joshua Tree and San Francisco. He led the Center in a lawsuit against BLM over its 2011 oil-and-gas lease auction, which affected 2,500 acres, arguing that the government should have realistically assessed the environmental threats posed by fracking before it started handing out drilling rights.

And it’s happening all over California, and growing at a rapid rate.

Sounding more like an approximate substitute to circumvent a television ban on profanity, “fracking” is short for hydraulic fracturing. It consists of pumping high-pressure fluids up to 15,000 feet underground and into “horizontal wells” that can fan outward for a mile or more, with the aim of smashing up the shale formations. While a form of fracking has been in use for decades to “rework” oil wells, the kind of high-pressure, high-temperature operations now being employed represent a departure from traditional methods.

The exact contents of the proprietary fracking fluids are mostly secret, but they’re known to contain high volumes of water, sand, and a patented blend of toxic chemicals, sometimes incorporating acid to make the rock brittle enough to fracture.

On April 8, a federal judge ruled that the Obama Administration had violated federal law in the 2011 BLM auction by failing to first conduct an environmental impact study on fracking. It’s too soon to say how this will affect the 18,000 acres auctioned off in December, but Cummings says he expects to be back in court before long.

Yet the ruling has no effect on the oil wells already dotting the landscape in places like Kern County, an area already marked by poor air quality that supports the highest concentration of fracking operations in California. And for every acre of federal land now tied up in court, there are thousands more private parcels susceptible to being radically altered by fracking.

The U.S. Energy Information Administration estimates that the Monterey shale formation, which extends from the northern San Joaquin Valley to Los Angeles County and westward to the coast, holds more than 15 billion barrels of oil.

It’s an astounding quantity that dwarfs that of the Bakken Formation, which has helped light up North Dakota’s economy with a fracking boom, or the Eagle Ford Shale in West Texas, each of which are estimated to contain between 3 and 4 billion barrels.

Once a company has obtained a permit to extract oil and gas, “the state doesn’t require companies to get a permit to frack,” explains Scow, so it’s unknown just how much it’s currently happening. Voluntarily reported industry data shows that at least 91 wells were fracked in California between January 2011 and April 2012. Yet in 2011 alone, state records show, 2,294 new wells were drilled, while 3,376 notices were filed to “rework” existing wells.

In California, oil and gas drilling is regulated by the Division of Oil and Gas Resources. Speaking at a forum at the Commonwealth Club hosted by Climate One on April 2, Mark Nechodom, director of the California Department of Conservation, said DOGR never required reporting on fracking because it’s “one short blip” in oil production.

“In our historical use of fracturing in California, we have had no evidence that there is any environmental damage or hazard to human health—no evidence, I am saying—and therefore we have not required reporting,” said Nechodom, whose agency presides over DOGR. “Now we are requiring reporting and we are in the middle of developing a regulation for that.”

Nevertheless, the prospect of a pending California fracking boom on top of the loosely regulated activity already underway has galvanized Bay Area environmentalists. A host of environmental organizations are planning to form a coalition in the next several weeks to push for a permanent ban on fracking, targeting Gov. Jerry Brown.

Unchecked fracking could unleash a host of problems, says Scow, including a high risk of tainted groundwater, harmful air emissions, a spike in atmospheric carbon from the release of underground methane, and possibly even more frequent earthquakes due to wastewater disposal deep below the earth’s surface, which can destabilize faults.

“The process is just too dangerous,” he says. “There’s no safe way to frack. In the long term, we want fracking banned.”

Policy discussions about fracking often arrive at the “Halliburton loophole.” In 2005, the story goes, when the federal Energy Bill was being drafted under the Bush Administration, then-Vice President Dick Cheney orchestrated the inclusion of a perplexing provision exempting “hydraulic fracturing” from the Safe Drinking Water Act.

Cheney famously presided over Halliburton, a company that invented a precursor to modern-day fracking in the 1940s. Few understood what it meant at the time, but the ascendance of fracking has made it clear that the loophole amounted to a munificent gift to the oil industry, clearing the way for rigs to bore downward and outward with toxic underground fluid injections unencumbered by regulatory slowdowns — all to the detriment of safe drinking water.

“The Safe Drinking Water Act loophole has really created a problem for us,” Steve Craig, an olive rancher from Monterey County, noted while speaking at the Commonwealth Club panel.

Craig described the frustrating process of trying to get agencies to intervene in a fracking operation nearby his ranch, right along the Salinas River. “At this point, we don’t know what’s in the fracking fluids. How can you know if it’s a problem if you don’t know the content of the chemistry? It’s not fair to the public to hide behind that trade secret veil and expect us to live with it.”

The risk of groundwater contamination tops Scow’s list of nightmarish scenarios. Fracking fluids can contain benzene and other carcinogens, as well as compounds linked with kidney or nervous system problems. “Once fracking fluid is injected underground, much of it stays underground indefinitely,” a Food and Water Watch issue briefing notes. “There is a network of different pathways through which contaminants … could flow into and contaminate groundwater.”

And since groundwater is drinking water in some places, Scow says this possibility is a major concern. “Prevention is really the key here,” he says. “We’re talking about some nasty stuff that could be irreversible.”

On April 29, the Assembly Resources Committee is scheduled to take up two nearly identical pieces of legislation that would impose indefinite moratoriums on fracking. The practice has already been subject to moratoriums in New York and New Jersey, and was permanently banned in Vermont and nationwide in France and Bulgaria.

But there’s likely to be stiff resistance, because for oil companies, fracking may as well be California’s modern-day gold mine.

“We’ve been a major petroleum state for a number of years, and the governor has indicated strongly that we want to continue to do that,” Dave Quast, head of an industry association called Energy in Depth, noted at the Climate One panel. “It’s been done safely, and it will continue to be done safely, and we should all be excited about that,” because it’s preferable to importing oil from the Middle East or places with weaker environmental regulations, Quast said.

But there’s a larger question: Do we really want to be burning more oil? If every last barrel of oil were extracted from the Monterey shale, says Scow, it could indeed meet the nation’s total oil needs — but based on current consumption rates, it would be entirely burned up in less than three years.

“Burning the 15 billion barrels of oil — even if that were some kind of achievement,” Scow says with a wry laugh, “is still going to make our climate crisis worse.”