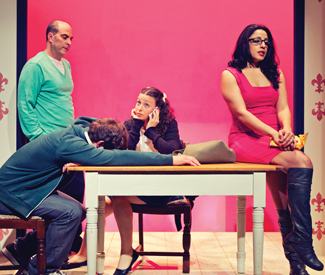 THEATER The screaming, childish fight that suddenly erupts between married professionals Carol (Michele Leavy) and Michael (Lawrence Radecker) comes on with such excess it’s like the release of a geyser. A moment later it just as quickly submerges, disappearing under a layer of domestic bliss, or anyway routine, as adjunct prof Michael and attorney Carol share some cocaine and a glass of hard liquor to celebrate her legal firm’s recent victory in court. They then go on to calmly discuss Carol’s suspicion that their teenage son, Teddy (Josh Schell), is masturbating at school — a theory based on laundry-room evidence pointing to yet another surplus of nervous tension.

Carol and Michael’s comical burst of hysteria is our first hint of the quicksand underneath the floorboards of this seemingly solid family home. Then again, maybe it’s the casual drug use; or the immodest concern with their son’s sex life; or those loose bricks stashed pell-mell beneath the foundation in scenic designer Maya Linke’s set, otherwise subdivided with Ikea-showroom purity into sleek, discrete living compartments.

Either way, it doesn’t take long before a full-blown crisis emerges: Carol finds herself in critical condition after emergency bypass surgery, and the family finds itself without life insurance in the face of the main breadwinner’s demise. It’s Carol who proposes a solution from her hospital bed: Michael will marry Carol’s best friend, Katy (Denmo Ibrahim), to maintain the household financially and emotionally. “This is totally fucked up,” balks Michael. “It is totally fucked up,” agrees Carol, “but that’s reality.”

You could say the same for the comedy at the core of Thomas Bradshaw’s The Bereaved, now enjoying a slick Bay Area premiere courtesy of Crowded Fire and artistic director Marissa Wolf. Even with all its excess, it boils down to a portrait of middle-class sobriety: just a family doing the best it can under the circumstances — it’s the circumstances, in other words, that are key to Bradshaw’s gleefully outrageous send-up of American mores.

In the heroic attempt to maintain its debt-fueled lifestyle, the revamped nuclear family soon launches its own illicit business enterprise — in which 15-years-olds Teddy and pregnant girlfriend Melissa (Olivia Rosaldo) both participate, with the help of their Harlem drug dealer, Jamal (Reggie D. White). Throughout, moral confusion is inextricably and messily bound up with economic disorder — and the specific calamity attending the protagonists with a more general crisis that runs deep and wide. If the play presents in the most casual terms a lightly shocking catalog of sexism, racism, and drug use — all of it played with deadpan precision by an enjoyable cast — it’s ultimately because the play is not about sex or drugs or racism per se, but rather about power and status in a world where the middle-class is being destroyed by forces larger than itself, even as its own moral and material contradictions work to destroy it from within. Moreover, The Bereaved suggests the disintegration of that middle-class may be a necessary extinction — and what a relief it is.

Crowded Fire’s production embraces the material with a ready energy and focus that was contagious with opening night’s packed house, though the comic tone struck here can sometimes overwhelm the play’s quieter, grittier, intentionally realistic dimensions. But this is hardly a reason to avoid seeing the production, especially since The Bereaved is the first of Bradshaw’s dozen or so plays to be produced in the Bay Area. Plainly staging hypocrisy, violence, and the flouted taboo in plays such as Dawn, Strom Thurman Is Not a Racist, or The Bereaved is central to Bradshaw’s satire, a bluntness that suspends moral judgment to look squarely at underlying complexities. Along the way, he’s been honing a distinct theatrical voice that has been widely enjoyed (or not) for years. Crowded Fire’s production is a welcome and long overdue arrival.