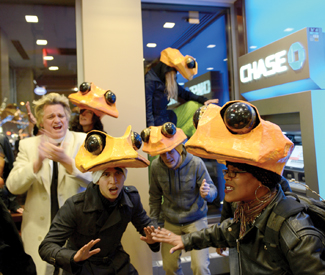 Reverend Billy Talen and his Church of Stop Shopping — which evolved from anti-consumerism street theater in San Francisco in the 1990s into a venerable New York City protest/performance institution — is bringing its creative environmentalist prayers and ploys back to the Bay Area next week.

Talen is a talented talker and writer whose most recent book, The End of the World, is a poetic plea for people to finally get serious about climate change, loss of biodiversity, and other environmental indicators that are passing irreversible global tipping points, all of them fed by the relentless growth of global capitalism.

“When Hurricane Sandy hit New York, there was no discussion of the underlying causes,” Talen told us. “There’s a disconnect. We have a 1,000-mile wide storm that seems to be aimed at Wall Street, and we’re not mentioning Wall Street.”

Billy and his crew are, using street theater to make their point. As he spoke, Talen said he was surrounded by two dozen costumes of the extinct Golden Toad that his crew has been donning to invade and engage in media-friendly civil disobedience at branches of Chase Bank, which the Rainforest Action Network concluded is the leading investor in carbon-emitting projects.

“Amphibians are going extinct around the world, and if I can mix my metaphors, that’s the canary in the coal mine,” Talen said, calling climate change a systemic result of an economic system predicated on consumption and growth. “Corporations are made to not be sustainable. They have to expand every quarter.”

Talen begins his visit on Monday, April 22, with a 7pm reading at Booksmith, 1644 Haight Street, and he wraps up on April 27 at 8pm with a full 17-member Church of Stop Shopping performance at Victoria Theater, 2961 16th St., SF. In between, they’ll be Lone Mountain College in SF on April 24, Pt. Reyes Dance Palace on April 25, the Chalkupy event at Oakland City Plaza on April 26, the Live Coast West taping on April 27 — and perhaps exorcising a Chase Bank or two along the way.