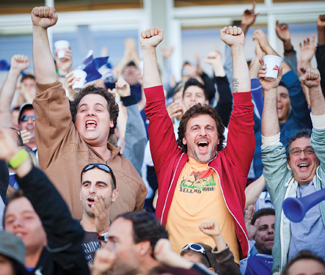 FILM No country exports mainstream films to the extensive success that the US does. To the frequent chagrin of local filmmakers and cultural watchdogs, Hollywood dominates many nations’ box offices, non-English-speaking ones included. Nor do we reciprocate much — there remains a wide separation between what are perceived as commercial entertainments and “art house” films, with foreign-language (or even just British) ones almost invariably limited to the latter category.

We’ve all rolled our eyes at otherwise sophisticated people moaning that they can’t be bothered with even the most accessible movie in another language because subtitles are too much trouble. As a result, ‘murricans seldom hazard big-screen exposure to anything but the most rarefied, prize-winning, serious, or conceptually novel features from other nations. While we feed them plenty of our mall flicks, their less-than-exceptional homegrown genre movies are considered to have little marketable value here. (Save as fodder for remakes, of course.)

So it’s a tiny bit unusual when one week brings openings of two movies unalike in every aspect save their being solid if unremarkable examples of mainstream hits abroad. French-Canadian comedy Starbuck and German crime thriller The Silence are both an uptick or two above “decent,” but they hardly sport the thematic-stylistic edginess or other qualities that usually win US distribution. They’re just kinda fun.

Maybe “fun” is a tasteless way to describe The Silence, which hinges on pederasty and child murder — though in the end this is more an intelligent pulp thriller than serious address of those issues, uneasily as it straddles both at times. In 1986 two men abduct an 11-year-old girl — one the initially excited, then horrified observer to the second’s murderous sexual assault. Twenty-three years later, another young girl disappears in the same place under disturbingly identical circumstances.

This event gradually pulls together a large cast of characters, many initial strangers — including the original victim’s mother (Katrin Sass) and the just-retired detective (Burghart Klaubner) who failed to solve that crime; parents (Karoline Eichhorn, Roeland Wiesnekker) of the newly disappeared teen, who experience full-on mental meltdown; a solidly bourgeoisie husband and father of two girls (Wotan Wilke Möhring), inordinately distressed by this repeat of history; and the erstwhile friend he hasn’t contacted in decades, an apartment-complex handyman with a secret life (Ulrich Thomsen).

Part procedural, part psychological thriller, part small-town-community portrait, director-scenarist (from Jan Costin Wagner’s novel) Baran bo Odar’s The Silence is just juicy and artful enough to get away with occasional stylistic hyperbole. Let alone having enough subplot intrigue and weirdo characterizations — Sebastian Blomberg’s spazzy grieving-widower police detective is a bit much, in the Anthony Perkins tradition — to float a miniseries. It’s a conflicted movie, albeit handled with such engrossing confidence that you might not notice the credibility gaps. At least until thinking it over later. Which, don’t.

There’s no complicated narrative brain-teasing in Starbuck, which has a great (if not entirely original) comedic concept it chooses to play seriocomedically — i.e., less for the laughs it seldom earns than for the heart-tugging it eventually pretty much does. An ingratiatingly rumpled Patrick Huard (a major Quebec star best known for the mega-hit Les Boys series and 2006’s Good Cop, Bad Cop) plays David, erstwhile stellar contributor to a Montreal sperm bank in his salad days. Now older but no wiser, he finds himself confronted by the reality of 533 biologically fathered, now-grown offspring who’ve filed a class action lawsuit to discover his identity even as he deals with mob debt and an exasperated, pregnant semi-ex-girlfriend (Julie LeBreton).

This is one of those “loser man-boy must semi-grow up fast amid crisis, finding family values en route” scenarios tailor-fit for Adam Sandler. That said, the overlong, stubbornly endearing Starbuck is so much less insufferable than anything Sandler has made since … um, ever? Halfway through, this agreeable movie gets clever — as David stumbles into a meeting of his prodigious anonymous progeny — and remains reasonably so to the satisfyingly hard-won happy ending.

It’s still got moments of contrivance, editorial fat (too many montages, for one thing), and more climactic hugs than any self-respecting dramedy needs to get the redemptive point across. Yet it’s also got something few comedies of any national origin have today: a lovely, distinctive, bright yet non-cartoonish wide screen look.