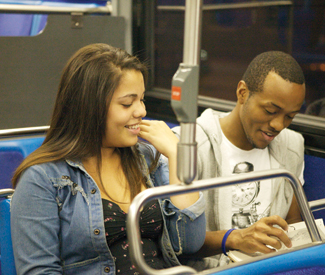 FILM Imagine being trapped, No Exit–style, on a city bus — let’s say Muni’s dreaded “Double Deuce” Fillmore for the sake of creative visualization — in the midst of a dozen or so out-of-control teenagers hell-bent on humiliating and terrorizing their peers and, if you have an obvious human frailty, you as well. Sound like fun? Well, Michel Gondry’s The We and the I puts you there (dramatically speaking, at least) and is often surprisingly just that. To paraphrase Sartre, “Hell is other people … on the bus,” but thankfully we get to take the trip from the safety of cushy theater seats and comfy couches.

Arguably minor Gondry (unlike 2011’s abominable The Green Hornet, whose failure can only be described as major), it’s a nice little palate cleanser in anticipation of his upcoming, much-publicized “return to form,” the Audrey Tautou–starring Mood Indigo, a film that looks to be as visually lush and romantic as The We and the I is stripped down.

Almost all of the film takes place on the aforementioned city bus as it crawls around the mean streets of New York City’s Bronx borough, ostensibly to take home kids (all played by nonprofessional actors, all minorities) after their last day of school. One or two of them do disembark early, but most seem stuck on a fossil-fueled existential journey of the damned. At about the 70-minute mark it’s hard not to wonder if the disgruntled bus driver isn’t just tooling around in circles past the same storefronts à la Joel Barish’s mind trips in Gondry’s Eternal Sunshine of the Spotless Mind (2004) — just exactly how big is the Bronx anyway? “Drop out, get your GED, join the army. I don’t give a fuck,” the driver tells a confused girl. It’s clear that the kids suffer from this kind of general adult apathy, but most bear it with a hard-edged bravado that belies their vulnerability.

That particularly applies to the trio of bullies at the back of the bus, who treat both the kids and the adults with equal-opportunity disdain. They smash an arty boy’s acoustic guitar, hurl insults while sneaking smokes, and even shame a middle-aged guy with a cleft palette. But most of their ire is saved for Teresa (Teresa Lynn), a slightly chubby, obviously troubled girl who shows up wearing a laughably bad blonde wig after being MIA from school for weeks. Teresa becomes the emotional heart of the story after it’s revealed her relationships with several kids on the bus are more complicated than initially thought.

Those kids include a drama-queen sexpot with apparent self-harming issues, a refreshingly upfront couple of gay teens, and a gaggle of giggling girls who toss around a water bra like a football. (The girls, tellingly, are just as aggressive as the boys.) Geek and bully alike connect regularly through the preferred teen method of communication: social media, specifically in the form of a YouTube video of a local doofus named Elijah repeatedly falling on his ass. Some joys are universal.

Visually, The We and the I marks a departure for Gondry. While his films always have a low-fi, arts-and-crafts vibe full of DIY quirk, this one generally eschews his love of handmade ephemera. (A major exception is the boom box rejiggered to resemble a tiny bus, which tools around to Young MC’s “Bust A Move” during the opening credits.) There is a touch of fast-motion and papier-mâché goofiness, but mostly the whole thing is done in a straightforward, verité style.

The tone, however, is pure Gondry: dopey-funny and sophisticatedly unsophisticated. You get the sense that, unlike his tony New York–loving counterparts Wes Anderson and Noah Baumbach, Gondry is a true populist. The We and the I is certainly nothing if not populist. But it’s also about the individual — specifically who we are inside and outside of an often-grueling social system. Despite some hiccups, like an unnecessarily dark third-act revelation, it’s more or less successful in illuminating the joys, cruelties, and uncertainties of life, which remain viscerally real after the sun sets and we finally get off the bus, vulnerable as ever in our solitude.

THE WE AND THE I opens Fri/22 in Bay Area theaters.