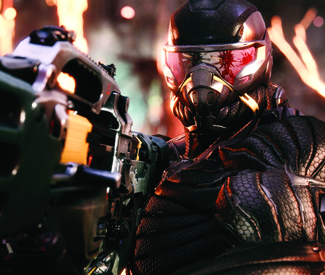 GAMER Crysis 3 (Crytek/Electronic Arts; PC, PS3, Xbox 360)is a very familiar experience, and not just for players versed in the story and mechanics of the Crysis series. If you’ve played a futuristic shooter in the past 10 years, you’ve seen everything Crysis 3 has to offer: a hodgepodge of sci-fi clichés, stealth combat, and big alien guns. It’s an exercise in déjà vu that leaves little in the way of a lasting impression, but it’s a really good-looking hodgepodge.

After its moderately successful 2011 home console debut, developer Crytek set out to expand upon Crysis 2 and — to hear the company tell it — it began with the story. Twenty-four years after the events of Crysis 2, Prophet, the last of the original Crysis super-soldiers, infiltrates a post-apocalypse New York City on the hunt for a big bad alien. Half rubble, half jungle, NYC survives within its own ecosystem, thanks to a giant overhead dome controlled by evil corporation CELL.

Prophet himself might as well be a walking cardboard box, but Crysis finally achieves an emotional core in his soldier companion, Psycho, who struggles to deal with the loss of his own super-powered nanosuit. Unfortunately, attempts to wrangle a complicated story into something subtle and meaningful means tossing aside Crysis‘ rich mythos in favor of highlighting character moments that frequently lack context.

So, scrap the drama, let’s talk about how Crysis 3 boasts some of the finest graphics of this generation — especially on PC. Skyboxes are mighty impressive and incidental animations such as swaying grass, smoke, and fire promote the apocalyptic atmosphere. On consoles, the game sets a similar benchmark but it’s one that often reveals how near we are to the end of the road for this hardware. Similar to seeing The Hobbit: An Unexpected Journey (2012) in high-frame rate, the studio’s ambition sometimes exposes flaws and behind-the-scenes trickery that players would otherwise ignore.

Juggling between Prophet’s nanosuit camouflage and his armor powers allows players to choose the kind of combat experience they want, and the ruins of New York allow the freedom to tackle objectives using any number of methods. It’s a nice turn on the traditional run-and-gun format to be given the freedom to move about the environment in any way you choose, but objectives ultimately boil down to moving from point A to point B anyway. If you like the mechanics but find the structure limiting, try multiplayer, where managing stealth and shield adds considerable depth to the traditional death-match game.

Crysis 3 pushes the visual boundaries of first-person shooter, but a $60 game can’t be propped up on graphics alone. If you’re into shooting your friends online, Crysis offers a solid alternative to self-serious war games. The rest of the adventure is too often a tech-demo sandbox with no compelling reason for you to explore it.