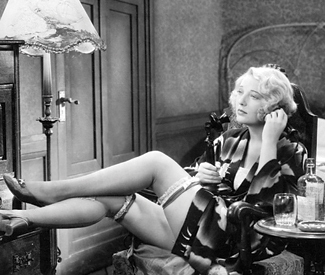 FILM The current hand-wringing over whether an irresponsible entertainment industry corrupts our youth is notable for being such a blatant diversionary tactic by gun-control foes — their argument being a little beside the point, of course, since incidents are rather few of people being shot dead by a copy of Grand Theft Auto or a Saw flick.

The case against Hollywood as corruptor of morality and youth is otherwise nothing new. On several occasions outrage has risen enough to actually force changes (however modest or temporary), such as when unprecedented late-1960s levels of violent and sexual content instigated the creation of the current MPAA ratings system, now considered wildly out-of date.

But the biggest such fracas reached its zenith with the 1934 enforcement of the Production Code, which levied drastic new limitations on screen content. It introduced a bland new era, and orphaned the one just past — the one we’ve come to celebrate as “pre-Code,” and which is back once again in Elliot Lavine’s latest Roxie series, the week-long “Hollywood Before the Code: Deeper, Darker, Nastier!”

Hollywood had already been building — rightly or wrongly — a rep as the “modern Sodom” for some time. High-profile scandals during the silent era involving drug abuse, wrongful death, and unsavory sexual revelations prompted many a pulpit denunciation. When sound arrived, old talent was replaced by new imports from “blue” Broadway, where racy patter was de rigueur; so once the movies learned to talk, they quickly learned to talk … well, unclean, if not exactly legally dirty.

The Depression had brought harsh new social realities, and while audiences craved escapism, they didn’t mind if it was also vicariously rude and raw. (At least urban ones did — rural patrons had more conservative tastes, and in an era well before “wide” simultaneous openings on umpteen screens, the studios provided selective product accordingly.)

Violence was indeed a major issue: The original “gangster” cycle kicked off by The Public Enemy (1931), Little Caesar (1931), and Scarface (1932) horrified many, with mayhem that barely registers by today’s standards censored on a state-by-state basis. But the main thing was allegedly pervasive and pernicious “smut,” as represented by everything from Betty Boop’s skirt length to the average prude’s Satanic Majesty Herself, Mae West. (The Code’s impact could be most directly measured in the speed with which a toned-down and thus nearly irrelevant West went from box-office titan to has been.)

In the brave new world of the Code, such threats to national sanity went away because sex no longer existed. Even married couples were to be depicted as having separate double beds, one spouse keeping always keeping a foot on the floor during any kisses (of less than three seconds in duration) in their vicinity.

But on the pre-Code screen, everybody was doing everybody, often for sweet cold cash — though of course the world’s oldest profession was never exactly named. This latest Roxie series features plenty of its practitioners, dames at once hard-boiled and over-easy but ready to go soft for an upstanding guy. The most famous is dubiously employed Marlene Dietrich in von Sternberg’s 1932 exotica masterpiece Shanghai Express, wherein she husks “It took more than one man to change my name to Shanghai Lily.” Then there’s Miriam Hopkins as Ivy the barmaid in Rouben Mamoulian’s classic Dr. Jekyll & Mr. Hyde (1931), with Frederic March in the lead role(s).

Most of the current program’s titles are variably obscure ones with glittering Golden Age stars in scenarios that further tarnish legally challenged ladies before romance buffs them shiny again — most in “four hanky” soap operas targeted toward a working-class female audience later represented by Mia Farrow in The Purple Rose of Cairo (1985). Paramount’s glossy 1933 Torch Song has the next year’s Best Actress Oscar winner (for It Happened One Night), Claudette Colbert, as a nice girl turned dirty-blues chanteuse. Further down the totem pole, there’s pre-screwball Carole Lombard as the heroine of Virtue (1932), introduced while being escorted out of New York by the vice squad. Her past won’t quit her when she redeems herself via marriage to cynical cabbie Pat O’Brien. It’s an archetypal pre-Code rediscovery, no doubt thrown together at the time yet wonderfully snappy, saucy, and even poignant now.

Its themes are taken even further by films set in the era’s reliably lawless “tropical” locales, fictive or otherwise. Nothing’s quite so filthy by implication as brief near-star (“The Girl with the Naughty Twinkle in Her Eye!”) Dorothy Mackaill’s 1931 William Wellman-directed Safe in Hell, wherein she’s the runaway goodtime-girl “only white woman on the island.” Save perhaps 1934’s pre-Code last huzzah Black Moon, a voodoo potboiler that puts King Kong’s girlfriend Fay Wray in yea worse peril.