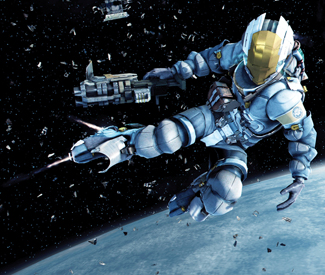 GAMER There aren’t a lot of great horror games on the console market. Even old stalwart Resident Evil gradually dropped anything resembling spooky game play, hoping to conjure the success of Western-developed shooters like Gears of War by incorporating cooperative play and action-packed, cover-based shooting. Good horror is about being alone, outnumbered and outgunned. So when Dead Space 3 was revealed at last year’s E3, fans were appropriately nervous when told the franchise’s new focus would be on cooperative play and cover-based shooting. It was Resident Evil all over again. The horror!

Now that it’s here, perhaps our concerns were misplaced. Dead Space 3 (Visceral Games/Electronic Arts; PS3, Xbox 360, PC) features everything fans were apprehensive about — and some unannounced and sour-tasting micro-transactions — but at its core beats the heart of a classic survival horror experience.

Dead Space‘s formula consists of traversing old spaceships, zero-gravity space, and desolate planets, unloading bullets into undead creepy-crawlies. Picking up shortly after the events of Dead Space 2, in which spaceship engineer Isaac Clarke battled zombies brought to life by alien artifacts called “markers,” Clarke once again is thrust into combat — this time to save ex-girlfriend Ellie and stop religious zealots from activating more markers on the ice planet Tau Volantis.

Dead Space 3 has a wonderful sense of location and atmosphere — hallmarks of any horror game. Rickety, malfunctioning hallways of long-abandoned spaceships fire sparks, creak and sway as you walk through, and enemies have a nasty way of sneaking up behind you with bloodcurdling screams. Although you won’t see the icy surface of Tau Volantis until maybe a third of the way through the game, the planet’s harsh winds and ivory cliffs are a welcome change of scenery. Some gamers will scoff at the “monster closets,” but Dead Space owns the artifice and builds upon it in interesting ways, making firefights consistently tense.

As for the co-op, cover-based shooting and micro-transactions, they are only as unpleasant as you allow them to be. While wholly different from the solitary feel of single-player, co-op is seamless and presents new approaches to combat and puzzle-solving. Being offered downloadable content each time you approach a work bench or spacesuit kiosk breaks the atmosphere of the game, but the weapon customization system is fun to play around with and cover-based shooting is encouraged only a handful of times.

That Dead Space 3 remains a solid traditional horror game in spite of distracting “broad appeal” additions is a dubious accomplishment, but perhaps it’s one fans can live with for the time being. The marketplace’s lack of quality horror games allows some leeway for a series that gets it mostly right. Let’s not get caught up in worrying how these lesser features might expand in the inevitable Dead Space 4; in the here and now, Dead Space 3 is exciting, beautiful, and best of all — scary.