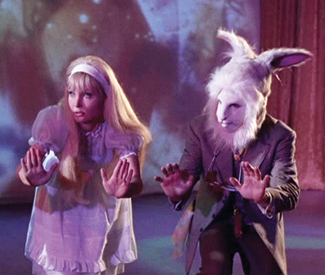 FILM Love is the drug, or so sang somebody once. Yet violent conflict has always been a more predominatingly addicting factor in movies — which is why it seems both natural and despairing that the Vortex Room‘s “For Your Vortex Only” celebration of “Love…Vortex Style” (please guys, only one title per series), every Thursday in February, features eight vintage movies in which “love” is less a matter of romantic fulfillment than a titular selling point.

Which is not to say the Vortex programmers have not ranged far and extra wide to find 16mm prints (when available) of the most obscure and eccentric among odes to St. Valentine, though several weren’t remotely obscure at the time. That would include the kick-off double bill, which starts off with 1979’s Love at First Bite — a post-Young Frankenstein knockoff farce whose selling point was aging Old Hollywood himbo George Hamilton as a Count Dracula exported via coffin-encased necessity to disco-era Manhattan. He’s funny; Richard Benjamin as Jewish-shrink Van Helsing is funnier. Not so much: the tiresome racial stereotypes or clutter of TV sitcom faces.

That movie was a sleeper hit. A shameful semi-success, by contrast, was its Vortex co-feature The Love Machine (1971) — second adaptation of a Jacqueline Susann bestseller after 1967 camp classic Valley of the Dolls, and by far the best. Of course it’s still a glossy, ridiculous swamp of lurid melodrama and degraded “name” actors. John Phillip Law (1968’s Barbarella and Skidoo) probably locked himself out of the mainstream stardom by playing Susann’s soulless, indiscriminately sexually satisfying TV-executive climber. He’s actually very good — more than one can say for the fellow thespians (notably Dyan Cannon, Robert Ryan, Jackie Cooper, and David Hemmings as a particularly mean homosexual caricature) in what was only director Jack Haley Jr.’s second stab at narrative directing before he turned exclusively to celebrating his son-of-Tin-Man Old Hollywood heritage via documentaries like 1974’s That’s Entertainment!

Actual Valentine’s Day programming at the Vortex is certifiably insane: 1935’s Mad Love has Peter Lorre as a mad scientist in the daddy of all severed-transplanted-hands-of-a-murderer thrillers; while 1987’s Love is a Dog From Hell, a.k.a. Crazy Love, channels the Skid Row poetics of Charles Bukowski into a dazzling Belgian demonstration of art house bravado. It’s fatiguingly great.

Yea more obscure are this amorous series’ final selections. The Love War (1970) is a TV movie sci-fi with Lloyd Bridges and Angie Dickinson as combatants on an interplanetary-games war using Earth as its playing field. It’s gimmicky but stupid alongside the next year’s Quest for Love, a clever parallel-time fantasy perhaps beyond the capabilities of director Ralph Thomas (1974’s It’s Not the Size That Counts) and star Joan Collins (whose earnest efforts suggest she never had a naturalistic acting moment in her life).

Unavailable for preview was that Quest‘s Vortex co-feature Love Slaves of the Amazon, a 1957 Universal International exploitation film of which surely more should be known, if only to preserve our fragile balance between the sexes against so much perverted input. Including, of course, camp retrospectives like the Vortex’s. *