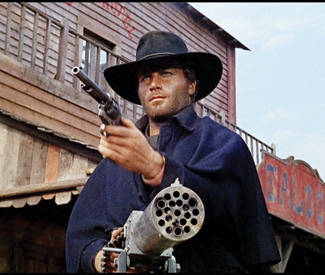 FILM Though it’s much more a Southern than a Western — closer to Mandingo (1975) than Red River (1948), that’s for sure — Quentin Tarantino’s Django Unchained nonetheless pays specific homage to spaghetti westerns in its title and some stylistic fillips.

The subgenre of Euro-westerns that briefly revived the flagging American genre in the mid-to-late 1960s, spaghettis remain defined by their most famous creator, Sergio Leone. He kickstarted the vogue with 1964’s sleeper hit A Fistful of Dollars — a stark, nihilistic tale of greed and revenge that borrowed heavily from Akira Kurosawa’s 1961 Yojimbo and turned Clint Eastwood into an international idol. It wasn’t strictly the first of its type, but the unexpected splash it made, plus its director’s singular cinematic voice, would continue to define spaghettis long after their heyday had passed. The huge close-ups, austere widescreen vistas, sparse dialogue, and cynical and violent content were Leone signatures that would be widely imitated — not just because these films were highly commercial for a time, but because their essences were ones that could be mimicked effectively enough by the lowliest fly-by-night production company.

Before it breathed its last, the genre had coughed up about 600 such knockoffs, the vast majority between 1965 and 1972 or so. Most of them were made in haste, interchangeable in flavor and story, and tedious to all but the diehard fan. As with many Italian-born film export waves, this one ensured its quick demise by cranking out so much crap.

Of course, there were exceptions beyond Leone’s, probably the most beloved and certainly the most influential of them being the original Django. Playing a rare theatrical revival, Sergio Corbucci’s 1966 bloodbath took the morbidity and weirdness of spaghettis — at least compared to their generally wholesome American forebears — and ran amuck, pushing gallows humor to the edge of black comedy. While not nearly as well remembered in the US as the Eastwood films, it was huge at the time, so much so that at least 30 features with “Django” in the title followed, even when no character with that name appeared on-screen.

The reason for all this is that Django, and his movie, remain dead cool. At least you couldn’t get any cooler than that most alarmingly handsome of Italian actors Franco Nero in black floor-length duster and leather hat, dragging a coffin around the desert, striking a stylishly sinister balance between Eastwood’s Man With No Name and José Mojica Marins’ Coffin Joe. His Django was a sardonic figure of mystery seeking revenge on bandits led by a corrupt military officer. Umpteen unpleasant altercations later, there’s a great climactic shootout in a graveyard, cementing Django’s vaguely evangelical air with some outright blasphemy.

Just what was in that box? Death, natch, but not in the way you might think — Django used his coffin as a plus-sized version of the way a movie gangster uses a violin case. The film was so violent for its era, what with ears sliced off and a body count of nearly 150, that it was banned for many years in various countries. The multilingual, far-left-leaning Nero preferred to pursue artistic adventure rather than genre success, making few other westerns. He does, however, duly make a cameo appearance in Django Unchained, sans coffin but still looking mighty fine for 71.