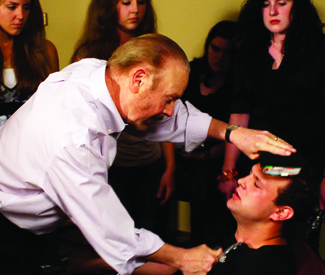 FILM It’s a peculiarity of our moment that the worse things get, the more people seem inclined to think everyone else is going to hell. Their interpretation of the Bible (or Quran, or whatever) is seemingly absolute, yet God seems to stay on their side no matter which way the worldly wind might blow. Righteous judgment of others has practically become the American way, not that we were ever less than an opinionated bunch.

There is much talk of “God’s love,” but in popular and pious discourse these days it seems exclusively to be tough love — the emphasis on cautionary corrective smack downs and threats of everlasting hellfire rather than comfort and salvation, to an often lunatic degree. Just when did so many get so interested in, even quite eager about, waggling a finger at those presumed to be headed Down There?

Documentarian Kevin Miller has an answer: 9/11. At least that provides an easy and dramatic turning point, from which a great many Americans seemed to become experts in who should be doomed to sizzle in that never-ending frying pan. As one political pundit put it on CNN soon after the Twin Towers tragedy, America now had a license to “Blow them all away in the name of the Lord.” A national desire for revenge was understandable. But that event did seem to trigger a fundamental shift in our society, and the public discourse hasn’t much calmed down since.

Miller’s Hellbound? uses reactions to 9/11 as one recurrent measure of why the “eternal conscious torment” theory of hell — as opposed to annihilationism, in which only the righteous experience immortality (the rest are simply destroyed), let alone namby-pamby, forgiveness-based universalism — holds such sway today. All three concepts are equally supported by Biblical passages; various historians and theologians here note how hesitantly Judaism first accepted the notion of a punitive afterlife (apparently inherited from Zoroastrianism), and how debate of such slippery ideas was often — not always, but often — considered a healthy part of religious devotion through the history of Christianity. After all, so many events and messages in the Bible are open to interpretation — not to mention the drastic changes in understanding that can occur when you take into consideration the linguistic, historical, political, and social contexts in which they were originally written (then frequently revised).

Yet as everyone knows, today a great number of people — some loud and influential — overlook all that in the hard certainty that they understand exactly what the Bible means and what God is saying. Particularly what and whom he doesn’t like, which inevitably points fingers at others (the gays, the welfare cheaters, the Muslims, Piers Morgan) rather than oneself. Miller spends a fair amount of time chatting up the hate-a-holics of Westboro Baptist Church, and while you might groan anytime they get a public forum, he actually engages with them sufficiently to avoid a yelling contest — and to demonstrate how “Not only do I damn you but God damns you too” bile is a cartoon masquerading as evangelical faith.

After all, as one calmer voice puts it, playing “paper Pope” as a smug individual interpreter of Biblical condemnation runs counter to a vast majority of what’s actually in that book.

“The irony is that you have this teacher named Jesus and then you essentially side with his enemies in [your] behavior,” says Crazy for God author Frank Schaeffer. “Evangelicism is for America what the Pharisees were in ancient Israel. These guys wreak vengeance on the people who bring the good news about a loving god … because that message puts the gatekeepers out of a job.”

Why would God create enormous numbers of folk — say, all those non-Christian ones — just to send them to Hades? If you’re a Buddhist or a Sikh raised in religious isolation, how have you exercised a personal “choice” against the true God that justifies sending you there? Don’t ask, just shut up, feel the fear, and hate who I hate — or such seems to be the message of many prominent “Christians” of late. But: “If you have a paradigm that doesn’t allow you to ask questions, there’s something wrong with your paradigm,” as another scholar puts it here.

In fact, Jesus was all about the loving enemies, plenty of the Bible suggests ultimate reconciliation and “washing of sins” for all, and isn’t making God hateful just a way of justifying the hate we feel ourselves? Maybe hell was merely meant to be “your condition, not a place … the malice we feel within our own conscience that ‘burns’ us,” an Orthodox rabbi says. God’s justice as restorative and healing, embracing all — the dread word is not heard in Hellbound?, but one could easily imagine many fervent believers of today feeling that that long-running yet currently unfashionable interpretation is dangerously close to, y’know, Socialism. *