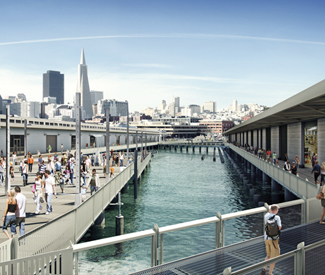 There’s a blocky, unattractive building near the corner of Howard and Steuart streets, right off the Embarcadero, that’s used for the unappealing activity of parking cars. Nobody’s paid much attention to it for years, although weekend shoppers at the Ferry Building Farmers Market appreciate the fact that they can park their cars for just $6 on Saturday and Sunday mornings.

But now a developer has big plans for the 75 Howard Street site — and it’s about to become a critical front in a huge battle over the future of San Francisco’s waterfront.

Paramount Partners, a New York-based real-estate firm that also owns One Market Plaza, wants to tear down the eight-story garage and replace it with a 350-foot highrise tower that will hold 186 high-end condominiums. The new building would have ground-floor retail and restaurant space and a public plaza.

It would also exceed the current height limit in the area by 150 feet and could be the second luxury housing project along the Embarcadero that defies the city’s longtime policy of strictly limiting the height of buildings on the waterfront.

It comes at a time when the Golden State Warriors are seeking permission to build a sports arena on Piers 30 and 32, just a few hundred feet from 75 Howard.

Between the proposed 8 Washington condo project, the arena, and 75 Howard, the skyline and use of the central waterfront could change dramatically in the next few years. Add to that a $100 million makeover for Pier 70, the new Exploratorium building on Pier 15, and a new cruise ship terminal at Pier 27 — and that’s more development along the Bay than San Francisco has seen in decades.

And much of it is happening without a coherent overall plan.

There’s no city planning document that calls for radically upzoning the waterfront for luxury housing. There’s nothing that talks about large-scale sports facilities. These projects are driven by developers, not city planners — and when you put them all together, the cumulative impacts could be profound, and in some cases, alarming.

“There hasn’t been a comprehensive vision for the future of the waterfront,” Sup. David Chiu told me. “”I think we need to take a step back and look at what we really want to do.”

Or as Tom Radulovich, director of the advocacy group Livable City, put it, “We need to stop planning the waterfront one project at a time.”

Some of the first big development wars in San Francisco history involved tall buildings on the waterfront. After the Fontana Towers were built in 1965, walling off the end of the Van Ness corridor in a nasty replica of a Miami Beach hotel complex, residents of the northern part of the city began to rebel. A plan to put a 550-foot US Steel headquarters building on the waterfront galvanized the first anti-highrise campaigns, with dressmaker Alvin Duskin buying newspaper ads that warned, “Don’t let them bury your skyline under a wall of tombstones.”

Ultimately, the highrise revolt forced the city to downzone the waterfront area, where most buildings can’t exceed 60 or 80 feet. But repeatedly, developers have eyed this valuable turf and tried to get around the rules.

“It’s a generational battle,” former Sup. Aaron Peskin noted. “Every time the developers think another generation of San Franciscans has forgotten the past, they try to raise the height limit along the Embarcadero.”

The 8 Washington project was the latest attempt. Developer Simon Snellgrove wants to build 134 of the most expensive condominiums in San Francisco history on a slice of land owned in part by the Port of San Francisco, not far from the Ferry Building. The tallest of the structures would rise 136 feet, far above the 84-foot zoning limit for the site. Opponents argued that the city has no pressing need for ultra-luxury housing and that the proposal would create a “wall on the waterfront.”

Although the supervisors approved it on a 8-3 vote, foes gathered enough signatures to force a referendum, so the development can’t go forward until the voters have a chance to weigh in this coming November.

Meanwhile, the Paramount Group has filed plans for a much taller project at 75 Howard. It’s on the edge of downtown, but also along the Embarcadero south of Market, where many of the buildings are only a few stories high.

The project already faces opposition. “The serious concerns I had with 8 Washington are very similar with 75 Howard,” Chiu said. But the issues are much larger now that the Warriors have proposed an arena just across the street and a few blocks south.

“Because of the increase in traffic and other issues around the arena, I think 75 Howard has a higher bar to jump,” Sup. Jane Kim, who represents South of Market, told me.

Kim said she’s not opposed to the Warriors’ proposal and is still open to considering the highrise condos. But she, too, is concerned that all of this development is taking place without a coherent plan.

“It’s a good question to be asking,” she said. “We want some development along the waterfront, but the question is how much.”

Alex Clemens, who runs Barbary Coast Consulting, is representing the developer at 75 Howard. He argues that the current parking garage is neither environmentally appropriate nor the best use of space downtown.

“Paramount Group purchased the garage as part of a larger portfolio in 2007,” he told me by email. “Like any other downtown garage, it is very profitable — but Paramount believes an eight-story cube of parking facing the Embarcadero is not the best use of this incredible location.”

He added: “We believe removing eight above-ground layers of parked cars from the site, reducing traffic congestion, enlivening street life, and improving the pedestrian corridor are all benefits to the community that fit well with the city’s overall goals. (Of course, these are in addition to the myriad fees and tax revenues associated with the project.)”

But that, of course, assumes that the city wants, and needs, more luxury condominiums (see sidebar).

Among the biggest problems of this rush of waterfront development is the lack of public transit. The 75 Howard project is fairly close to the Embarcadero BART station, but when you take into account the Exploratorium, the arena, and Pier 70 — where a popular renovation project is slated to create new office, retail, and restaurant space — the potential for transit overload is serious.

The waterfront at this point is served primary by Muni’s F line — which, Radulovich points out, “is crowded, expensive, low-capacity, and not [Americans with Disabilities Act]-compliant.”

The T line brings in passengers from the southeast but, Radulovich said, “if you think we can serve all this new development with the existing transit, it’s not going to happen.”

Then there are the cars. The Embarcadero is practically a highway, and all the auto traffic makes it unsafe for bicycles. The Warriors arena will have to involve some parking (if nothing else, it will need a few hundred spaces for players, staff, and executives — and it’s highly unlikely people who buy million-dollar luxury boxes are going to take transit to the arena, so there will have to be parking for them, too. That’s hundreds of spaces and new cars — assuming not a single fan drives.

And all of this is happening at the foot of the Bay Bridge, the constantly clogged artery to the East Bay. “Oh, and there’s a new community of 20,000 people planned right in the center of the bridge, on Treasure Island,” Peskin pointed out.

Is it possible to handle all of the people coming and going to the waterfront (particularly on days where there’s also a Giants game a few hundred yards south) entirely with mass transit? Maybe — “that’s the kind of problem we’d like to have to solve,” Radulovich said. Of course, the developers would have to kick in major resources to fund transit — “and,” he said, “we don’t even know what the bill would be, and we don’t have the political will to stick it to the developers.”

But a transit-only option for the waterfront is not going to happen — at the very least, thousands of Warriors fans are going to drive.

The overall problem here is that nobody has asked the hard questions: What do we want to do with San Francisco’s waterfront? The Port, which owns much of the land, is in a terrible bind — the City Charter defines the Port as an enterprise department, which has to pay for itself with revenue from its operations, which made sense when it was a working seaport.

But now the only assets are real estate — and developing that land, for good or for ill, seems the only way to address hundreds of millions of dollars in deferred maintenance and operating costs on the waterfront’s crumbling piers. And the City Planning Department, which oversees the land on the other side of the Embarcadero, is utterly driven by the desires of developers, who routinely get exemptions from the existing zoning. “There is no rule of law in the planning environment we live in,” Radulovich said. So the result is a series of projects, each considered on its own, that together threaten to turn this priceless civic asset into a wall of concrete.