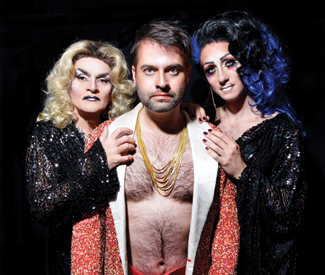 SUPER EGO So, there is a hipster church called Reality SF. (Not to be confused with the pretty great, all-singing, some-dancing hipster synagogue, the Kitchen — www.thekitchensf.com. “Slow down, Jew up.”) I’m not sure what all goes on there because Jesus is kind of mainstream. But I do know that every Sunday morning when I’m crawling home from whosever’s house, there’s this amazingly fly and fashion-forwardy crowd of young people on the sidewalk outside Swedish American Music Hall. The hot hair alone had me praising the Holy Spirit. I needed to know more.

Turns out the Reality church dealie — www.realitysf.com, founded in 2010 — comes with indie-flavored music (plus set lists and free downloads), slick videos and podcasts, roving locations, and a charismatic leader named Dave. And, for the month of January, the glamorous congregation is meeting at Everett High School for “slow church” Sundays, including food trucks and a climactic re-baptism using a giant kiddie pool. Paging Portlandia: our SF reality is basically writing your next season. In any case: yes, it’s gay-friendly, but it’s still a bit conservative, so you probably won’t get laid there. However, you may get some great tips for your 2k13 look.

Is minimal techno retro yet? Of course, the scintillatingly clean sound (once dubbed “Windex music” by our own Greg Bird of the Kontrol crew) never really went away. But essential minimal label Poker Flat was launched in 1999 (the same year Richie Hawtin dropped seminal Decks, EFX, & 909) — next in line, after a forthcoming drum and bass revival, on our retro creep up the ’90s. Poker Flat founder Steve Bug’s appearance should be a treat for those who want to revisit the sound — and see what tech-house-y things Bug’s been doing with it.

One of my musical high points of 2010 was seeing dreamy glitch-hop pioneer Prefuse 73 at Slim’s, engaging in a ear-blowing impromptu jam session with a live guitarist and gonzo future bass guru Gas Lamp Killer on drums. As the live opener for beloved Philly trippy-hopper RJD2 (also live), I’m sure more sparks will fly high.

Really looking forward to some earhole mindfuckery from various experimental electronic crews at the bleeding edge Lab space. With Antimatter, Pulsating Cyst, Ebony Cubbyhole, Beast Nest, Moo Kao, Ribspace, and more. I made none of the above names up.