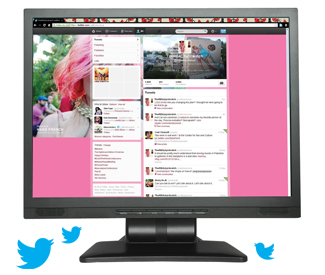 It bore reflection one day last month: Why does New York journalist-party disaster Cat Marnell have 20,000 more Twitter followers than me? Her quote about quitting her xoJane editorship to do angel dust was gold, but still.

In a world where relevancy is determined by your profile stats, I’m not alone in this, surely. No matter how much time some of us spend hashtagging, cross-linking, shouting-out, one never has as much social networking impact as one would like. Twitter baffles me sometime.

Thankfully, we live in a world where these perceived inadequacies can be dispersed with the click of a mouse.

Welcome to the business of paying for Internet followers. Spend five seconds on a quick Google search (try “buy Twitter followers,” for example) and like Jezebel posts on insensitive media trends, they will appear: firms that contract with overseas programmers who spend their days creating fake online profiles, or bots, that can be summoned to announce their proclivities for anyone willing to brave this ethical gray space. Fake Internet celebrity, if that’s not too redundant a term.

These fakeries are the cheapest thing you can buy in this world. My mouse hovered over the button on a site called Intertwitter: really 2,500 for $26? Hell yes — wisdom of handing over one’s credit card information to a person who creates fake Internet profiles be damned.

It would take three to five business days, said the site, for my newfound flocks to assemble. Biding time until relevance, I reached out to several of the fake follower companies, hoping that they’d share a little with me about the business of fake friends. Somewhat to my surprise, most were polite and forthcoming about their mission.

The vice president of my benevolent friend-finder Intertwitter, Armani Prescott, assured me that the business of fake friends attracts all kinds of Internet entities, “from oil sheiks in Dubai to small mom-and-pop operations in West Virginia,” he wrote me in an email. “Celebrities, politicians, professional athletes, start up companies, and just average, ordinary people” use his services. It has to do with search engine optimization, he said, but also just with creating confidence in whomever’s browsing your profile.

And, real talk: “People use our services for all kinds of reasons including brand impact,” Prescott told me. “But also just because they want to have more [followers] than their friends.”

Over the course of 24 hours on July 21 of last year, perpetually robot-faced presidential candidate Mitt Romney picked up almost 117,000 Twitter followers. The campaign’s sole tweet from that day was a link to a contest whose winner would join Mittens for a day on the road to the White House — hardly a revolutionary breakout for a social media campaign whose last follower increase of that size had taken roughly a month to accrue.

Of course, the uptick was fake. Romney’s campaign denied buying the fake followers, but if people really gauge worth by perceived Internet influence, the incident could be a sign of the darker side of buying Internet popularity. President Obama’s rockstar Twitter account (which at 25.5 million adherents is one of the top most followed accounts on the site, as compared to the now-defunct Romney account’s paltry 1.6 million) could have an even higher percentage of bot followers than his 2012 campaign opponent, some researchers have found.

When digital marketers Advocate Media ran a check on our national elected representatives, it found that members of US Congress had an average of 38 percent fake followers. Senators had an average of 42 percent fake and inactive accounts following them. When social media analysts PeekYou examined the honorable Newt Gingrich’s Twitter account during his not-yet-failed presidential campaign, it uncovered that no less than 92 percent of his followers were figment.

Although as Zach Moffat, the Romney campaign’s digital director, pointed out while denying claims he had bought bots, if Twitter followers were everything, we’d have been looking at a President Lady Gaga or Justin Bieber presidential win in 2012. To be fair, Gaga and Beebs never asked us to vote for them, so his logic is slightly off.

The major fallacy in all this, of course, is that these followers are not real people. Regardless of how witty my live tweeting of family members’ peccadillos over the holidays would turn out, the bots would never retweet me. Romney’s and Obama’s bots did not turn out for their rallies or cast ballots. Sure, they make your profile page look nice, but do fake followers really lead to more real-life influence?

“I can say that from my experience, that is 100 percent correct,” wrote the CEO of FanMeNow.com, who identified themself as A. Delgado. FanMeNow, Delgado told me, is Brooklyn-based and employs three full-time workers and five independent IT contractors. “I have seen first hand, and also received testimonials from clients, that right after their boost, they began receiving many real followers. The only correlation I can make is their new social presence being the cause for this drastic change.”

“I do know that when I’m looking for a song on YouTube and there are several videos with the song title in it, I pick the one with the most views,” wrote Prescott in response to the same question. “I’m assuming the majority of people out there do the same — or maybe I’m just an odd ball?”

Not everyone agrees. Jeremy Scott created video marketing firm Viral Orchard, which employs all sorts of techniques to grow the popularity of online brands among meat puppet Internet users. Scott advises clients away from buying fake views and followers.

“The savvy brands know there’s long-term value in more than just a simple view,” he explained. “The engaged viewer shares the content, discusses it, and comes back for more. Bought views don’t translate into comments, likes, or shares the way real views do. And at the end of the day, if all you can really say about your video is that it had a lot of views and not much else, then I don’t see a lot of value in that.”

Scott insists that the fake followers are only good for the initial boost that your profile gets. But to his way of thinking, you’re better off just buying a sponsored ad slot on social networking sites, which can target your content towards viewers who are picking up what you’re putting down, as it were.

Plus, there’s the potential for discovery when you buy fake followers. Run a Twitter handle through StatusPeople’s search engine (fakers.statuspeople.com) and you’ll see in seconds that around 85 percent of my flock hails from bot land.

Awareness about faking it on the ‘Net is growing. At the end of last month, YouTube removed more than 2 billion views from major label recording artists. Will.i.am, Nicki Minaj, Beyonce, Chris Brown, Avril Lavigne, and Michael Jackson’s page were all docked, YouTube claiming that the views had been arriving at through artficial means. Websites like Business Insider have published lists of the top business fakers that include Google (47 percent fake), YouTube (33 percent), Twitter (47 percent), and Twitter Español (61 percent.)

Of course, not all bots are bought bots. Ever received a freaky link from one of your followers on Twitter? Some bots are meant for virus transmission, and latch onto popular accounts to increase their perceived legitimacy. Perhaps being followed by more accounts makes you more suspectible.

ARE MY BOTS RACIST?

The bots came sooner than I anticipated. Though Intertwitter had predicted I would see my 2,500 new friends join the party within three to five days, most came overnight. In fact, I saw even more than the promised amount drop in.

Because every writer needs to know her audience, I investigated my bots. @CandraObrien, with her profile photo featuring a shock of bleached blond and deep blue hair, looked like someone who might follow me in real life. I clicked to her feed and the first tweet to greet my eyes was awfully, unnecessarily racist. A nursery rhyme with slurs plugged in. The n-word? Candra, why?

It was a moment of panic. Would I be judged by my racist bots? Why the hell would the overseas programmers that my fake follower hawkers had described write racist tweets for my shadow minions?

But generally, bot feeds were comprised of sweet, generic affirmations (“Move on past your divorce & plan for the future, as that’s where u are going to spend the rest of your life & it is so bright it glimmers.”), crude outbursts (“I Wanna Fuck Those Huge Melons !!!!!!”), and marked by a mix of languages unlikely to occur in any one person’s nomenclature (@BenitaSheppard3 supplied us with all these gems — her feed also includes tweets in Portuguese and multiple Asian languages.)

Some day, I will write slam poetry created from the tweets of my bots. My fake follower experts told me these profiles would stick by my side for a year. I hope they stay for ever. Besides the racist one. (Candra, get help.)

I realized that my entirely questionable social networking had paid off while bonding with a colleague over drinks. “I just wanted to tell you that your writing has been going so well!” she enthused into our third beers and mutual writerly appreciation. “I was just reading over your most recent articles, they’re amazing. And you’re doing so well on Twitter — 3,000 followers!”

She dissolved in embarrassment when I confessed my scheme, insisting that the number hadn’t overly influenced her compliment. In fact, after a round of direct messages to some of my new real followers, not a one would admit that my pixelated new breasts had been what had impressed them sufficiently to hit that “follow” button, per se. “Did you follow me because I tricked you with spam bots?” is a weird question to answer to in the affirmative.

Although: “&yes — it’s assumed if you have lots of followers you have an entertaining/funny/ culturally relative twitter and I should prob follow you,” Desiree Hersey, an SF club promoter/X-rated crafter extraordinaire told me.

“In general I am more likely to follow someone on Twitter who I don’t know if they have a lot of followers. But it’s not just the number of followers, but the spread between the number of ‘follows’ and ‘followers,'” explained Philly’s investigative journalist Daniel Denvir.

BUT IS IT RIGHT?

Did Romney’s bot army get him closer to the White House? Was my Intertwitter boob job a breach of Internet morality? I put the question of ethics to the fake follower professionals.

“Is it ethical to recall all of the gold and silver in the world’s currency and hand out worthless paper in its place?” wrote Prescott in a somewhat distractionary paragraph that left me with rather more questions than less. “Is it ethical to allow collateral damage in war, in the form of woman and children? Is it ethical to take the citizens’ guns and leave them defenseless against a tyrannical government? Bottom line, ethical’ness’ is different for everyone in regards to their perspective on the matter.”

Delgado stuck closer to the point, inasmuch as celebrities are always the point.

“I believe it is ethical only because Celebrities [all capitalization Delgado’s own] have been doing this for years. Way before companies like ours started offering these services, it was exclusively only offered to Top Notch Celebs. It isn’t hard to see that it would be very difficult for someone to compete in an industry where only the Elite were allowed to use these services. I am helping to close the barrier.”

I liked Delgado’s egalitarian thinking. Hell, if I was willing to spend another $1,500 on bot love, I could be the next Mitt Romney.