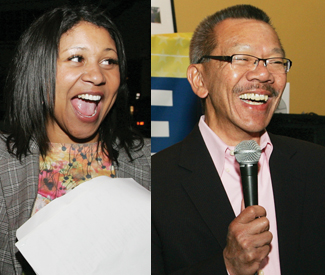 Political dynamics on the Board of Supervisors moved into uncertain new territory this week with the inauguration of two new members -– London Breed and Norman Yee –- who break the mold in representing districts that have long been predictable embodiments of opposite ideological poles.

Breed and Yee are both native San Franciscans with deep roots in their respective districts, which they tapped to win hotly contested races against challengers who seemed more closely aligned with the progressive politics of Dist. 5 and the fiscally conservative bent of Dist. 7. Both tell the Guardian that they represent a new approach to politics that is less about ideology and more about compromise and representing the varied concerns of their diverse constituencies.

“I don’t see everything as a compromise, but I want to be sure we find compromises where we can and don’t let personalities get in the way,” said Yee, whose background working in education and facilitating deals as a school board member belies District 7’s history of being represented by firebrand opponents of the progressive movement.

Some of the strongest champions of the pro-tenant, anti-corporate progressive agenda have come from the Haight and Dist. 5, a role that Breed has no intention of playing. “When you talk about the progressives of San Francisco, I don’t know that I fit in that category,” Breed told us. “I’m a consensus builder. I want to get along with people to get what I want.”

Yet what Breed says she wants are housing policies that protect renters and prevent the exodus of African-Americans, and development standards that preserve the traditional character of neighborhoods against corporate homogenization. “I don’t see the difference between my causes and progressive causes,” she said, claiming a strong independence from some of the monied interests that supported her campaign.

We spoke a few days before the Jan. 8 vote for board president (which was scheduled after Guardian press time, and which you can read about at the SFBG.com Politics blog). Neither Yee nor Breed would tip their hands about who they planned to support -– the first potential indication of their willingness to buck their districts’ ideological leanings.

Breed had raised some progressive eyebrows by telling the Guardian and others that she admired moderate Sup. Scott Wiener and would support him for president, but she had backtracked on that by the time we spoke on Jan. 5, telling us, “I’m going into this with an open mind.

“I’m waiting on my colleagues to decide who has the most votes,” Breed said, ing a candid take on valuing compromise over conflict. “I really would like to see us walk into this all together.”

Yee had similar comments. “They’re all competent people and can be leaders, it just depends on where they want to lead us,” he said. “I value people who can work with anyone and see themselves as facilitators more than as dictators.”

Both Breed and Yee come from humble roots that they say give them a good understanding of the needs of the city’s have-nots. Breed was raised in the public housing projects of the Western Addition, an experience that makes her want to solve the current dysfunction in the San Francisco Housing Authority.

“I can’t tell you what needs to be done, but I can tell you something is wrong,” Breed told us. “My goal is to get to the bottom of it and be extremely aggressive about it.”

Yee grew up in Chinatown, his father an immigrant who worked as a janitor, his mother a garment worker. They later lived in the Sunset and the Richmond, and Yee moved into his district’s Westwood Park neighborhood 26 years ago.

When Yee was eight years old, the family saved enough money to open a grocery store at 15th and Noe, and he said that he basically ran the store in his teen years while his father continued working another job.

That was where Yee developed his deep appreciation for the role that small, neighborhood-serving businesses play in San Francisco. In an era before credit cards, he would offer credit lines to local customers struggling to make ends meet; that experience showed him how stores like his family’s were essential parts of the city’s social and economic fabric.

“That’s why I value small businesses,” Yee said, calling that his top focus as a supervisor. “They’re going to have a bigger voice now.”

Yee draws a clear distinction between the interests of small business and that of the larger corporations that dominate the powerful San Francisco Chamber of Commerce. Asked where he might have placed on the Chamber’s recent scorecard ranking supervisors’ votes — where Yee’s predecessor, Sean Elsbernd, got the highest marks — Yee said, “Probably not on their A list. They are just one entity in San Francisco and I’m not going to be judged just by them.”

At 63 years old, Yee is by far the oldest member of the youngest Board of Supervisors in recent memory, while Breed, at 38, is closer to the current average. Yee hopes his age and experience will help him forge compromises among all the supervisors.

“People draw their lines, but I try to listen to people and see where their lines are,” Yee said. “It’s a balancing act, but at the same time, there’s things I’ve been working on all my life, like education and safety net issues, and this district does care about those things. At the same time, they care about their homes. Are these issues in conflict? I don’t think they have to be.”