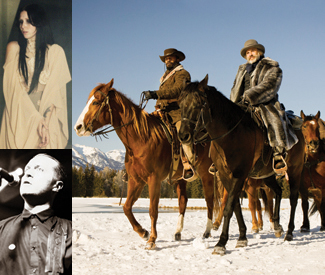 TOFU AND WHISKEY Ah, the tormented love song. Chelsea Wolfe does it well. Vocally, she transfixes, sometimes sounding like she’s calmly wringing every ounce of blood from a relationship totem, at other points whispering cries of help from a enveloping darkness, the vibrations of the plucked-hard guitar strings reverberating in the distance. This rush of gloom and pain, in a genre she’s past described as “doom folk,” came forth in a fierce package in 2011’s electric Apokalypsis, and steadily zigzags beautifully through 2012’s meandering Unknown Rooms: A Collection of Acoustic Songs.

This weekend, the LA-via-Sacramento singer-guitarist comes to SF with a fellow dark folk spirit, King Dude (Fri/11, 9pm, $15. Great American Music Hall, 859 O’Farrell, SF. www.slimspresents.com). The two once recorded a split seven-inch together, and have played a few shows here and there, but this will be their first full tour together, which surprises King Dude, as tells me via phone from his homebase in Seattle, because they’re longtime pals who “got on like a house on fire” when they first met.

They’re both on the spectrum of a bubbling rebirth of neofolk and gothic Americana roots, inspired by acts like Death in June, and seen elsewhere in musicians like Emily Jane White and Father John Misty, but really driven recently by Wolfe and Dude, in unique ways.

Though King Dude — a.k.a Seattle’s T.J. Cowgill of black metal bands Teen Cthulhu and Book of Black Earth, and clothing label Actual Pain — also has some experience with tortured love songs. His baritone vocals often sound as if there’s a gravelly demon inside, clawing to get out. The lyrics of his 2012 release, Burning Daylight, tend to reflect inner, unearthly struggles, the occult, fears of death, and tragic old world tales. Or as he told another publication, he’s inspired by “death, religion, love, Lucifer, nature, primal feelings.” Most of the tracks have fully imagined narratives.

There’s the song “Barbara Anne” in which he growls, “I’ll shoot that man in the head if he hurts you, Barbara Anne” and “I’ll run away with you if you’ll have me, Barbara Anne.” It’s the tale of small-town love, set in 1940s, around two characters — a boy and the girl he wants, who’s been wronged by the town. “I think it’s probably the best love song I’ve ever written,” Cowgill says. “The kid is like: ‘I’ll kill everybody in the town for you, if that’s alright with you.’ That’s the most loving thing I think anybody can say for somebody else.”

In his reality, his allegiances lie with his musician wife, Emily, and their seven-year-old black lab, Pagan, the latter of which is currently at the vet getting checked before King Dude heads out on tour with Wolfe, just to make sure everything is OK.

There have been countless articles dissecting every shot of Quentin Tarantino’s newest revenge fantasy, Django Unchained. From “the Django moment” (when white people laugh) to Kerry Washington’s costume designer’s secrets to “Why Django Had to Be a Spaghetti Western,” bloggers and squawkers have been raising important, sometimes frivolous theories about the controversial, often brutal film, set in an alternate version of the antebellum era of the Deep South. But what stood out to me, was the Django Unchained soundtrack; no big shocker, given the director.

The music takes over and transports immediately, with “Django (Main Theme)” by Luis Bacalov and Rocky Roberts, a powerful, full-throated song that was also the title track to the 1966 Spaghetti Western, Django. The opening credits are startling enough, setting a vividly emotional tone, but the song adds the outlining whomp, the exclamation mark. The dusty plucking and Elvis-like vibrato of “Jane-gooo” just stick in your brain. While on “Little Steven’s Underground Garage” show on Sirius Radio, Tarantino discussed his reasoning behind the music in the film. Of the theme he said, “When I came up with the idea to do Django Unchained, I knew it was imperative to open it with this song.”

The soundtrack weaves through ominous and plucky original Spaghetti Western themes, Brother Dege’s twangy stomper “Too Old To Die Young,” John Legend’s funky blacksploitation-style anthem “Who Did That To You” (which ended up on the soundtrack after Legend recorded it on cassette and mailed it to Tarantino), and pummeling hip-hop bangers, “Unchained (the Payback/Untouchable)” — a mashup of James Brown’s “The Payback” and 2Pac’s unreleased “Untouchable” — and “100 Black Coffins” by Rick Ross and Jamie Foxx.

Tarantino said on the radio show that this was the first time he’d included new music in one of his films, and it was thanks to the star and title character, Jaime Foxx, who ran into rapper Rick Ross at the BET Awards and invited him back to the set to work on a song together. The song is clearly influenced by the surroundings, with a Western whistle underneath a molasses beat and lyrics like “revenge is the sweetest.” and “I need 100 black coffins for 100 bad men/…I need 100 black bibles while we send ’em all to hell.”

There’s also the deceivingly calmer moments thanks to songs like Jim Croce’s “I Got a Name,” as Django is given his freedom, which left another lump in my throat. That track also has the needle drop and minimal fuzz of the record collector nerd Tarantino is. He’ll often use his own vinyl on the soundtracks. It’s a “whole record experience,” as he describes it. “Pops and crackles be damned.”

It’s true, prolific garage rocker Ty Segall has yet another new band. This one’s called Fuzz, and it includes Segall on drums and vocals (just like in his pre-Ty Segall Band band, Traditional Fools!) and longtime collaborator-pal Charlie Moothart on guitar. The dudes just released new single “This Time I Got a Reason,” played Vacation last weekend, and will be a part of Noise Pop 2013: Feb. 28 at the Knockout ($8).

After a period of moody silence, underground Harlem rap duo Cannibal Ox has returned — to the stage, at least. Vast Aire and Vordul Mega announced a one-off reunion show in NY late last year, and that must have gone well, ’cause now they’re heading our way on a full tour. Also noteworthy: Aire and Mega only put out one album as Cannibal Ox, 2001 indie hit The Cold Vein, produced by El-P. Now they’re working on a 2013 followup on Iron Galaxy Records.