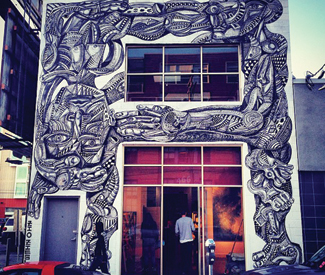 STREET SEEN Remember 2012, the year when Instagram was queen of the social networks? Young creatives flocked to the photo-sharing app in the year of the Mayan apocalypse and Tard the Grumpy Cat, a sleek, pretty substitute to our backlog of thousands of antiquated Facebook friends and their daily lives.

For creative types, the network presented itself as an alternative to obligatory social connections — on Instagram, it was easier to fill one’s newsfeed with images that rung your bell, artists you worshiped, the inspiring outfits of fashionistas you’d never meet in real life. It felt less oppressive than the omnipotent Facebook, even after that site bought Instagram in early April.

“I’m somewhat of a Luddite,” Dogpatch-Marin artist Zio Ziegler wrote me in an email talking about his Insta-usage. Ziegler’s detailed, folkloric creatures curl around buildings in the Mission and elsewhere in the Bay (check out his piece on Hemlock Tavern for a good example.) He shares images of his murals, paintings, and bike rides up scenic mountainsides on the app, using it as an easy portfolio. “Updating my website is not my favorite thing to do. Instagram serves as the low-entry barrier alternative, with a better and more social result,” he wrote.

Double-click hearts abounded in Insta-land in 2012. Users hit 14.5 million around Thanksgiving. When we said “pictures or it didn’t happen,” we were talking about square photos with varying patinas and resolutions (maybe even geo-tagged.)

And then, the fall? In mid-December, Instagram announced some changes to the language in its terms of service:

Instagram can sell your photos to whoever it wants without telling you? Commence hashtag storm! #goodbyeinstagram started trending like nobody’s business, and mere days later, the site reverted back to its original language — still, AppData reported that nearly a quarter of the site’s users (at least those who sign in via Facebook) fell off during Christmas week. That number may just reflect holiday-time unplugging, as the company suggests.

Time will tell. But that “original language?” It reads in part that users “agree that Instagram may place… advertising and promotions on the Service or on, about, or in conjunction with your Content.” Basically, the company’s always had the rights to your images. Just like Facebook.

In this day and age, it’s up to artists, fashion professionals, Aunt Debbie, and your rock-climbing cousin to figure out what it means that by sharing their information with their online worlds, we’re all sharing it with the corporate world, in the tangible, financial sense of the word.

One response to the quandry has been indifference. Many Instagram users I’ve talked to who use the app for professional reasons have told me that they’re happy if their content reaches more eyeballs. Watermark your shots, they’ve told me, as though copyrights and watermarks can’t be removed with ease.

Is all exposure good exposure? Should we just trust Instagram not to sell that sunset shot you took from your hotel’s lanai in Kauai to hotel itself? Or hawk the one of your smiling buddies to Verizon? Or more ominously, if a corporation does indeed want the original artwork of a visual artist, does Instagram have our faith not to serve as a stock photography site, handing over images at a lower rate than the artist ever would have?

“I’ll keep using the site,” says Ziegler. “But I’m for sure going to upload more selfies, and pick all the wrong filters. Try monetizing that.” It’s pretty good advice — reserve your truly killer shots for paying customers (or Flickr’s new app — that site has always allowed users to choose their own rules on how photos can be shared.) The Internet age has made it necessary for us to balance our desire for more followers and fans with our desire to maintain control over the content to which we’re attracting them.

So, all Kelvin everything! Instagram humor. I guess I’m not breaking up with the site yet either.