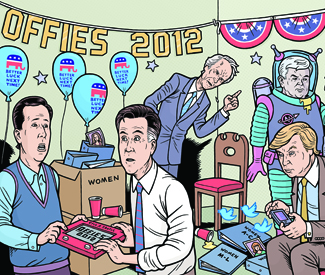 Could it be — the worst year ever?

I keep asking. And every time the Offies come around, I find myself boggled yet again. Our awards for the very worst — the dumbest, the most tasteless, the most truly offensive acts of the year past — keep sinking lower and lower.

But what can we do? There are still Republicans, and this year a lot of them ran for high office, and every single one made a fool of himself. There are still politicians who think you can run for San Francisco supervisor even if you live in Walnut Creek, and elected leaders who find the courage deep in themselves to prevent a bunch of old men from walking around with their sagging asses and limp dicks out.

There are still entertainers who punch psychics, and gun nuts who blame mass murder on TV sex, and … well, a whole lot of people who have made this a banner year for the Offies.

SUPPORT OUR BRAVE, HEROIC TROOPS! (EXCEPT THE MEN WHO FUCK MEN)

The audience at a Republican presidential primary debate booed a gay solider who called in from Iraq with a question about don’t ask, don’t tell.

FROM A GUY WHO HAD TO BUY OXYCONTINS AND VIAGRA ON THE STREET, THIS SORT OF THING IS AN OBVIOUS CONCERN

Rush Limbaugh attacked law student Sandra Fluke, calling her a “slut” and a “prostitute” because she testified that health-care plans should cover contraceptives.

Mitt Romney said he really liked Michigan because the trees were all the right height.

GIVING NEW MEANING TO THE 1 PERCENT

Herman Cain proclaimed that for every woman who claimed he sexually harassed her, there were a thousand others who didn’t.

IF WE WANTED A DRESS CODE ON AIRLINES, WE’D START WITH THOSE DREARY PILOT UNIFORMS

An American Airlines pilot kicked a woman off a flight for wearing a shirt that said “if I wanted the government in my womb I’d fuck a senator.”

PROBLEM IS, BUSH MADE THAT ONE A CABINET-LEVEL POSITION

Rick Perry proclaimed in a debate that he was going to do away with three agencies of the federal government, but after listing Commerce and Education, he couldn’t remember what the third one was, identifying it only as “oops.”

FOR SOMEONE WHOSE NAME MEANS ASS-CUM JUICE, THAT’S A REALLY PRETTY PICTURE

Rick Santorum said that he’d listened to John F. Kennedy’s speech on the separation of church and state and it made him want to throw up.

LOOK! UP AT THE RAMPARTS! THE MAN WITH THE HAIR!

Donald Trump, mistakenly believing Romney won the popular vote but lost the election, called the election “a sham and travesty” and called for “revolution.”

Romney insulted the British by saying the nation didn’t appear ready to host the Olympics.

More than 50 thousand people signed a White House petition asking for permission for Texas to secede.

On the same day that a gunman opened fire at a showing of the Dark Knight movie in Colorado, the National Rifle Association’s magazine sent out a tweet that read: “Good morning, shooters! Happy Friday.”

A Congressman from Texas, Louie Gohmert, argued that the Dark Knight shootings happened because of “ongoing attacks on Judeo-Christian beliefs.”

Mike Huckabee blamed the massacre in Newtown, CT on atheism. “We ask why there is violence in our schools, but we have systematically removed God from our schools,” Huckabee said on Fox News. “Should we be so surprised that schools would become a place of carnage?”

Timothy Bordnow at Tea Party nation said the shooting was caused by too much sexual stimulation in the media . “There is a reason why young people commit these sorts of crimes, and sex plays no small part. Their passions are eternally inflamed, and they wander the Earth with no outlet for their overstimulated glands.”

Megan McArdle, the Daily Beast writer, urged the victims of mass shootings to gang-rush the shooter so he wouldn’t kill as many people.

The head of the National Rifle Association said the only way to stop mass murders of school children is to post armed guards in every school.

WHEN YOU’RE A MAJOR LOSER, EVEN MONEY CAN’T BUY YOU LOVE

Michael Breyer, who has never been elected to anything, spent roughly $1 million trying to win a state Assembly seat as the candidate of “traditional San Francisco values,” and lost badly.

AND THESE PEOPLE ARE COOPERATING WITH HOMELAND SECURITY?

Confetti thrown in the Giants parade turned out to be lightly shredded internal police documents that included home addresses and social security numbers of officers.

Mayor Ed Lee testified under oath that he’d never discussed the Ross Mirkarimi case with members of the board of Supervisors, although friends of Sup. Christina Olague said she’d been open about her talks with the mayor on the topic.

NOW, WHICH ONES ARE THE IRON MONSTERS OF DEATH?

A San Francisco bicyclist who was allegedly trying to beat a speed record crashed into and killed a 71-year-old man in the Castro.

Union official Leon Chow dropped his challenge to Sup. John Avalos when the SF Appeal revealed that he didn’t live in District 11, or even in San Francisco.

WHEN MEN ARE JUST TOTAL DICKS: THE GOP REDEFINES RAPE

1. Divine providence rape (Rick Santorum): “The right approach is to accept this horribly created .. gift of life, accept what God is giving to you.”

2. Honest Rape (Ron Paul): “If it was an honest rape, that individual should go immediately to the emergency room.”

3. Forcible Rape (Paul Ryan): Federal law should prevent abortion except in the case of “forcible rape.”

4. Emergency Rape (Linda McMahon): “It was really an issue about a Catholic Church being forced to issue those pills if a person came in with an emergency rape.”

5. Legitimate Rape: (Todd Akin): “If it was a legitimate rape, the female body has ways to try to shut that whole thing down.”

After a Justin Bieber concert, Lindsay Lohan punched a psychic in the face at a New York nightclub, then threw her personal assistant out of the car.

YEP, AND IT DOESN’T LOOK ANY BETTER THE SECOND TIME

Romney’s campaign manager said that his candidate would change his right-wing positions for the fall campaign: “It’s almost like an Etch-A-Sketch. You can kind of shake it up and we start all over again.”

AND IF HE GOES WITH THEM, IT WILL ALL BE WORTH WHILE

Newt Gingrich proposed sending 13,000 Americans to the Moon and creating a new state there.

After Gabby Douglas became the first black woman to win the Olympic gold medal in all-around gymnastics, the news media reported on problems with her hair.

Justice Antonin Scalia, in defending his argument that sodomy is legally equivalent to murder, told law students at Princeton that the Constitution is not a living document, it’s “dead, dead, dead, dead.”

Kim Kardashian fell 90 places, to 98, on AskMen Magazine’s list of the worlds 100 most desirable women.

Romney said he’s “not concerned about the very poor.”

HE WAS PROBABLY SHITFACED, TOO, BUT SINCE HE DOESN’T DRINK HE CAN’T REMEMBER THAT EITHER

Romney said he didn’t remember beating up a gay student at his prep school and cutting off his long hair.

A full 78 percent of Americans thought Ryan Seacrest was doing a good job broadcasting from the Olympics, although most of them couldn’t figure out what he was actually doing.

HE ALSO TOLD US THAT TAX CUTS AND DEREGULATION WOULD IMPROVE THE ECONOMY, SO HE’S GOT A WINNING RECORD HERE

Karl Rove on election night kept insisting the Romney still had a chance to win.

TALK ABOUT A BLOWN COVER

David Petraus resigned as CIA director after an affair with a woman who was threatening another woman who might have had a thing for him.

A petition to allow every American to punch Grover Norquist in the dick was removed from the White House website.

WE’RE WITH THE GOVERNMENT OF BELIZE; THIS MAN IS “BONKERS”

One-time software mogul John McAfee fled Belize claiming the cops would persecute him after he was sought for questioning in the shooting death of his neighbor — using a body double, faking a heart attack, pretending he was crazy, and winding up in Miami.

Ann Romney was deeply depressed that her husband didn’t win the election, telling friends she though it was their fate to move into the White House.

AND WHEN ASKED IF SOMEONE THAT MORONIC COULD ACTUALLY RUN FOR PRESIDENT, HE SAID “I’M A REPUBLICAN, MAN”

Marco Rubio, when asked about the age of the Earth, said “I’m not a scientist, man.”

Vice-presidential candidate Paul Ryan lied about his time in the marathon.

GO AHEAD, CLINT — MAKE OUR DAY

Surprise guest speaker Clint Eastwood addressed GOP convention delegates for 12 minutes, during which he carried on an imagined dialogue with an empty chair he identified as President Obama.

AND YES, HE DID GET A FAIR AMOUNT OF THE STUPIDITY VOTE

Santorum told a gathering of conservatives in Washington, “We will never have the elite, smart people on our side.”