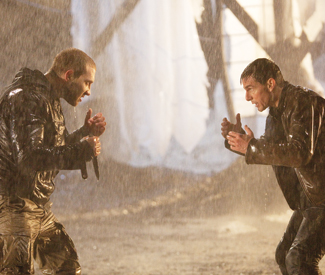 LIT/FILM The folding travel toothbrush is a central element in every Jack Reacher novel. It’s his only possession, the only thing the wandering ex-military cop takes with him when he throws away his old clothes and buys new ones, the only thing that ties him directly to his old life in the U.S. Army. It’s part of the Reacher formula, one that consistently works through 17 books by Lee Child.

It’s not in the Jack Reacher movie.

That was the first sign that one of the best trash-lit characters to come on the scene since John D. MacDonald invented Travis McGee hasn’t translated so well to the big screen. (McGee never did, either; the only McGee movies ever made were disasters, and MacDonald hated all of them.)

But the esoteric musings of McGee, on everything from Florida real-estate development to the demise of San Francisco, were the charm that held those modest plots together. Child, who has a background in television production, offers more action-packed stories with all the elements that ought to make a great movie.

Like MacDonald, though, Child goes a bit deeper than the traditional trashy thriller writer. His books have themes of violence and redemption, of freedom and responsibility, of wanderlust and homesickness that can’t just be shoehorned into a fast-paced screenplay with Tom Cruise. This may not be Shakespearean literature, but it isn’t Mission Impossible, either.

To make it more challenging, there are long periods of silence in the Reacher book, and those don’t work will in today’s mainstream cinema — but without them, the pacing is all wrong.

I showed up at the movie ready to be let down. The diminutive and emotional Cruise seemed all wrong as the tall, taciturn Reacher; I was hoping for a more Daniel Craig approach. Child, on the other hand, was totally down with the casting, so I was ready to give it a shot. (Or, as the book title from whence this flick emerged put it, One Shot.)

The book is a classic of the Reacher oevre, with a tiny bit of 2007’s Shooter mixed in. There’s a former Army sniper named James Barr (Joseph Sikora) who gets charged with an apparently random killing spree; the evidence is overwhelming, the cops have him nailed, and the execution-mad district attorney tells him if he doesn’t confess, he’s going to get the death penalty.

Barr refuses to talk; he just takes a legal pad and writes “Get Jack Reacher.” Which turns out to be tricky; Reacher has no address, no credit cards, no car, no driver’s license … nothing to pin him down. He’s almost impossible to find.

But he shows up on his own — not to help save Barr but to tell the cops that the guy once murdered a bunch of civilian contractors in Iraq. Reacher had him nailed, but the Army, for political reasons, let the case go. He’s ready to send the guy to the chair, if he doesn’t kill him with his own hands first.

But then the DA’s daughter, Helen Rodin (Rosamund Pike), who is representing Barr, convinces Reacher to take another look, and together they discover a fiendish plot involving an 80-year-old mob capo from the old Soviet Gulag.

Nice movie plot. And the film version doesn’t take too many liberties with the general idea of the book.

But there’s no headbutting, which is Reacher’s trademark fighting technique. And he never has sex with the female protagonist, which is disappointing.

That and the fact that the movie’s about 20 minutes too long — and the car chase scene alone is about five minutes too long (and car chases are not part of the Reacher mix) and there’s an embarassing scene where Cruise takes his shirt off just so we can see him with his shirt off left me wondering: did Lee Child really sign off on this screenplay?

So that’s the bad news. The good news is that the film is entertaining, Cruise does the best he can under the circumstances, and he delivers the key lines nicely. Pike does a fine job of being sexy without being movie-star beautiful. The fight scenes are lively and fun and not too overdone.

And Werner Herzog is just spectacular as the evil Zec, a man so tough that he chewed his fingers off in prison to avoid getting gangrene. Watching Herzog sneer and be scary, horrible, and fascinating at the same time is worth the price of admission.