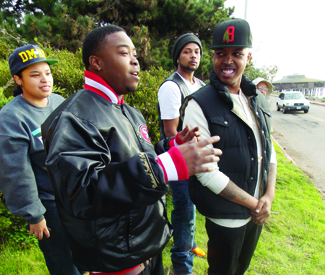 YEAR IN MUSIC I’m at the Marina in Berkeley with J-Stalin around noon, waiting for producer-rapper Droop E to arrive so he and J can shoot a video for his upcoming EP, Hungry & Humble. I was invited, not by Droop but by his “Pops,” Bay Area legend E-40, to do an interview for 40’s epic, two-album collaboration with Too Short, History (HeavyOnTheGrind/EMI, 2012).

“Shiiit, me and you go way back, patna,” 40 said the week before over the phone, recalling prior interviews. “I just gotta film a cameo then we’ll do it there.” But since scheduling the article, I haven’t been able to reach him, either directly or by publicist, so Stalin took pity on me and brought me along to the shoot.

“I’m going on tour with Trae tha Truth,” Stalin says, referring to the Houston rapper signed to T.I.’s Grand Hustle label. “He flew out here and Ghazi from Empire Distribution picked him up from the airport; when Trae got in the car, he was like, ‘Who is J-Stalin? I need to work with him.'”

That word of Stalin has spread to Houston is an encouraging sign in the usually bleak landscape of Bay Area rap, and couldn’t come at a better time as the West Oakland MC prepares his fourth “official” solo album, On Behalf of the Streets, Pt 2. Like J’s debut, OBOTS2 is produced entirely by the Mekanix; the difference six years later is Stalin’s now the second bestselling local rapper after E-40 — according to Rasputin Records — and the Mekanix are among the Bay’s hottest producers, working with everyone from 40 on down. In the absence of local radio or major label support, the stakes continue to increase for the author of Memoirs of a Curb Server (Livewire/Fontana, 2012) and the proprietors of The Chop Shop (ZooEnt, 2012).

The day stretches on, tedious yet fascinating. Droop E’s got a serious film crew here and armed security to boot; the only thing missing is a permit. And 40. Various rappers drift in and out, like Cousin Fik, latest star of DJ Fresh’s ongoing Tonite Show series, or Lil Blood and Boo Banga, who released a syrup-drenched duo disc Cream Soda and Actavis (Livewire) this year. A member of Stalin’s Livewire crew from Oakland’s Dogtown neighborhood, Blood’s prepping his own official debut, Meet the Driver and the Shooter, for February. He takes off his ski hat and shows off his scalp, revealing an entrance wound and an exit wound about an inch and a half apart. Everybody laughs, but they don’t think it’s funny. It’s a stark reminder of how little insulation there is between the industry and the street out here.

Between takes, I get in some questions with Droop E. Besides launching his own career, Droop has had a big hand in his dad’s, co-executive producing four volumes of Revenue Retrievin’ (2010-11) and three of Block Brochure (2012) for his HeavyOnTheGrind imprint of 40’s Sick Wid It Records. Yet the 24-year-old veteran — who, as a teen, was one of the architects of hyphy, along with Rick Rock, Traxamillion, and ShoNuff — lives up to his EP’s title.

“I’m a partner but I’m still a protégé,” he says. “I’m learning a lot, seeing my Pops get into a whole nother mode of beastin’ and just making our own sound.”

That sound, judging from Block Brochure and History, has grown suspiciously more hyphy lately, in the wake of Drake’s double platinum “The Motto,” an overt homage to the Bay Area music of half a decade ago.

“That ended up being beneficial,” Droop says, “because look at the sound now in the Bay and L.A. ‘The Motto’ opened it up again.”

Given the bizarre local backlash against hyphy beginning mid-2007 — forcing its originators to prematurely back away from the sound — this is a remarkably philosophical purchase. Reached by phone, Traxamillion agrees, as his own 2012 disc My Radio (SMC) finds him revisiting the implications of the sound.

“I’m not mad,” he says. “I felt like I had an influence on music on a national level.”

The next night, I’m in a Dublin club, where we’re not allowed to drink, because this is a movie. Sympathetic to my long wait, Droop E’s somehow procures me some Jameson’s and the tawny liquid immediately catches E-40’s eye. “Gable, what you got there?” Dressed in a black pinstriped suit, 40 has finally arrived for his cameo, a series of elaborate tracking shots of him pouring a shot and toasting. Finally, I manage to catch him in an unoccupied moment and remind him about the interview; can we tape a few questions? He fixes me with a look of contempt.

I feel the blood drain from my face. Then, with agonizing slowness, a smile begins to creep across his lips.

Delays are nothing new to the Vallejo MC; he and Too Short first began announcing History in the late ’90s while they were both on Jive, but Jive never let it happen.

“It was 10 years in the making, but it didn’t take 10 years to make,” 40 says. “God work in mysterious ways so now’s the perfect time because we get all the marbles. We superindependent. We got a distribution deal through EMI.”

40’s made the most of his new freedom, only releasing albums in pairs and trios since parting with Warner after The Ball Street Journal (2008). Where BSJ bore clear signs of corporate overthink, 40’s prolific post-Warner output makes it obvious that he does his best work with a free hand. At age 45, the rapper scored one of his biggest hits this year with Block Brochure‘s “Function,” which in turn has provided a convenient new label to replace the toxic term “hyphy.” History‘s two volumes are thus divided into Mob Music and Function Music.

“Function music is more club, party music,” 40 says. “The difference between function music and mob music, function is the feel of the new era; we’re covering two and a half to three decades of music. We been doing it since the mid-’80s and here it’s almost 2013. Some people wish they could have one hit; I have had many hits in my life.”

“There’s people who don’t like me but I’ve carved my name into the history books,” he concludes. “There’ll never be another E-40 ever because I’m too different. One thing about the Bay Area: we some trendsetters and we got haters and they talk about us but they duplicate us later.”