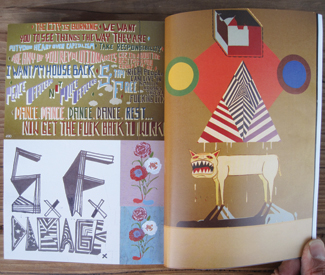 VISUAL ART It starts with the streets. Walls, the texture of walls, rough and colored in swirls of graffiti letters. Walls you feel you could reach out and touch their cold and grit. Establishing shots — the streets of San Francisco in the dot-com era. The photos are of their times: an unattended shopping cart in the streets appears as early as page three. Soon follows the spray-painted legend, “Don’t let the good times fool you.”

The pictures are inscrutable, their sequence seemingly random. Yet other than the gnomic title (Friendship Between Artists is an Equation of Love and Survival), the only text in Xara Thustra’s self-published new book’s 500 pages is a brief intro from the author insisting that the book is meant to be read from left to right, from top and bottom in the order the photos appear. There are no captions or prompts to lead the viewer. It is the mute gravity of the photos that pulls you in. What is happening here? It’s like finding a box of photos on a trash pile in the Mission — old furniture, clothes out on the curb, a pile of books and CDs. Why is all this stuff in the trash? Did the owners die? Or get evicted? Photos of strangers. You go from one photo to the next and the outline of a missing life starts to appear. What is happening here?

The action moves in and out of the streets, cinematic — the interiors dark, claustrophobic. The streets provide narration. Everything is spray painted. Demand Community Control. Everything bright, everything clean. Everything they build be like fuck you, fuck you, fuck you. Familiar everyday locations have become enlisted as battlegrounds. At the Dolores Park tennis courts, someone has hung a screen on the fence, painted so that it reads “Sink the Ship” in shimmery, see-through letters. A subliminal message to the tennis players visible on the other side? Or a secret signal to an unseen underground army?

Cut to the interior. Some dim locations start to become recognizable: a performance crammed into a corner of Adobe Books, a crowd seen through a doorway at the old Needles and Pens. The images are at times grainy and low res, like bad cell phone photos or surveillance camera footage. Much is shot in indistinct rooms or hallways, tightly cropped. The people in the interiors model homemade clothing or stare back at us from unmade beds. They are dancing in high heels or fucking each other, holding whips and dildos. No one is smiling. Instead they stare defiantly into the camera as if to ask, “Who are you to watch? Which side are you on?” This is not the careless and fashionable hedonism of Ryan McGinley photos. Instead, like the subjects of Nan Goldin photos, the people in these images know how much their search for freedom costs, and who will have to pay.

Meanwhile, the battle in the streets continues. Scum bags dressed as imposter yuppies stand in front of the mall on Market Street, holding handmade signs reading, “The bombs are dropping, lets go shopping!” An effigy of Gavin Newsom burns at 18th and Castro. Back inside, homeless guys from Fifth and Market calmly eat free breakfast at the 949 Market Squat. More drab interiors, more surveillance footage, and then what is happening here? Scenes of naked people grimly carving designs into each other with razors, holding dripping, bleeding arms up to the camera. It must be 2005, I think, when we all started to give up on ever stopping the war and just started hurting each other.

Full disclosure: I am in this book. I might be too close to the people and events depicted to discern whether the images are strictly documentary or whether their arrangement is intended to create a new story. But the juxtapositions, eerie and dreamlike, pack a wallop. In one two page spread, my dead friend, Pete Lum, stairs from the left page into another photograph on the right of an unknown drag queen out front of Aunt Charlie’s on Turk Street. Their eyes seem to meet across the gutter of the book and across time and space, as if sharing a secret the rest of us cannot know.

Ultimately, perhaps the one indisputable narrative of the book is the tremendous progression in Xara Thustra’s artwork, as the early agitprop graffiti by “Heart 101” in support of street protests slowly morphs into a far more ambitious project, an ongoing collaboration with countless others through performance, print, and cinema to abandon protest and instead collectively embody through art the autonomy and ethics of a truly different world. Perhaps inevitably then, Friendship Between Artists is both a monumental achievement and something of an anti-climax. The protests, the willful art world obscurity, the dead friends — what did it all add up to?

I am certain, anyway, that nothing in the book was conceived with the idea that it would one day appear in an art book. Instead, the interventions, experiments, and protests detailed herein, while at times quite joyous, were, as the book’s title suggests, originally part of a deadly serious struggle to keep oppositional culture alive in San Francisco, and for many that struggle now feels lost. But life must go on, and this is no museum piece.

The book’s 500 pages positively overflow with life, salvaging from oblivion the raw, visceral feel of 15 years of ephemeral underground freedom. While some will be haunted by the suspicion that the answer to the above question is “not enough,” the people in these photos stare into the camera and demand we consider instead a hard-earned and far more redemptive possibility: that this isn’t an art project, it’s how we live. This isn’t representation of a different reality, but about being a different reality. And fuck you, anyway, because being free is its own reward.