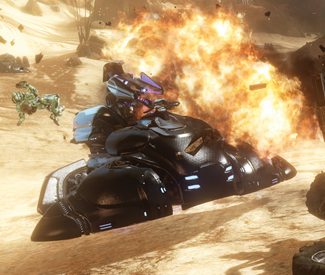 GAMER They say you have to go away in order to make a comeback. To be fair, the Halo series never really “went away,” having released two non-numbered titles and an HD remake in the four years since Halo 3, but those entries lacked the presence of the iconic Master Chief and, compared with the pop-culture phenomenon that was Halo 3, they didn’t exactly set the gaming community on fire.

Perhaps fearful of diminishing returns, series creator Bungie left the franchise in 2010 and Halo 4 (343 Industries/Microsoft; Xbox 360) was left to a new developer, 343 Industries. I’m not sure anyone expected the first-time company to knock it out of the park on their first try, but Halo 4 is a unmistakable grand slam — both a love letter to the franchise’s legacy and a re-introduction to a beloved character that once appeared as fundamentally one-note.

Fittingly, Halo 4 picks up four years after the events of Halo 3. Master Chief is awakened from cryo-sleep by sidekick computer A.I. Cortana and, fearing an attack from villainous alien race the Covenant, the pair set off on a quest that once again endangers Earth and the future of humanity. The first entry in a new trilogy of games, Halo 4‘s story favors mystery over the hollow exposition of past titles, and the relationship between Master Chief and Cortana suggests a truer sense of humanity for the man behind the mask.

Pacing is also revamped, and the game is always barreling towards something new and exciting, as players shuffle from spaceship to alien planet and back again, on the run from a new alien-machine hybrid race called Prometheans. Even when you’re required to perform the same action multiple times, mundane acts like flipping switches rarely play out the same way twice thanks to some impressive artificial intelligence and smart level design. Frankly, it’s surprising that the trusty Halo formula can still be put to such joyous effect; the single player campaign is the most satisfying since the series debuted in 2001.

If you’ve played the multiplayer of the past few entries, you’re largely prepared for the wealth of intuitive maps and game types, solid matchmaking, level editor and ability to save and edit videos of your online escapades. You have new armor and a few new special abilities — like a portable turret — but game play remains easy to learn and challenging to master.

In a field where conventional military shooters top the list each month, it’s exciting to have an invincible space marine blasting up the charts again. After years of releasing games that were essentially two sides of the same space-coin, Halo 4 takes the series back to basics: Master Chief and a whole lot of firepower. Everybody loves a comeback.