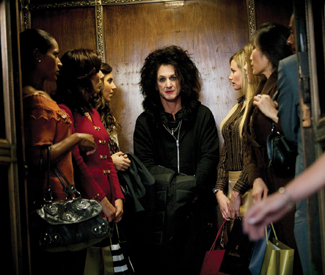 FILM It is a rare but often hugely enlightening thing to know just how and why a particular movie got made, especially when the answer is something more complicated than “to make money.” In the case of This Must Be the Place, Sean Penn apparently saw Paolo Sorrentino’s third feature, 2008’s Il divo — a whirlwind dramatization of pint-sized lifelong Italian politician Giulio Andreotti’s rather contemptible career, during which he was suspected of nearly every possible corruption — and admired it very much, a reasonable response. He let the director know he would he interested in future collaboration. Sorrentino saw an opportunity not only to work with an Oscar-winning actor but also to make his English-language debut, so he set about writing a script. He had also wanted to make a movie about the hunt for surviving Nazi war criminals. Two birds, one stone, all very reasonable.

What resulted, though, is pretty unreasonable on any level, such that it might as well be called Cart: The Horse Movie for the way in which Penn’s role has been allowed (conceptually even more than in performance) to completely overshadow and even render somewhat irrelevant the whole hunting-Nazi-war-criminals angle. And because hunting Nazi war criminals is not something anyone in their right mind would use as a climactic yet ultimately disposable mere plot device for a quirky seriocomic road movie, This Must Be the Place becomes a movie whose perversity is sorta benign yet near-complete. Only making things weirder is the fact that it’s not the debacle you might expect as a result, but something not-bad — not quite good, but still.

Penn plays Cheyenne, a 1980s American rock star who apparently hasn’t performed or otherwise been in the spotlight for 20 years. He trundles around his mansion in Dublin — why, indeed, Dublin? did the high taxes appeal? or was filming there cheap? — doing practically nothing, occasionally taking a wheelie cart into town to go shopping and be stared at. And stare they do, not only because he’s famous but because he looks completely ridiculous: a middle-aged man in floppy black clothes, pancake makeup, lipstick and mascara, topped by a vast fright wig of ratted black hair. (He looks like Robert Smith of the Cure with even more of a drag angle.) His voice is a frail, high breathy thing that seems to apologize for itself save when it occasionally erupts in a loud but quickly doused rage. He is as mincy and peculiar and masochistically odd as Quentin Crisp, without being gay — he even has a wife (Frances McDormand), though she seems more a kind of paid best pal than anything else.

Cheyenne shows he’s good-hearted under all that gook by clumsily trying to get two youths of his acquaintance (Eve Hewson, Sam Keely) together, and worrying about a haunted woman (Olwen Fouere) who spends all day staring out her window, waiting for someone who may never return. This latter business remains pretty obscure, though it may have something to do with the “depressed songs for depressed kids” he once wrote, and which were actually cited as inspiration by a few suicidally depressed teens.

Though we’ve no indication he was ever anything else, Cheyenne now recognizes that he himself is perhaps “a tad” depressed. “There are too many things I don’t do anymore,” he says. One of them is flying, though he has to take that up again after 30 years in order to attend the New York funeral of the father he’d been estranged from for at least that long. It is there, amid many Orthodox Jewish relations, he discovers his late concentration-camp survivor dad had unfinished business with an Auschwitz “tormentor.” American heartland, here comes the world’s most conspicuous amateur investigator.

En route he meets an assortment of types played by Judd Hirsch, Kerry Condon, Harry Dean Stanton, Joyce Van Patten, and David Byrne as David Byrne. Place recalls in some respects the strained, condescendingly quirky Americana Exotica representation of Byrne’s only directorial feature, 1986’s True Stories. It, too, is one big private art project, with gratuitous “surreal” moments that Sorrentino’s undeniable skill as a filmmaker (and Luca Bigazzi’s as his inventive cinematographer) somehow render less sore-thumb inorganic than they ought to be.

But why are we watching this character, in this scenario? Both grab attention, but they never really connect. You could explain the irrelevancy and at least partial injustice in the ancient Nazi quarry’s final appearance if this movie turned out to be about forgiveness rather than vengeance — but then it isn’t really about either. In the end Penn’s character goes through a transformation that works as a final visual grace note, but doesn’t make any deeper sense given a couple seconds’ thought. Was being Cheyenne just a phase our hero had to go through? For 35 years or so?

This Must Be the Place is also an inexplicable digression, all the more so for costing 28 million dollars it will never remotely make back. Penn and Sorrentino bring all their considerable dedication to it, but wandering lost between poignance and oddity, their movie never locates the “home” of the titular Talking Heads song. It’s a deluxe but strange, pointless vacation they didn’t need to go on, let alone share.

THIS MUST BE THE PLACE opens Fri/9 in Bay Area theaters.