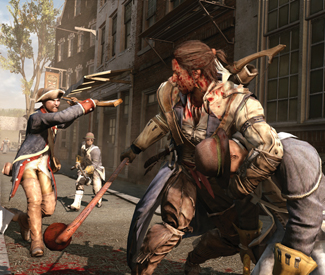 GAMER Assassin’s Creed III spans decades, from the earliest seeds of the American Revolution and on through some of the most notable events of the war, like the Boston Tea Party and Paul Revere’s midnight ride. Such momentous happenings act as backdrops in a story chronicling the life of Connor, a half-Native American and assassin in a secret society dedicated to upholding the tenets of free will. It’s a lofty premise, and one the Assassin’s Creed franchise has rightly earned with a successful run of past games that combine science fiction, history lessons and parkour neck stabbing. And AC III mostly delivers.

AC III is a true sequel, not a cash grab or copy-and-paste of AC II, behavior that many gamers have accused developer Ubisoft of committing with their non-numbered sequels Brotherhood and Revelations. Attention to historical accuracy of the layouts of colonial Boston and New York is impressive, the new free-running through trees is fluid and natural, and, once you get into the real battles, you encounter a surprising number of on-screen characters. Purely on a performance level, AC III is a big step up for the series, but the epic scope means players aren’t allowed to jump into the fray right away; it’ll likely be hours before you get to play as the guy on the front of the box. If you can go with the flow, you’ll find it’s one of a number of interesting risks the Creed franchise is taking with its latest installment.

Following the introduction, a bold narrative feint that introduces players to the most loathsome villain in the series thus far, players are drawn through wilderness and battleground on the hunt for revenge. Compared to Ezio Auditore, protagonist of the past few Creed games, Connor lacks charisma and acts with a clichéd sense of nobility that, in the face of the Revolution’s complex matters, seems to make him too simple a character. Greater emphasis on non-player characters has the simultaneous effects of giving the campaign a grander scope than ever before and causing you to feel less like the protagonist than a supporting participant in others’ stories.

Previous Creed games maintained an appealing balance between offering campaign missions with linear tasks and providing players with a true opportunity for exploration and discovery by allowing them to tour these lost cities on their own. Ironically, AC III’s grand outlook leaves little wiggle room for true freedom, and those accustomed to spending hours dilly-dallying between missions are likely to be disappointed that few sequences allow them to deviate from the mission at hand.

It’s not all bad, and sometimes a guiding force is good to have in a game this large. AC III offers so much content that you can confidently anticipate playing it until next year. Hunting animals, collecting Ben Franklin’s almanac pages, creating useful items, naval battling, assassinating naughty citizens, liberating areas of town — there’s more stuff to do than ever before, and it’s rare that you’re forced to do anything outside of the main narrative that you don’t enjoy.

As the conclusion to a five-game story arc, AC III carries a lot of narrative baggage, and the bold moves taken in telling Connor’s story will likely limit the broader appeal that curious new fans hoped for. But, in a game this large, maybe you don’t care why you are assassinating redcoats, only that you can do so with consistent flair. Finding the formula for a successful video game is tricky these days, and many developers fear the risks of continuing to innovate once they’ve found a proven recipe. The risks taken here lead to both successes and failures, but kudos to Ubisoft for not being afraid to try new things.

With another all-new protagonist in debutante and secret assassin Aveline de Grandpré, Assassin’s Creed III: Liberation is set within the same time period as Assassin’s Creed III, but in New Orleans. Moving play from AC III to the PlayStation Vita exclusive, the technical downgrade is difficult to overlook, but Liberation is no less ambitious and laudably attempts to stuff most of what makes the console series work into a handheld experience.

Fitting all that content leaves little room for story, and Liberation drops the science fiction angle for a straightforward re-enactment of a series of important moments in Aveline’s life. Orphaned and brought into the Assassin order at a young age, Aveline is capable of selecting among different “personas” in order to disguise herself, at times as a slave, at other times as a high-class lady. The lady disguise is likely to be a stickler in many a Creed fans’ craw, as the dress restricts the character’s ability to climb buildings or fight, leaving Aveline with the less appealing abilities of charming men and infiltrating restricted areas. Without a deeper story, the Liberation package feels slight at times, but having a little Assassin’s Creed in your hands is impressive, and the venue change allows Ubisoft to prove its formula works outside of the original narrative.