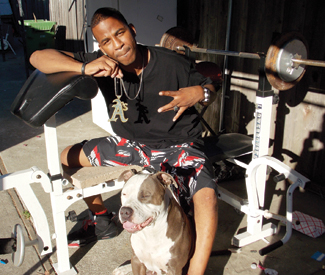 MUSIC “When I was growing up, bootsy wasn’t in,” Deev Da Greed says. “I wish I was rappin’ when Seagram [1969-1996] was alive, when Rappin’ Ron and the Dangerous Crew were shining. There were a handful of real rappers back then and if you tried to fake it you were blown out the water.”

I feel him. Being a Bay Area rap critic is heartbreaking. I have nothing for or against Kreayshawn, but it kills me she’s the only Oakland rapper on a major label. Lil B gets the cover of Fader and Wire, but I can’t pretend to give a shit about Lil B when dudes like Husalah are around. Yet just when I’m ready to hang it up, something authentic emerges from the streets to renew my faith in hip-hop, and I find myself rolling with Deev through East Oakland’s notorious Murder Dubs (the 20s off International).

Deev himself hails from the equally infamous “Avenal” hood some forty blocks east, but we’re meeting his production crew—To-Da-T, a.k.a Sir Rich and Quinteis — to hear tracks from his new discs: Dem$Boyz (4TheStreets/RapBay), an eponymous group project with Jacka protégé Bo Strangles and Curcinado from Hittaz on tha Payroll that dropped in September, and GREED, his first solo album, slated for December.

The younger cousin of G-Stack, one-half of Oakland’s legendary Delinquents, Deev first entered the rap game to help Stack run his new label, 4TheStreets, after that pioneering group split in 2007. What began as a little trash talking on intros and outros soon turned into writing verses, as Deev formed a group called the HEEM Team with young label recruits Tay Peezy and Qoolceo, debuting, along with To-Da-T, on Stack’s Welcome to Purple City (4TheStreets, 2007).

“I didn’t really come to be an artist,” Deev says, “but once I tested the waters, the waters felt good.”

By the label’s second comp, Tha Color Purple (2007), Deev was clearly G-Stack’s breakout protégé, able to hold his own alongside old school vets like Askari X and new stars like Beeda Weeda on the Town anthem “Geast Oakland” with his elastic flow, switching effortlessly from rambling and conversational to rapid-fire gassing in mid-verse. By the fourth comp, Abraham Reekin (2008), Deev was sharing top billing with Stack, but was also in legal trouble.

“I caught a [parole] violation for sippin’ on some syrup,” Deev recalls. “They raided my house and found some guns. To get money in Oakland, you got to be a real dude because you can get shot for anything now. I don’t carry no gun thinking I’m gonna do nothing, I’m doing that shit because that’s what time it is.”

Rather than face the charge, Deev went on the run, moving to Atlanta with the HEEM Team and trying to establish an East Coast branch of 4TheStreets. Feeling homesick, the rest of the group soon returned to Oakland, leaving Deev on his own in the city that’s become known as Black Hollywood.

“Hip-hop out there is alive; the heartbeat is flowin’,” Deev says. “Like, going to get a burger, you see somebody famous. I bumped shoulders or shook hands with everybody. It was hella hard because all I had was group songs, and to do shows I couldn’t be doing one verse. I called To-Da-T and was like, ‘I’m gonna fly you guys out here so we can knock out some songs.’ I did like nine songs and we mixed and mastered them in five days. But then three or four months after that, I got knocked.”

Nabbed by the cops in Atlanta, Deev was extradited back to California for a 13-month stay in Pelican Bay.

“By the time I was free in May 2010, I had to adapt to how much shit had changed in Oakland,” Deev admits. “A lot happens in three or four years. So I had to dumb down my swag to act like these youngsters so I could get right and make them respect my mind.”

“I’ve been running these streets now for two years and I got my movement back active,” he concludes. “The streets are feeling me. They know what I’m about. I got no paperwork. I’m gonna do it right this time.”