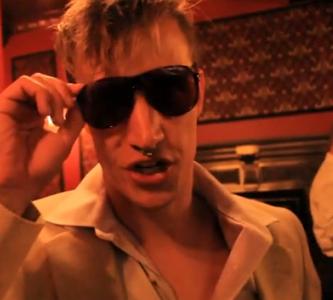 It was Saturday before Folsom Street Fair 2012, and I found myself standing in Kink.com’s recently-opened Armory Club, sipping on a well-crafted cocktail and waiting for people to arrive in the bar’s private backroom area.

As I gazed about the bondage scene portraits on the walls, I think of San Francisco’s history as an extremely open, sexually-progressive city. Only more recently have we seen the proliferation of a tech industry fueled by the Silicon Valley, the city’s high-functioning contado.

Given our epic confluence of sex and tech, it’s no wonder Monochrom’s Johannes Grenzfurthner created Arse Elektronika, a conference focusing on sex and technology that’s now in its fifth year of existence. This year’s theme of “Fucking Polygons, Fucking Pixels” underlay a focus on procedural representations of sex and gaming, with various speakers, seminars and performances taking part in the event.

“People actually do this?” asked a bar patron, who was hearing about Arse Elektronika for the first time. “You’re not from here, are you?” I said, chuckling a bit.