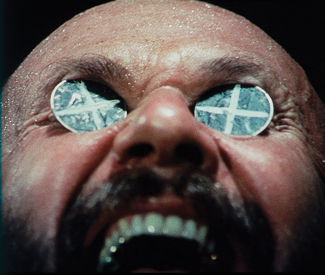 FILM Wake in Fright opens with a slow 360 degree pan across a dry, barren, isolated landscape. There are railroad tracks and two small structures, but the rest is filled with a whole lot of nothing.

This is Tiboonda, the tiny Australian town where Ted Kotcheff’s 1971 thriller begins. The descriptor “thriller” and the film’s title — not to mention its arrival in theaters under the genre-friendly Drafthouse Films banner — suggests that Wake in Fright is a horror movie, but if it’s Aussie Outback thrill-killing you seek, look elsewhere (starting with 2005’s Wolf Creek). Wake in Fright is more of a psychological thriller, of the escalating-dread-building-to-a-gut-ripping-climax variety. Not for nothing did chatty ol’ Martin Scorsese, a champion of the film since its 1971 Cannes debut, admit “It left me speechless.”

Pity poor teacher John Grant (Gary Bond), assigned to teach in Tiboonda’s one-room schoolhouse by the government he owes money to in return for his own education. Or don’t: Grant, primly dressed in coat and tie despite the scorching weather, can barely disguise his disgust over being plopped into such a backwater. When the six-week Christmas break rolls around, he’s on the first train out of town, heading for an overnight stop in mining town Bundanyabba before flying to Sydney, where cool waters and his sophisticated girlfriend await.

Of course, the best laid plans of desperate, sweaty men always go astray. Kotcheff — who is actually Canadian and whose best-known film is probably the first Rambo movie, 1982’s First Blood (or 1989’s Weekend at Bernie’s) — sets the tone early with that lonely 360 degree shot, but Grant’s misplacement becomes even more obvious once he starts encountering locals in “the Yabba.” Everyone, except for the odd woman working the front desk at his hotel (has anyone ever come so close to making out with an electric fan?), emits a strange combination of menacing and friendly.

First, there’s the cop (Chips Rafferty) who, five seconds after meeting him in the town’s raucous meeting hall, simply insists that Grant chug multiple beers with him. Boozing leads to a back-room gambling game — where, again, everybody acts like it’s no big deal that there’s an outsider, “the guy in the jacket,” in their midst. “One mere spin and you’re out of it,” reflects an oily man (Donald Pleasence) Grant meets in the chaos. Prescient words: when an unlucky coin toss means Grant’s lost all his money, he’s not only out of the game — he’s out of his Sydney trip, out of any other options, and on his way to going out of his mind.

But he doesn’t get there alone, and Wake in Fright amps up as Grant’s downward spiral begins. There’s beer — gallons and gallons of the stuff — off-roading at breakneck speeds, fistfights, further strange encounters with Pleasence’s character (who turns out to be the unabashedly alcoholic town doctor), and a grim-faced beauty (Sylvia Kay, married to Kotcheff at the time) who is not as out of place in the sticks as Grant first assumes. The film’s most brutal sequence involves kangaroo hunting — it’s so disturbing that it warrants a disclaimer as the end credits roll. But really, all of Wake in Fright is a nasty, grimy, hopeless misadventure, an exposing of the dark heart Grant didn’t realize he had, or was even capable of having. “I got involved,” is all he can say of the experience, though the audience might lean more toward “Uh, what the fuck just happened?”

Wake in Fright‘s return to theaters (and first-ever uncut appearance on US screens) after 41 years is the result of a negative-saved-at-the-last-minute miracle — the sort of tale that makes cinephiles both happy and nervous, wondering about all those films that didn’t get rescued before they went into the shredder. Anyway, be glad Wake in Fright is still with us; it competed at Cannes in 1971, and played there again in 2009 as a “Cannes Classic.” If you didn’t catch it at the 2010 San Francisco International Film Festival, here’s your chance to be freaked out by this newly-available classic.

ALL OUT OF BUBBLEGUM

Horror fans will recognize the name of Wake in Fright star Donald Pleasence from John Carpenter’s 1978 Halloween — ’tis the season, after all, and that film happens to be screening at the Balboa Theatre Oct. 30-31. But the Carpenter movie du jour is 1988’s dystopian-future drama/true story They Live, which comes out on Blu-ray Nov. 6 — never before has Rowdy Piper’s mullet looked so crisply feathered, nor Meg Foster’s eyes so eerily seafoam, nor the black-and-white matte paintings depicting Los Angeles’ subliminally-enhanced landscape (“MARRY AND REPRODUCE”) so stark and startling.

There are some recycled extras, including Carpenter and Piper’s audio commentary, trailers, and a vintage press-kit reel featuring wrestling superstar Piper reflecting on his leading-man debut (“Ain’t a lot of difference between John Nada and Roddy Piper”). But there’s new stuff, too: separate interviews with Foster, Carpenter (who scoffs when he’s asked if he was tempted to edit down the film’s epic, legendary fight scene: “Fuck no!”), and co-star Keith David, who hilariously reminisces how he had to un-learn stage diction when he was hired for his first Carpenter film, 1982’s The Thing — and devotees of that film will want to rewind multiple times, just to hear David jokingly enunciate “You believe any of this voodoo bullshit, Blair?” in near-Shakespearean tones.

For behind-the-scenes junkies, there’s a featurette on the film’s “sights and sounds,” highlighted by an interview with veteran stunt coordinator Jeff Imada, who breaks down that iconic fight scene and reveals he played most of the aliens in the film (including the “What’s wrong, baby?” guy at the end). Just about the only thing missing from this Blu-ray package (kudos for the ridiculous cover art, Shout! Factory)? A pair of sunglasses.