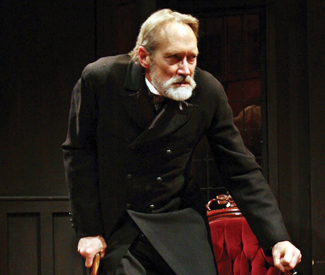 THEATER With the exception of an occasional Miss Julie, the plays of August Strindberg (and there are more than 60 of them) rarely find productions anymore. Yet the iconoclastic and prolific Swedish writer’s influence on modern drama — including such American playwrights as Eugene O’Neill, Tennessee Williams, and Edward Albee — is considered a given. This year marks 100 years since Strindberg’s death, and San Francisco’s Cutting Ball Theater has gone all out in satisfying a yen for a centennial embrace of this monumental (and definitely temperamental) artist who helped define the terms and concerns of modernism.

Capping a year of readings and discussions of the work and the man, Cutting Ball last week began an audacious program of five late “chamber plays,” to run in repertory through November 18. The project includes five new translations by Yale professor (and former American Conservatory Theater dramaturg) Paul Walsh, and the simultaneous publication of all five in a single volume by Exit Press.

Last week, The Ghost Sonata (1908) began stalking the stage of the Exit on Taylor as the opening gambit in Cutting Ball’s Strindberg Cycle. Its original premiere took place on a stage not too unlike this one, as artistic director Rob Melrose explains in a program note, being written (along with the other plays in the Cycle: Storm, Burned House, The Pelican, and The Black Glove) especially for the opening of Strindberg’s new Intimate Theater in Stockholm. This makes the chamber plays an especially apt choice for Cutting Ball’s stage. A pioneer of the chamber play form, Strindberg meant to foster an immersive experience for his audience with these deeply strange, poetical, dreamlike little plays he modeled on chamber music. The emphasis was thus on coziness, small casts in small houses, without the need for elaborate mise-en-scène. Moreover, a level of invention would dominate in these plays in which form would follow theme, rather than the other way around.

The Ghost Sonata is perhaps the best-known example among the playwright’s chamber works. It concerns a heroic and ambitious young poet named Arkenholz (Carl Holvick-Thomas) who, after saving some people from a burning building, finds himself seduced into the good graces of a fancy upper-class household of an aristo Colonel (Robert Parsons) by the machinations of a mysterious wheelchair-bound old man, Director Hummel (the formidable James Carpenter).

Hummel’s real motives become clearer as the play progresses through three short acts (the entire play runs only about 80 minutes without intermission). But the unfolding of all is like a dream, wherein Arkenholz confers unwittingly with the ghost of a Milkmaid (Ponder Goddard) that Hummel can’t see; pines for the beautiful girl (Caitlyn Louchard) in the fancy apartment building, confined to a sweet-smelling Hyacinth Room; and eventually finds his way into the social circle of the girl’s family, stunned old richies who are variously mad, morose, and generally not what they seem.

There’s an almost hilarious amount of exposition packed into the plot and its several reversals and revelations. But the chamber plays are works of a new era, and for a new era, and The Ghost Sonata — not unlike the naturalistic drama Ghosts by Strindberg’s hated contemporary and countryman Henrik Ibsen — seeks to cast a coruscating light on an older generation and its world, to expose and ridicule its corruption, bemoan its stultifying influence on the young, and generally bleed it out like a pus-filled old sore. As darkly shadowed as The Ghost Sonata is, its formal invention is full of air and light to remake the stage and the age.

That doesn’t mean it’s triumphal, or terribly optimistic. The uncertainties, ambiguities, and pitfalls of patrimony, a deep theme for Strindberg, snake through the surreal story like fissures in a crumbling wall. The Ghost Sonata has a quiet anguish running throughout — even in its touch of sardonic humor, as exemplified by the haughty butler, Bengtsson (played a little too broadly by David Sinaiko) — and it rages under all the delicate and sinister weirdness of its setting and action.

This trembling, contorted energy becomes incarnate, and altogether palpable, in Carpenter’s finely hewn and sensitive performance as Hummel, who even as a central demonic force is ultimately pathetic and even pitiable when his own reversal of fortune finally lands.

Carpenter is the best thing about this uneven if worthwhile production. If the play’s historical influence is one thing, its life on the stage is another, at least here. It does look very striking in the meticulous and persuasive design work of Michael Locher (set), York Kennedy (lighting), and Anna Oliver (costumes). The production also features a pervasive, ethereal score and soundscape by longtime Cutting Ball artistic associate Cliff Caruthers. The stage may be small, for instance, but Locher expertly creates a sense of a marble-cool expanse in which the play’s public street and inner chambers are seamlessly, miraculously evoked. A set of mobile dark-wood closets form a central edifice, first the outside wall of the apartment and then its inner parlor, with graceful economy. Oliver’s fine period costuming adds luxuriously to the dreamy world of the play, as does the vaguely macabre makeup on several characters.

Melrose, moreover, who helms each of the plays in the cycle, has assembled a strong cast, several of whom must carry the play with little or no dialogue and only minute gestures. But while individual performances show flashes of depth and charm, his actors rarely connect forcefully or convincingly. The ensemble may cohere further as the production continues in repertory. But it was plain enough on opening night that this vital element of so intimate and intense a play as this hovers somewhere just out of reach. *