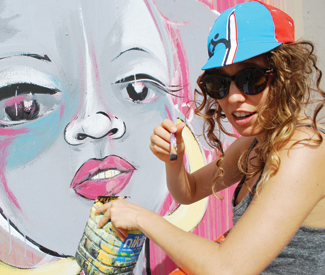 It may have been the moment of my recent trip to check out San Juan’s first street art festival.

Artist Sofia Maldonado was teaching no less than four high school females how to properly shade the middle fingers extending from two painted yellow fists. Lunchtime traffic whizzes past Maldonado’s mural in San Juan’s Santurce neighborhood, site of the 12-plus walls that would be painted as part of the week-long Los Muros Hablan. Small, wandering packs of street art fans stopped by intermittently, snapping photos, talking among themselves.

The 28-year old Maldonado’s mural is pretty dreamy for anyone overdosed on commercial, overly-testosteroned street art. It addresses domestic violence in Puerto Rico, showing a bashed-but-not-beaten beauty and those fists, which — once properly shaded — were lettered with “basta ya/enough already.” The work’s not soft, despite the bright colors she used to paint it.

Days earlier, when the moderator at a panel discussion at San Juan’s contemporary art museum that was part of the Los Muros Hablan programming asked the all-male panel of artists (Maldonado was south, painting a commission in the town of Ponce) to weigh in on female muralists, one responded that he was in favor. “They’re sexy,” he said, to a hearty laugh from the audience.

The domestic violence mural wasn’t the greatest piece of artwork that was created in San Juan that week. But then, Maldonado had a different intention than many of her male peers at Los Muros Hablan.

“Nowadays, I feel like doing murals is how to give back to the community.” It’s the afternoon and Maldonado and I are eating at a cafe a few blocks from her wall. “Especially for girls in Puerto Rico, it’s important to have a strong female representation.”

Maldonado grew up in San Juan, going to the same art school down the street that her eager assistants attend. She started painting walls with brushes when, inspired by the vivid street art on walls in France and Spain, she tired of the dull color palette available in aerosol on the island. She rolled with the boys, mainly. A few of them, from her San Juan crew, are painting alongside her at Los Muros Hablan.

After high school, she moved to New York City, got her MFA, found artistic success inside the studio too. She’s on the board of Cre8tive YouTH*nk, an organization that facilitates art projects that encourage critical thinking in at-risk youth. The week after Puerto Rico, she was at the Bronx Museum, doing a mural with the help of New York kids.

She’s the only female who had a wall at the festival. She’s also the only artist whose work is currently taking up an entire floor at the contemporary art museum. “She’s one of the best-known women these days, not only in urban art, but in visual art in Puerto Rico,” said Elizabeth Barreto, another San Juan street artist who painted in Los Muros Hablan’s all-female live painting and DJ event.

Along the museum’s open-air hallways, Maldonado’s controversial renderings of bra-less, heavily accessorized women of color are displayed. Google search “Sofia Maldonado 42nd Street mural” for the blowback she incurred when she erected them in Times Square. Maldonado tells me that the hurt the figures dredged up among people of color says more than the piece itself.

Her new canvas work also bears the language of graffiti, the strokes, the characters. But as a medium — her work’s not really about “getting up” anymore. She hasn’t rejected the bold artistic mark that you have to have if you paint in the streets, but you get a sense that Maldonado knows that audacity’s a tool, a microphone you use, not an end in itself.

She won’t really stand for all my editorializing. Actually, she kind of wanted me to shut up about her being a female role model. Her feminism is hard to describe in a 745-word article.

“You have to know it’s a male’s world, like any other profession,” she tells me, shrugging off all my questions about her take on the street art gender divide. “You gotta be strong.”

But one can’t help but read into her focus when it comes to education. “I don’t feel like I’m representing,” she concludes. “But I do feel like I need to set an example.”