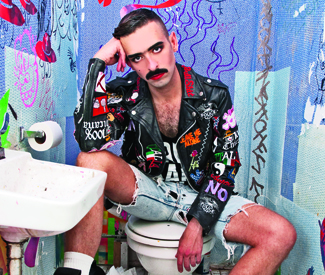 TOFU AND WHISKEY While I don’t miss living in Long Beach, Calif. too much (save for some particular pals and the endless flat biking roads), I do sorely yearn for the yearly costumed Halloween performance — at steak restaurant/dive bar the Prospector — of the Shitfits, a Misfits cover band made up of local musicians. Luckily, in San Francisco, there are numerous bands-costumed-as-other-bands shows in late October, including at least one Misfits tribute: Astrozombies, a full-time tribute act, which will do the horror-punk legends right at Hemlock Tavern (Oct. 31, 8:30pm, $7. 1131 Polk, SF; www.hemlocktavern.com).

“The band was essentially formed to be a Halloween act,” Astrozombies’ vocalist-guitarist Kevin Amann, a.ka. Doyle Vonn Danzig, tells me.

Because what is Halloween without a Danzig-alike howling “Hallow-e-e-e-e-en?” Prefaced by, “Bonfires burning bright/Pumpkin faces in the night/I remember Halloween.” Doesn’t that make you itchy to slick down your devil-lock, and paint your face like the quintessential skull?

I ask Amann if his band’s Misfits (and some Danzig/Samhain) repertoire is constraining, and he says, nope: “I think, because there is some pretty serious diversity within the Misfits catalog, it really doesn’t ever feel limiting. We can go from a lightening fast punk song like ‘Demonamania’ to a brooding slow tempo rock song like ‘London Dungeon’.”

An aside: The actual Misfits — or, their current incarnation, minus Danzig — are playing the Oakland Metro on Nov. 16, but that’s still a few weeks away.

Let’s get back to the Halloween tribute show in general. It’s often the peak of the year’s nights out, the pinnacle when one might revert to early show-going wonder and moshpittery. Everyone is feeling creepy, and the only true nerds are the kids who come in street clothes, or as something “ironic” or “thought-provoking.” This year, some friends and I hope to go out as Pussy Riot, as both a fun fashion choice, and in solidarity. Wait, is that thought-provoking? Well, my partner will be a bearded man in a hot dog suit, so it’s not all politics.

Then there’s the kind of once-a-year special mashup tribute night I was blathering on about above at Thee Parkside (Oct. 31, 8pm, $8. 1600 17th St., SF; www.theeparkside.com), with Glitter Wizard “Pushin’ Too Hard” as the Seeds, Twin Steps as the Cramps, Meat Market as G.G. and the Jabbers, and excellent new local bluegrass band the Parmesans as the Kinks.

Coachwhips of course being John Dwyer’s pre-Thee Oh Sees noise punk outfit. One of the reunion nights (Sat/27 at Verdi Club) is totally sold out, and you’re bummed because there’s going to be a haunted house inside the venue. I’m stoked because that’s where I’ll be Pussy Riot-ing.

The other (Sun/28, 7pm, $12. Lobot Gallery, 1800 Campbell, Oak.) espouses another epic blend of Total Trash and totally touring bands: the aforementioned Coachwhips, Pangea, Fidlar, Guantanamo Baywatch, and White Mystery. I can only imagine all the blood-soaked costumes and sweaty brows.

You can find tons more freak shows in the Halloween concerts and parties guide elsewhere in this issue. But for an entirely different kind of year-round showmanship (holidays be damned), there’s SSION, performing with House of Ladosha and DJs from High Fantasy at this freaky-colorful installment of Future | Perfect at Public Works (Thu/25, 9pm, $10-$15. Public Works, 161 Erie, SF; www.publicsf.com).

SSION, pronounced “shun,” is hard to take your eyes off of, a confetti-puke electro-art-pop party collective from Kansas City, Missouri, led sultry androgynous vocalist Cody Critcheloe, who now resides in Brooklyn, with the aesthetic of early John Waters oeuvre meets Pee-wee’s Playhouse. While the recorded music is often relegated to pre-party pump-ups, live is where SSION really shines, as some may have witnessed at DNA Lounge’s Blow Up night earlier this year.

The people were weary at first of Seattle’s Crypts, a synth-based (specifically a rewired CR-8000) darkwave electro act led by Steve Snere. For Snere was already known and beloved as a former member of Kill Sadie and post-hardcore geniuses These Arms are Snakes, in an angular realm of post-punk proficiency. But Crypts is enticing in a new, much gloomier fashion, and yes, Snere still kills it, and it maintains a paranoid frenzy vibe. Check deep, dark, and ghoulish “Breathe,” off the band’s self-titled debut LP (Sargent House, Sept. 4). The band played SF this summer, but this time it’s much closer to Halloween, plus they’re opening for Omar Rodríguez-López, of At the Drive-In and Mars Volta fame.

If you had told me 15 years ago that I’d be almost 30 and still recommending Converge, I’d of called you a liar or a time jumping cheat. And yet, after a forceful return listen, suggested by a fellow music nerd, I too must admit it: new record All We Love We Leave Behind (Epitaph Records, Oct. 9) is the thinking person’s heavy metal album. It’s still the blistering axes of hardcore and heavy metal, with melodic guitar riffs, rapid-fire drums, and pained chants, but with a more grown up, complex sensibility — or maybe that’s just me?

And then there’s Hunx, or H.U.N.X., of Hunx and His Punx. In the past few weeks, Seth Bogart released an insta-classic Halloween music video for his track “I Vant to Suck Your Cock” — full of gothy late night cable access details, sexy vampires, lime-green wigs, and tombstone booty thumping — and announced both a new variety show, Hollywood Nailz, and his own record label, Wacky Wacko Records, which is releasing “I Vant to Suck Your Cock” as a single. According to the release, the label will be “an outlet to release novelty records, children’s music, holiday themed hits, songs from…Hollywood Nailz, and other bizarre things that most labels wouldn’t bother with.” Bogart is currently living in LA (as his variety show moniker would suggest) but still visits his store in the Bay, Down at Lulu’s, often. He’s doesn’t have any local shows booked as of press time, but he knows we vant to see him.