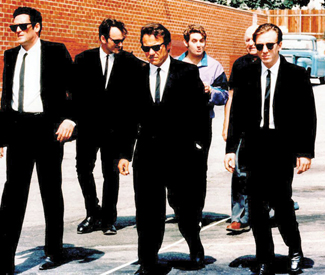 FILM It is one of those hard truths one must learn to live with: Quentin Tarantino will always have seen more obscure exploitation movies than you. His new Django Unchained will arrive just in time for Christmas like a gift wrapped severed limb, leaving dedicated fanboy/fangirl types just weeks yet to immerse themselves in the world of spaghetti westerns to which it pays homage.

That makes two features in a row he’s made inspired by 1960s and 70s Euro trash cinema, following 2009’s Inglourious Basterds, which tipped hat to the era’s myriad international-coproduction war flicks. If you saw the obscure 1978 Italian film that was based on (and named after), you also probably already know who and what a Django is, how to pronounce him, and maybe even the factoid that countless (seriously, no one knows how many) ersatz Django “sequels” were made to cash in on the 1966 original’s success.

If not, join the more innocent multitudes at the multiplex come December, many of whom will no doubt be asking for one ticket to “Duh-jango,” please. There’s no shame in knowing nothing about such cultural marginalia. But what even faintly hipster-identifying person would admit to not knowing everything there is to know — even being bored with that knowledge — behind Reservoir Dogs (1992), the now 20-year-old Citizen Kane of indie meta guy flicks? How many people can not only quote its every line, but quote the every line of at least a few amongst its own umpteen mostly lousy imitations (yep, that includes you, 1999’s Boondock Saints)?

In the gradual groundswell of attention that greeted Dogs back then, viewers confidently cited Tarantino’s inspirations (as did he himself), noting the imprint of everything from classic noir titles to Kurosawa. Yet one movie that had a very direct influence was almost completely absent from those discussions, failing to rise from its prior two decades of complete obscurity even in the two decades post-Dogs.

Together at last in one canine-throwdown double bill is Day of the Wolves, that forgotten 1971 thriller — thanks of course to the Roxie Cinema and Elliot Lavine, themselves reunited for the latest installment in “Not Necessarily Noir,” that catch-all occasional series encompassing all things cool and (mostly) celluloid which don’t fit the loose strictures of their long-running actual noir retrospectives. Wolves and Dogs tussle to kick off the two-week schedule this weekend.

Day of the Wolves‘ low profile is somewhat explicable: it was never released theatrically in the US, and for years withheld from legal exhibition due to copyright issues. Still, one marvels how such a flamboyant relic of pure Seventies-ness could have remained under the radar for so long. TV and Vegas comedian Jan Murray is improbably cast as the mastermind who orchestrates the assembly of six career criminals in a secret desert location. All strangers, they’re instructed to call one another only by assigned number, wear identical outfits, and sport full facial hair (some obviously glued-on). Their mission is to “hit a whole town and peel it like an orange” — sealing off a “model community” in the Southwest, emptying every till, then scramming via private plane.

It’s an ingenious plan that counts on the complacent vulnerability of such burgs. In fact, Wellerton’s city council has just demonstrated ideal small-mindedness by firing its police chief (late, SF-born Richard Egan, a second tier 1950s star gone to flab) for the crime of actually enforcing laws on some of its more irresponsible A-list citizens. Thus the population of 7,000 or so is woefully under prepared when they find the power cut off, exit routes blocked, and seven armed desperados in charge.

The early going bears closest resemblance to Reservoir Dogs, and is the most inspired. (Later when the film gets to its prolonged actual climax, it devolves into a more ordinary Western-style shoot-’em-up between the raiders and Egan’s cop-turned vigilante, though there’s a doozy of a final twist.) Writer-director Ferde Grofe Jr., whose career in features sprawled sparsely from the early 60s to the late 80s, demonstrates a real flair for memorable idiosyncrasy, if less so for action. In style and content, Wolves is a perfect time capsule: groovy rock score (with “acid” guitar, bongos, and flute), very wide lapels, and a dune buggy chase. This near-classic B movie will be shown in one mightily color-faded, “pinked-out” 35mm print, an ostensible flaw that plays more like a finishing touch.

Particularly worth checking out is Darker Than Amber, an attempt to launch a James Bond-style series featuring John D. MacDonald’s best-selling Florida sleuth Travis McGee. Unfortunately this 1970 maiden effort flopped, and the film has seldom been seen — especially without cuts — since. Admittedly it has pedestrian TV-style direction from Robert Clouse (who’d hit his sole career peak later with Bruce Lee’s 1973 Enter the Dragon), and the production values are just B-plus. But it’s an ideal vehicle for Rod Taylor, the brawny, wry, relaxed Aussie who should have been a huge star in the 60s and 70s, but despite a couple memorable films (1963’s The Birds, 1960’s The Time Machine) never got the right break. He’s surrounded by a memorable gallery of MacDonald characters, with two body-builder villains (William Smith, Robert Philips) in addition to the frequently shirtless star making this an notably homoerotic entry for the era in a macho action genre.