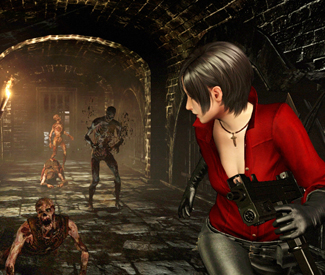 GAMER Capcom really wants you to like Resident Evil 6. The Japanese developer has been turning out entries since 1996 in the survival horror franchise that has spawned countless films, games, books, and theme park attractions, and with each success came an increase in fans. Resident Evil 6 suggests Capcom has listened to each and every one of its fans, and instead of using fan feedback to make an informed decision about what type of game players want, they simply shrugged and stuffed four games into one.

Resident Evil 6 offers four separate story campaigns, each designed to appeal to a different kind of player. For fans of the original games, fan favorite Leon Kennedy gets top billing in a campaign with a tense atmosphere and sense of exploration. Resident Evil 5‘s Chris Redfield heads a combat-heavy campaign focusing on action and gunplay. New character Jake Muller takes on a story that plays like a mixture of the first two, and the unlockable final campaign stars a bizarrely deracialized Ada Wong as she solves puzzles.

Booting up the Leon campaign reveals mechanics and pacing that are baffling. Levels are designed to be played with a partner, but there are moments when one player performs a task while the other stands around with nothing to do. Quicktime events exist solely to make players jam on the sticks and buttons at inopportune times and lead mostly to cheap deaths. Melee combat is so overpowered it makes more sense to kick zombies to death rather than waste ammunition lining up a shot from a pistol. And the game is relentless with explosions and breakneck action sequences.

The schizophrenic design decisions start to fall into place when you begin Chris’ war-shooter themed campaign. The focus on guns, overpowered melee moves, and arena levels are specifically designed to enhance an action experience but have been applied across the board to campaigns that don’t support the play style. Understandably, it’s impossible to change the fundamental design of each campaign without ballooning the developers’ budget, but my response to that would be not to make four different campaigns. Longtime fans of the series were never going to accept Resident Evil 6. It makes the controversially action-packed fifth entry look like Citizen Kane and it’s a far cry from the slow, solitary experiences that made the franchise a hit. But even separating the game from its baggage, the game stumbles in simple mechanics, pacing, and level design. When a single failed release can sink a development company it may seem justifiable to want to focus-group your game, but in dividing their resources Capcom really just made four different bad games.