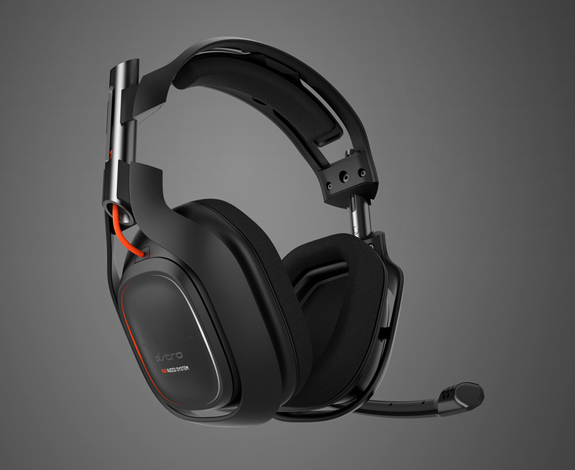 Someone once labeled current gaming headset star Astro Gaming the “Beats of gaming,” referring to the enormously successful Beats by Dre product line of consumer headsets. It’s a comparison Astro itself seems eager to encourage and, while aligning your company with such a ubiquitous brand name makes sense financially, more discerning audiophiles are quick to point out that most of the cash you shell out for a pair of Beats is for name-brand style rather than for sound.

However, Astro Gaming seems to be looking to the Beats phenomenon more as a guide to positioning itself at the top of the industry for premium gaming headphones. The market isn’t exactly teeming with game-specific headsets, so when I say the new Astro A50 (Astro Gaming, $299) headphones are some of the best money can buy in this category it doesn’t automatically mean they’re mind-blowing. It does suggest that Astro’s first big release in three years is conclusively about looking towards the future rather than playing catch-up.

A local San Francisco company, Astro has made a name for itself by selling headsets solely on its own website, and, with the release of the A50, it hopes to expand the web store into a downtown retail space. Gaming is in the process of legitimizing itself for mature players and Astro wants a place in that richer realm, not just for posterity’s sake but because we’re talking about a market that’s growing every day. As the average age of game players rises (currently somewhere between 30 and 35 years old), the industry has seen a rise in gamers and tech enthusiasts with considerably deeper pockets.

Linchpin to Astro’s success is the A50.The wireless A50 headset offers a 5.8 GHz upgrade to the A40s, the best currently on the consumer market. If you like having friends over to play, one base station supports up to 4 voice streams, and all with zero compression. Physically, the sets are heavier, so more padding makes them somewhat bulky. But the size helps comfort and noise reduction, on both sides of the velvety cups, and quality metal parts mean they don’t look or feel like cheap toys.

Set-up is simple. Plug the base station into your console (or audio tuner, and pass-through the TV, which allows you to watch movies and TV with the headset) and you’re synched and set. The set is fully rechargeable, a nice feature, though it charges via USB, so if it’s plugged into your TV or console, it won’t charge while those are off. The idea is that these headphones work right out of the box, offer few problems, and, outside of initial tinkering to get them just how you want them, you might not need to touch anything ever again.

As for sound, the set features a high number of volume stops, Dolby Digital 7.1 “surround” sound and 3 different, customizable sound modes. The faux-surround sound does a pretty good job of mimicking real surround speakers and the attached microphone turns on and off automatically when you bring it into position. There’s a lot of power in the set, a good sense of space, and I didn’t notice any distortion. The most important aspect is the quality of the wireless, something that can be tough to nail in a room increasingly packed with wireless devices. I have a lot of wireless junk, all running at the same time in the same room, and didn’t hear a single pop or click from my A50s, a problem that plagued my old Turtle Beach set.

One wireless snafu deserves mentioning: Microsoft has an exclusive deal with Tritton headsets for wireless chat, and all non-Tritton headsets require you to plug the headset into your controller. This lack of direct Xbox support may disappoint some users, but it’s not Astro’s fault and comes with the territory.
Like past products, the A50 also sports detachable and customizable “tags.” The area of plastic that covers each ear is removable and replaceable with new tags that sport game logos, characters or original art. The customizable aspect of the headphones implies Astro intends the A50s to A) last, and B) be shown off.

You might say if it ain’t broke why fix it, but with three years since the Astro A40 debut, it was not unreasonable to expect something of a revolution. Perhaps the A50 isn’t for the truly discerning audiophile, but it is a refinement of everything Astro has become synonymous with: style, comfort, flexibility, and customization. As long as they continue to include quality in that list, Astro’s likely to come out on top.